NEW YORK (AP) — Whole Foods saw a key sales figure fall for the fourth straight quarter as it fights to distinguish itself from a growing number of competitors that it says may offer "good enough" alternatives that are more convenient. The Austin, Texas-based company said Wednesday that sales... 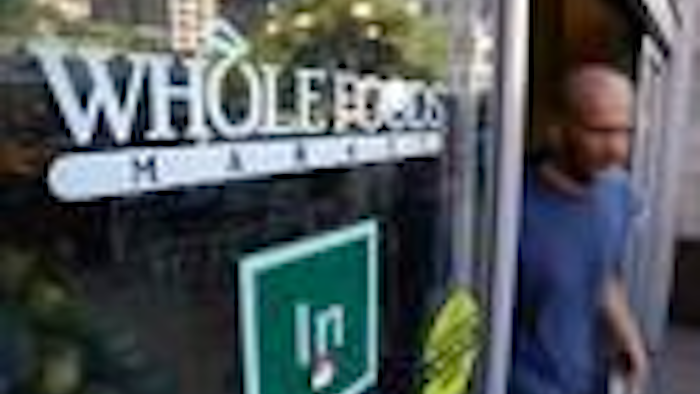 NEW YORK (AP) — Whole Foods saw a key sales figure fall for the fourth straight quarter as it fights to distinguish itself from a growing number of competitors that it says may offer "good enough" alternatives that are more convenient.

The Austin, Texas-based company said Wednesday that sales declined 2.6 percent at established locations for the three months ended July 3 as customer visits dropped. For the current quarter so far, the figure is down 2.4 percent.

"It's very, very competitive out there," co-CEO Walter Robb said during the company's earnings call.

"That's the world we're in, and customers have lots of choices," he added.

In addition to other natural and organic grocers, the company cited pressure from restaurant chains, meal-delivery companies and traditional supermarkets such as Kroger.

Co-CEO John Mackey said people might not be driving as far as they used to because they can now get "good enough" alternatives closer to home. He noted that there's overlap in the products Whole Foods and its competitors offer.

"There's no sense in denying it," Mackey said.

Those pressures underscore why Whole Foods Market Inc. is trying to broaden its appeal by keeping down prices, in part by pushing more of its 365 house brand products. The company also started a new chain named after 365, which has a minimalist design and lower costs that better position it to compete with Trader Joe's.

Only two 365 locations have opened so far, and executives said it's too early to share details on how they've been performing. But they said the stores appear to be drawing different types of customers from those who go to Whole Foods.

The new chain would be in addition to the company's 455 namesake locations in the U.S, Canada and the United Kingdom.

The 365 chain, which does not have meat counters, is also serving as a model for reducing operational costs at the flagship stores. Whole Foods has said it will slash $300 million in costs to help it navigate slumping sales.

Whole Foods is also exploring other avenues for growth, including meal kit delivery.

"There's a lot of people in the Willy Wonka factory working on this," Robb said.

For its fiscal third quarter, Whole Foods Market Inc.'s profit fell to $120 million, or 37 cents per share, in line with Wall Street expectations.

A year ago, the company earned $154 million, or 43 cents per share. For its fiscal fourth quarter, it said it expects earnings of 23 cents to 24 cents per share. That was a penny short of Wall Street expectations.

Total revenue rose to $3.7 billion, but was just short of the $3.72 billion analysts expected, according to FactSet.