NEW YORK (AP) — The Latest on the "Pokemon Go" smartphone game craze (all times EDT): 12:30 p.m. A Michigan man with a warrant for his arrest has been taken into custody after showing up at a Detroit-area police station while playing the "Pokemon Go" game. The Detroit News reports that ... 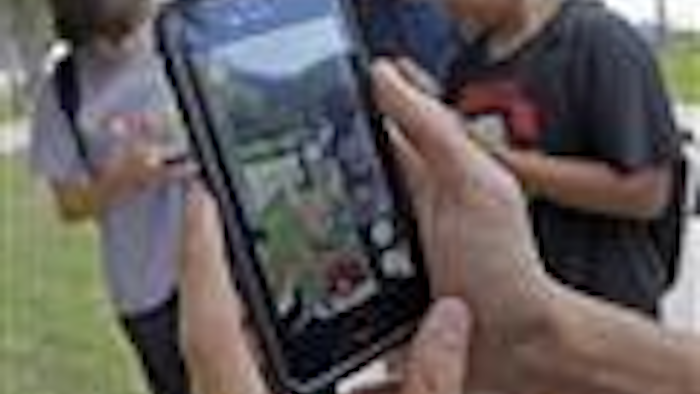 A Michigan man with a warrant for his arrest has been taken into custody after showing up at a Detroit-area police station while playing the "Pokemon Go" game.

The Detroit News reports that Milford police say the 26-year-old, who was wearing pajama pants, rode a bike to the Milford station Thursday.

Police Chief Tom Lindberg says officers recognized him because they've had contact with him in previous years. He was booked on a warrant for missing a court date and released. The newspaper says he was originally charged with breaking and entering.

The location-aware smartphone game gives digital incentives like "Pokeballs" as rewards for visiting real places, known as "Pokestops" and "Gyms." According to Milford police, the station is the site of a "Gym" as part of the game.

A man is recovering from minor injuries he suffered when he crashed his brother's car into a tree in central New York while playing "Pokemon Go" on his smartphone.

Authorities say Cary suffered a broken ankle and cuts to both legs. Police Chief Shawn Butler says his injuries could've been worse because the impact of the crash nearly sent the engine into the passenger compartment.

Cary was ticketed for using a mobile device while driving and failing to remain in his lane.

Butler says the car, which was totaled, belonged to Cary's brother. The police chief says Cary was visiting his mother at the time of the crash.

Kuwait is saying "no" to "Pokemon Go" in certain places.

It also warned users not to pounce on Pikachus or chase Charmanders at mosques, shopping centers, malls and oil installations.

Lt. Gen. Sulaiman al-Fahad at the ministry said: "No excuses will be accepted by anyone claiming ignorance of the law."

Though "Pokemon Go" hasn't officially come to nations in the Persian Gulf, many have downloaded the app. Authorities in the United Arab Emirates also have warned users to be careful while chasing digital critters in the augmented reality game.

Police say a man's body was recovered from a brook behind the New Hampshire Holocaust Memorial after it was spotted by someone playing the smartphone-app game "Pokemon Go."

Lt. Robert Giggi tells WMUR-TV that the player was looking in obscure places in connection with the game Thursday. Giggi said apparently, that's what "brought the person that found the victim to that area."

An autopsy was planned.

The body was found near Rotary Park, the location of the Holocaust memorial. This week, the U.S. Holocaust Memorial Museum and Arlington National Cemetery requested that smartphone users refrain from "catching" Pokemon when they visit. The museum is a Pokestop — a place where players can get free in-game items.

Last week, a woman playing the game in Wyoming found a man's body in a river.

German police say they've arrested an 18-year-old man who was wanted for evading a prison sentence after he ventured out to play the newly launched "Pokemon Go" smartphone game with friends.

Police in Trier, on Germany's western border, said the group's "peculiar behavior" as they played the game in the city on Friday prompted officers to check their papers.

The 18-year-old initially gave a false identity but police quickly established that there was an arrest warrant out for him. He was detained and is now serving a six-month prison sentence he had previously avoided serving — police wouldn't specify for what.

The app was officially rolled out in Germany earlier this week.

The game has sparked a frenzy of players wandering around U.S. cities hunting for "pocket monsters" to fight.

Power companies are warning players of the "Pokemon Go" smartphone app to stay away from electrical facilities.

AEP Ohio is cautioning players after learning that discussions were suggesting electric-type Pokemon could be caught near substations and transformers. The company says such facilities are dangerous and not to be considered gaming locations.

Meanwhile, the Baldwin Electric Membership Cooperative in Alabama says electric utilities cannot control where the Pokemon appear, making it important for players to make sure they catch their Pokemon safely.

Baldwin EMC spokesman Mark Ingram says the company hasn't received any calls about players visiting substations looking to catch Pokemon, but is trying to be proactive about warning users of the dangers they could face around electrical equipment.

The statement also says parents should talk to children who play the game about how to be safe around electricity.

The Japanese game maker Nintendo, which suffered as a latecomer to smartphone games, is seeing the deep wealth of its franchise characters pay off with the success of "Pokemon Go," even without a launch yet in Japan.

Nintendo was starting to look like a casualty of history after missing both the online and mobile revolutions.

The popularity of "Pokemon Go" says much about the untapped value of cultural properties — at least when you're lucky enough to deploy them in the right place at the right time.

The windfall could help reverse Nintendo's fortunes, although some analysts believe its impact on the company's revenues will be limited because the game is free apart from certain revenue-earning features.

Nintendo's original "Pokemon" game featured adventurous wanderings through a fantasy world to collect cute, imaginary monsters. "Pokemon Go" involves finding digital creatures that pop up in the screen of your mobile device as you move about the real world.

Busch Gardens is getting in on the "Pokemon Go" craze and will hold a lure-a-thon where players can try to level up as many Pokemon as possible.

The Tampa, Florida, theme park says the lure-a-thon will be held from 10 a.m. to 3 p.m. Saturday. Players can roam the park with their cellphones, looking for cartoon monsters.

Park Pass Members will get exclusive access to seven PokeStops with activated lure modules in the Egypt area of the park from 8:30 to 9:30 a.m.

Park admission is required to enter and play.