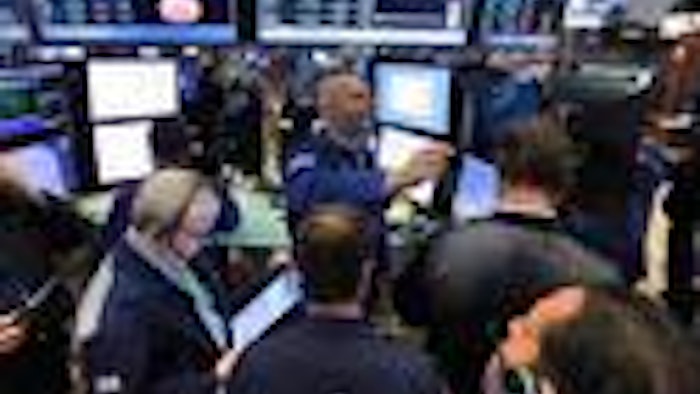 OUT OF WORK: The Labor Department said applications for unemployment benefits rose to the highest level since February 2015. That comes after a disappointing jobs report for April. Applications rose by 20,000 to 294,000. Despite the increase, they have remained below 300,000 for more than a year.

MORE RETAIL WOES: Department store Kohl's said its sales dropped and its income was weighed down by high costs. The company's results suffered as it discounted some items to clear out inventory. The stock fell $4.25, or 11 percent, to $34.45.

Retailers have been struggling for months. Macy's slashed its profit forecast Wednesday following its quarterly report, and Gap posted worse-than-expected April sales on Monday. Macy's lost another 71 cents, or 2.3 percent, to $30.67.

DEAL TALK: Bloomberg News reported that German chemical and pharmaceutical company Bayer might make an offer for U.S.-based Monsanto. That follows a wave of consolidation in the chemicals industry: DuPont and Dow Chemical agreed to combine last year, and ChemChina agreed to buy Syngenta of Switzerland in March. Monsanto stock climbed $8.27, or 9.2 percent, to $98.61.

Data security company Infoblox surged $3.29, or 21.5 percent, to $18.60 after Bloomberg reported that a private equity firm offered to buy it.

EAT UP: Burger chain Jack in the Box reported strong results, including better sales at its Qdoba Mexican restaurants. Its stock jumped $9.42, or 14.5 percent, to $74.56.

CARDED: Payment card company CPI Card Group reported disappointing results as shipments of chip-enabled cards were lower than expected. The company said the market is struggling in the U.S. and cut its guidance because credit card companies aren't buying and issuing as many of the cards as expected.

AP Markets Writer Marley Jay can be reached at http://twitter.com/MarleyJayAP His work can be found at http://bigstory.ap.org/journalist/marley-jay