North Korea willing to reconcile unless Seoul 'opts for war'

PYONGYANG, North Korea (AP) — North Korea's ruling party adopted a resolution on the third day of its first full congress in 36 years to strive toward a more prosperous and modern economy and stressed that it will push for the peaceful reunification of Korean Peninsula, but warned that if Seoul... 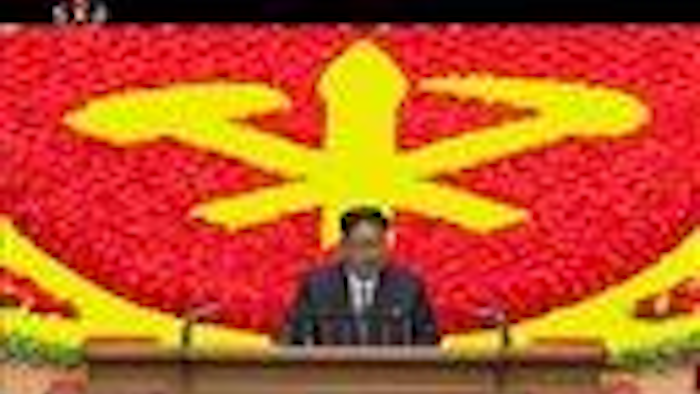 PYONGYANG, North Korea (AP) — North Korea's ruling party adopted a resolution on the third day of its first full congress in 36 years to strive toward a more prosperous and modern economy and stressed that it will push for the peaceful reunification of Korean Peninsula, but warned that if Seoul "opts for a war" its military will mercilessly wipeout all opposition.

The resolution was adopted by the congress on Sunday, but foreign journalists brought into the country to cover the biggest political event in North Korea in decades have not been allowed inside the meeting hall to see the proceedings and must rely on the North's state-run media, which has been reporting the events hours later, or even on the following day.

A Korean Central News Agency report Monday said the congress was to enter its fourth day after hearing a three-hour speech by leader Kim Jong Un the previous day reviewing the country's situation and progress since the last congress was held in 1980, before Kim was born.

In his speech, Kim announced a five-year economic plan, the first one made public since the 1980s, when his grandfather, "eternal president" and national founder Kim Il Sung, was in power.

The speech, in which he said North Korea was a responsible nuclear state that will not use its nuclear weapons first unless its sovereignty was threatened, underscores Kim's dual focus on building up the military while trying to kick-start the North's economy, which has seen some growth in recent years but remains hamstrung by international sanctions over its nuclear program.

Walking a fine balance between the two, he said the North is willing to develop friendly relations even with countries that had in the past been hostile toward it — a possible overture to the United States.

But he made clear that the North has no intention of unilaterally giving up its nuclear program or bending to international pressure aimed at forcing its regime into decline or collapse.

Kim said North Korea "will sincerely fulfill its duties for the nonproliferation of nuclear weapons and work to realize the denuclearization of the world," but that statement is predicated on other countries — again, mainly the United States — also giving up their weapons, a highly unlikely scenario.

The congress is something of a formal inauguration for Kim Jong Un, who became leader after his father's death in 2011.

But it also suggests he is more oriented toward working through the party and formal government organs to achieve his goals, unlike Kim Jong Il, who never called a party congress and preferred to work through his own personal network of trusted individuals to get things done.

On South Korea, Kim Jong Un stressed the need for talks to ease cross-border animosities and emphasized reunification under a federal system, a decades-old proposal that would largely keep the North's brand of socialism intact that has received no traction with Seoul.

"But if the South Korean authorities opt for a war, persisting in the unreasonable 'unification of social systems,' we will turn out in the just war to mercilessly wipe out the anti-reunification forces and achieve the historic cause of national reunification, long-cherished desire of all Koreans," he said.

Though North Korea appears to be making significant progress in developing what it calls a nuclear deterrent, its economy is still recovering from the collapse of the Soviet Union and its East bloc allies and a massive famine in the 1990s. It depends heavily on trade with China and has fallen light years behind its southern rival.

Kim identified a number of key areas, including the country's power supply, agriculture and light-manufacturing production, as critical parts of the program. Kim stressed that the country needs to increase its international trade and engagement in the global economy, but didn't announce any significant reforms or plans to adopt capitalist-style marketization.

Detailing the economic policy in such a public way demonstrated that Kim is taking ownership of the country's economic problems, something his father avoided as leader.

Kim has promised to improve living standards and the focus of the congress on the economy reflects that. But it was also decidedly conservative in its wording — giving no hint that fundamental changes are in the offing on how the state-run economy functions.

Market-style business has become more common in North Korea, in large part because of its economic crisis and famine of the 1990s, which made it impossible for the government to provide its citizens with the necessities and forced many to learn how to fend for themselves.

But while the realities on the ground have shifted, officials have been reluctant to formally embrace significant reforms as state policy.

Even so, the North has given individual enterprises more autonomy in managing themselves so that they can become more efficient.

That has led to increased salaries for better-performing workers and, to some extent, increased production on at least some farms, where farmers have more incentive to produce more so that their own take — what's left after meeting government quotas — is bolstered and can be sold in markets for a profit.

Still remaining on the agenda of the congress, which gathers more than 3,400 delegates at the ornate April 25 House of Culture, are elections to give Kim the party's top post — he is already its first secretary, and his father posthumously holds the title of "eternal general-secretary" — and for other party leadership positions.

Though no date has been announced, and surprises can never be ruled out, the congress was expected to go on for a couple more days.

Mass rallies will likely be held to mark its conclusion in a celebratory fashion.