WASHINGTON (AP) — Her intent was to mar the voting record of her rival. But Hillary Clinton also cast aspersions on the presidential record of her husband in testy exchanges with Bernie Sanders over Wall Street regulation. A look at some of the claims in Thursday night's Democratic presidential... 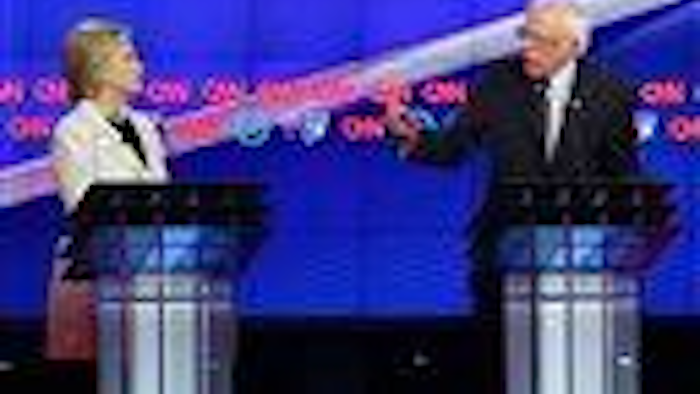 WASHINGTON (AP) — Her intent was to mar the voting record of her rival. But Hillary Clinton also cast aspersions on the presidential record of her husband in testy exchanges with Bernie Sanders over Wall Street regulation.

A look at some of the claims in Thursday night's Democratic presidential debate and how they compare with the facts:

CLINTON: "I'm the only one on this stage who did not vote to deregulate swaps and derivatives, as Sen. Sanders did ... and that contributed to the collapse of Lehman Brothers and started the cascade."

THE FACTS: The legislation in question was signed into law by President Bill Clinton.

Hillary Clinton was in no position to vote for — or against — it because she was not in the Senate at the time. It's true that Sanders voted for the Commodity Futures Modernization Act of 2000, which deregulated many financial instruments that were later blamed for intensifying the 2008 financial crisis. Once it passed Congress, Bill Clinton signed it. Hillary Clinton, who became a senator in 2001, is always quick to credit her husband's economic management, but in this exchange she essentially, if inadvertently, pinned part of the responsibility for the meltdown on the stroke of his pen.

She said the deregulation contributed to Lehman's collapse and that, along with a few big failures in the insurance and mortgage industries, "actually caused the Great Recession."

SANDERS: "When this campaign began, I said that we got to end the starvation minimum wage of $7.25, raise it to $15. Secretary Clinton said let's raise it to $12. There's a difference."

CLINTON: "I have said from the very beginning that I supported the fight for $15."

THE FACTS: It depends on what the meaning of "minimum" is. Clinton has said she supports legislation that calls for a $12-an-hour wage floor, and would encourage some cities and states to push it as high as $15. The graduated scale is a response to concerns that some localities would not be able to support a $15 minimum without suffering a loss of jobs.

CLINTON: "I stood up against the behaviors of the banks when I was a senator. I called them out on their mortgage behavior."

SANDERS: "Oh my goodness, they must have been really crushed by this."

THE FACTS: Sanders had reason to be sarcastic about Clinton's claim. She has repeatedly cited a speech she gave to the financial industry in December 2007 as proof that she gave Wall Street a dressing down for its behavior as the sector slipped into crisis. In reality, she delivered a much more mixed message.

In a video of the speech obtained by ProPublica, she thanked her "wonderful donors" in the audience, said banks were not the main villains in the emerging crisis, "not by a long shot," and praised Wall Street for its contribution to the economy. At the same time, she said Wall Street had a hand in worsening the crisis and called for voluntary steps on foreclosures and subprime mortgages.

SANDERS: "It turns out that both Verizon and General Electric, in a given year, pay nothing in federal income tax despite making billions in profits."

THE FACTS: In some years, yes. But altogether, they've been paying corporate income tax over the past 15 years, while cutting their tax bills far below the 35 percent corporate rate, according to one analysis.

The analysis by Citizens for Tax Justice, a left-of-center think-tank that looked into the two companies' annual reports, found that Verizon has paid an average tax rate of 12.4 percent over the last 15 years, while paying none for five of those years. General Electric paid an average of only 5.2 percent over the past 15 years, the analysis found — and none over the last decade.

The CEOs from both companies assert they do pay their fair share. Verizon's CEO, Lowell McAdam, says the company paid 35 percent of its income in taxes in 2015, an assertion the think-tank disputes. GE CEO Jeffrey Immelt, in an April 6 column in The Washington Post, said the company pays "billions" in federal, state and local taxes, but was not more specific.