food chains would get some relief from government rules on listing calories for things like bacon-wrapped deep dish pizza or double cheeseburgers under legislation the House approved on Friday. The vote was 266-144. The legislation now heads to the Senate, where its fate is uncertain. The Obama... 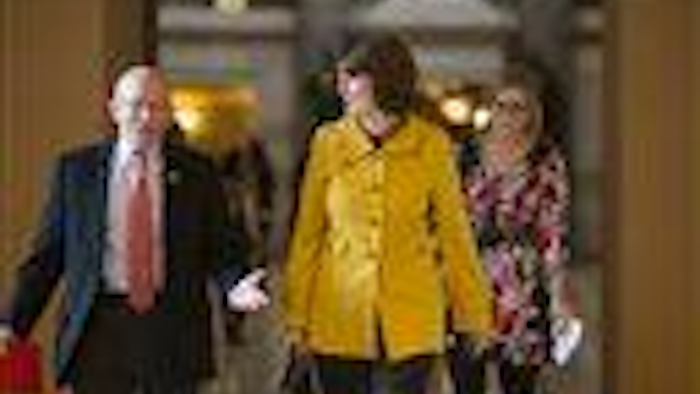 food chains would get some relief from government rules on listing calories for things like bacon-wrapped deep dish pizza or double cheeseburgers under legislation the House approved on Friday.

The vote was 266-144. The legislation now heads to the Senate, where its fate is uncertain. The Obama administration said it opposes the measure though it stopped short of threatening a presidential veto

Republicans say the calorie labeling rules scheduled to go into effect this year are too burdensome, and they have sought to ease the requirements and lessen potential financial penalties for businesses that have to comply. Many restaurants and other food retail outlets, such as grocery stores, will have to post the calorie labels by December.

The FDA rules will require restaurants and other establishments that sell prepared foods and have 20 or more locations to post the calorie content of food "clearly and conspicuously" on their menus, menu boards and displays. That includes prepared foods at grocery and convenience stores and in movie theaters, bakeries, coffee shops, pizza delivery stores and amusement parks.

The bill by Rep. Cathy McMorris Rodgers, R-Wash., would leave the Food and Drug Administration rules requiring the labeling in place but make it easier for some businesses to comply.

"This bill at its very core is about flexibility," McMorris Rodgers said during House debate.

Republican Rep. Fred Upton, whose state of Michigan is home to Domino's Pizza, said it made no sense to require that calories be posted on a menu board at the fast-food chain's locations when some 90 percent of orders are placed online.

Democrats argued that people want more information, not less, when deciding what to eat.

Rep. Jan Schakowsky, D-Ill., who said she fought in the 1970s to get expiration dates on food, said the calorie labeling rules would help consumers make better decisions. She said it is critical at a time when more than 70 million Americans are obese, at a cost estimated to be $147 billion a year.

"This unnecessary legislation would deny consumers critical information about the food they eat," she said.

The administration, in a statement this week, said the bill "would reduce consumers' access to nutrition information and likely create consumer confusion by introducing a great deal of variability into how calories are declared."

The legislation would narrow labeling requirements for supermarkets, which have complained that the rules are confusing and broad, by allowing stores to use a menu or menu board in a prepared-foods area instead of putting labels on individual items.

It would also allow restaurants like pizza chains that receive most of their orders remotely to post calories online instead of at the retail location. Pizza restaurants would also have more flexibility in the way they post calories, and restaurants and retailers could determine what constitutes a serving size, in some cases.

In addition, the bill seeks to ensure that establishments aren't punished for mislabeling due to inadvertent human error.

The menu labeling rules were first required by Congress in 2010, but FDA took several years to write them as the supermarkets, convenience stores and pizza companies aggressively lobbied against them.