NEW DELHI (AP) — French President Francois Hollande began a three-day visit to India on Sunday that could push a multibillion-dollar deal for combat airplanes and closer cooperation on counterterrorism and clean energy. Hollande landed in the northern city of Chandigarh where Indian Prime... 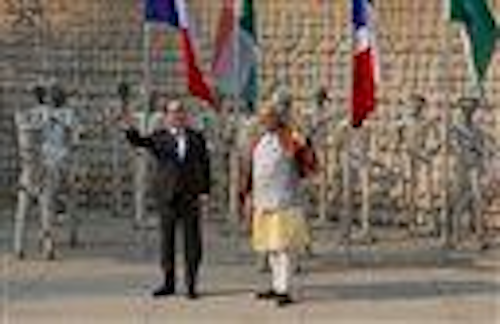 NEW DELHI (AP) — French President Francois Hollande began a three-day visit to India on Sunday that could push a multibillion-dollar deal for combat airplanes and closer cooperation on counterterrorism and clean energy.

Hollande landed in the northern city of Chandigarh where Indian Prime Minister Narendra Modi joined him at official engagements and lauded France's decision to invest $1 billion every year in India in various sectors.

Chandigarh was designed in the 1950s by Swiss-French architect Le Corbusier and is one of three places France has pledged to help develop as so-called "smart cities" - with clean water supplies, efficient sewage disposal and public transportation.

Hollande and French business leaders met with their Indian counterparts to boost bilateral trade, which in 2014 was $8.6 billion. New Delhi is also trying to encourage French companies to tap into India's economic boom.

Modi in his speech said India was looking forward to French expertise in defense production, developing railways and waterways, and fighting global warming and terrorism.

Hollande is accompanied by the ministers of defense, foreign affairs, economy and culture and dozens of top corporate leaders.

On Sunday, Airbus Helicopters and India's Mahindra Defense, a private company, signed a "statement of intent" in the presence of the two leaders to produce military helicopters in India as a joint venture.

"Mahindra India and Airbus Helicopters have agreed on a blueprint that can put India on the world map for military helicopter manufacturing," said Pierre de Bausset, president of the Airbus Group India. Details were not immediately known.

Hollande will hold talks with Indian leaders in New Delhi on Monday and be a guest of honor on Tuesday at India's Republic Day parade, celebrating 66 years since the country adopted its constitution.

High on the agenda is India's desire to purchase 36 Rafale combat planes for its air force, which Modi had announced during a visit to Paris in April, touching off several rounds of negotiations over pricing, offsets and servicing.

In an interview with the Press Trust of India news agency, Hollande hinted it might take some more time to sign the deal.

"Agreeing on the technicalities of this arrangement obviously takes time, but we are on the right track," PTI quoted Hollande as saying.

"Our bilateral relationship with France is very comprehensive. It covers a number of sectors such as defense, civil nuclear cooperation, railways, smart cities, science and research, space and culture. In all these areas we expect some forward progress during the French president's visit," Vikas Swarup, India's External Affairs Ministry spokesman, said last week.

The two sides are also expected to touch on anti-terrorism efforts including speeding up extradition requests and cracking down on money laundering used to fund militant activities.

Swarup noted that both countries had been hit by militants recently, with 130 people killed across Paris on Nov. 13 and a four-day siege against the north Indian air force base of Pathankot earlier this month in which seven Indian soldiers were killed.