LAS VEGAS (AP) — Weapon enthusiasts had their sights set on the latest and newest guns and gear at a big industry trade show this week, not on President Barack Obama's efforts to tighten gun-ownership regulations following mass shootings around the country. "America is a culture of guns,"... 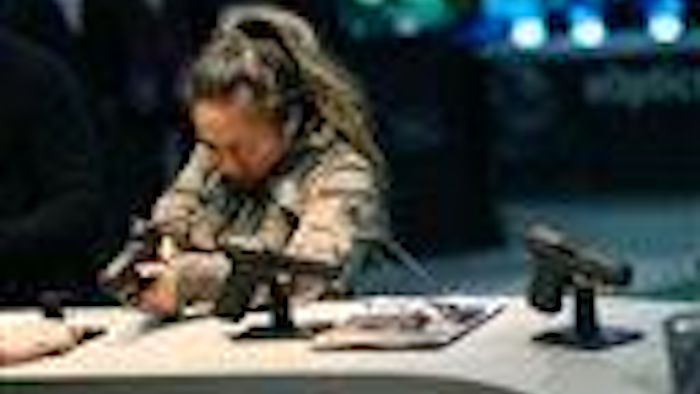 LAS VEGAS (AP) — Weapon enthusiasts had their sights set on the latest and newest guns and gear at a big industry trade show this week, not on President Barack Obama's efforts to tighten gun-ownership regulations following mass shootings around the country.

"America is a culture of guns," SilencerCo chief executive Josh Waldron said Wednesday at the Shooting, Hunting and Outdoor Trade Show in Las Vegas. "Americans will not stand for politicians taking their guns away."

"The president has done everything he can do to pass anti-gun legislation," Waldron added, "and let's face it, he hasn't been able to do anything other than help an industry sell more guns than ever."

Gun production and sales have doubled since 2007 when Obama took office, said Lawrence Keane, senior vice president and attorney for the show host, the National Shooting Sports Foundation. Sales spike after every headline-grabbing mass shooting like the recent ones in Paris and San Bernardino, California.

Almost one almost one in three Americans is a gun owner, Keane said. He tallied about 350 million guns in circulation.

"The face of the consumer is more diverse — women, minorities, younger and urban," Keane said. Sales surge "when you have an event that causes people to talk about the issue and causes people to be concerned about their safety."

"Guns will clearly be one of the big issues this November," he said, referring to the presidential and congressional elections.

Republican presidential candidates and conservative lawmakers have condemned the president's move as an overreach of executive power and an infringement of constitutional rights to gun ownership.

Some of the 62,000 credentialed attendees walked amid miles of aisles on the showroom floor in Las Vegas, ogling and handling chrome six-shooters, knives, body armor and assault-style weapons. The Shooting, Hunting and Outdoor Trade Show isn't a sales event. No one can buy guns or gear on the spot.

Show-goer Rhiannon Owen, co-owner with her husband of a San Antonio, Texas, body armor company, said people have a right to protect themselves. "And because of the political climate in our country, more people are becoming involved," she said.

Owen sells a $300 kit to protect a person from anything up to a .308-caliber bullet. It can be carried in a gym bag or kept next to a bed to don quickly if the owner is threatened by someone with a gun. Schoolteachers could be equipped with ballistic blankets and custom locks for classroom door hinges to protect children, she said.

Gun-control advocate Dan Gross, president of the Brady Campaign to Prevent Gun Violence, derided the idea of making schools "more like armories than places of education ... where our only solutions are to deal with active shooters."

"There is so much more we can do to keep guns out of the hands of those intent on doing harm in the first place," Gross said by email.

He cited the nearly 34,000 gun deaths tallied nationwide in 2010 by the federal Centers for Disease Control, and a separate 2014 report from the nonprofit Violence Policy Center advocacy group that more people die from guns than from vehicle crashes in 21 states and the District of Columbia.

The Brady Campaign wants background checks expanded to all gun sales, including at gun shows and online.

Waldron predicted the FBI and the federal Bureau of Alcohol, Tobacco, Firearms and Explosives will have trouble processing a wave of new fingerprint cards, photos, and background checks.

Keane said the shooting sports foundation hosts a campaign called FixNICS.org to encourage states to report to the FBI's NICS database all mental health and criminal records of anyone prohibited from owning a firearm under current law.

On the trade show floor, more than 30 ATF agents fielded questions at an information booth about whether Obama's actions mean that casual gun owners will need to get federal firearm sales licenses.

"We're listening to what people are telling us," ATF spokesman Corey Ray said. "Someone has a collection at home and wants to sell the guns. They wonder if they need a firearms license."

They don't, Ray said. "Not if they aren't engaged in the business and aren't making a living doing it," he said.