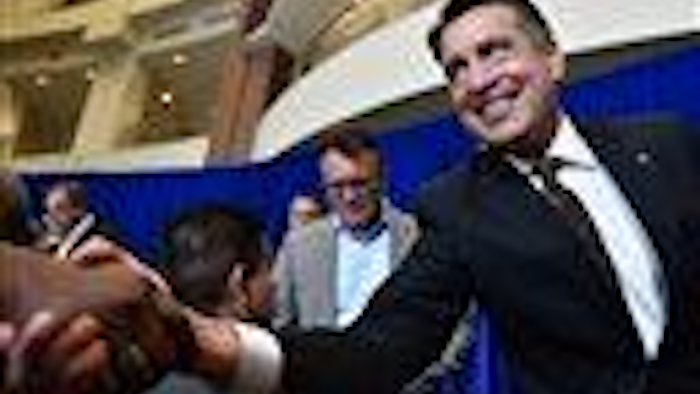 Gov. Brian Sandoval has signed four bills into law to seal a $335 million deal that will bring electric carmaker Faraday Future to Nevada.

Sandoval held a brief ceremony at the Nevada Capitol late Saturday afternoon and congratulated lawmakers for cementing the deal during a four-day special session. Bills finalized Saturday authorize $215 million in tax breaks, and clear the way for $120 million in infrastructure improvements near Faraday's planned factory.

The Republican governor said he's excited about the prospect of young Nevadans getting well-paid jobs at the $1 billion plant in North Las Vegas. The factory is expected to employ 4,500 workers and create another 9,000 indirect jobs.

Sandoval said Nevada's proud of its casino and mining industry, but wants to keep up with the industries of the future.

The Nevada Legislature is adjourning from a four-day special session after passing a $335 million incentive package for electric carmaker Faraday Future.

The session formally ended at about 4 p.m. on Saturday.

Lawmakers approved four bills clearing the way for the car factory after working out disagreements on water rights and infrastructure bonding terms.

An effort to call an additional special session shortly after failed to materialize. Democratic Sen. Ruben Kihuen wanted lawmakers to ban guns for people on a federal no-fly list, but didn't get support beyond Senate Democrats.

The state Legislature voted overwhelmingly in favor of the deal Saturday, after a four-day special session in Carson City.

Nevada triumphed over California, Louisiana and Georgia in the bid to land the factory, which is expected to employ 4,500 people and spur another 9,000 indirect jobs.

The state will offer $215 million in tax credits and abatements, and publicly finance $120 million in infrastructure at a North Las Vegas industrial park.

Gov. Brian Sandoval is expected to sign the bills.

Nevada Assembly members are vetting two bills aimed at supplying water to the desert land that could be carmaker Faraday Future's new home.

Lawmakers reviewed SB2 and SB3 on Saturday morning. One bill allows water rights to be allocated more quickly for major economic development projects, and another designates Southern Nevada Water Authority and the Las Vegas Valley Water District as Apex Industrial Park's suppliers, rather than the City of North Las Vegas.

The Nevada Assembly is reviewing three bills as a $335 million incentive package for carmaker Faraday Future hits its home stretch in the Legislature.

Lawmakers started the fourth day of a special session at about 8 a.m. on Saturday. Republican Assembly Majority Leader Paul Anderson said the legislators would spend the morning learning and raising questions about the bills, then would come together in the afternoon for final deliberations and possibly votes.

The bills include a measure authorizing $215 million in tax incentives to the electric carmaker and financing $120 million in infrastructure improvements in North Las Vegas.