GE Aviation has been flight testing jet engines in Victorville in the Mojave Desert for more than a decade. But never one like the LEAP, the world’s first jet engine with 3D-printed fuel nozzles and parts from advanced ceramic materials. The engine, which was developed by... 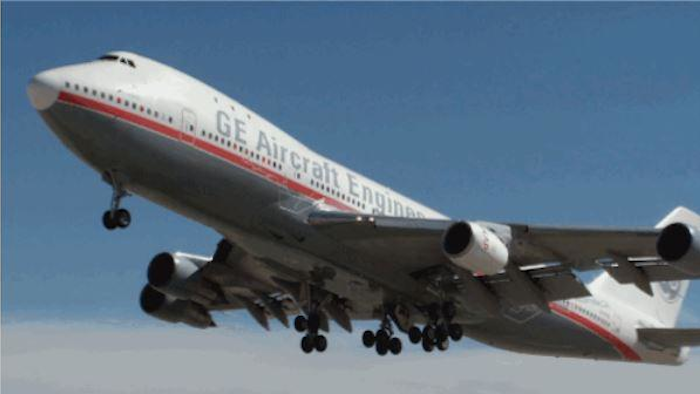 GE Aviation has been flight testing jet engines in Victorville in the Mojave Desert for more than a decade. But never one like the LEAP, the world’s first jet engine with 3D-printed fuel nozzles and parts from advanced ceramic materials. The engine, which was developed by CFM International, a joint venture between GE and France’s Snecma (Safran), flew for the first time in October. CFM has received more than $100 billion in orders and commitments (U.S. list price) for over 7,700 LEAPs, even though they won’t enter service until 2016.

In the third quarter of 2014, for which GE announced results today, the company also received its first orders for its newest engine, the GE9X. Emirates, Etihad, and Lufthansa put in orders valued at $3.8 billion. The engine, which GE is developing for Boeing’s next-generation 777X long-haul planes, is full 11 feet in diameter. Like the LEAP, it will also include advanced composites, ceramics, and 3D-printed parts. The engines will enter service in 2020.

Discussing the quarter’s earnings, GE Chairman and CEO Jeff Immelt pointed out that innovation helped deliver other recent highlights, like 1,000 orders for GE Transportation’s most advanced Tier 4-compliant locomotive and 13 new HA-class gas turbines, the largest and most efficient of its kind in the world.

The locomotive, for example, is the first engine that can satisfy new U.S. emission standards, which will go into effect in January 2015. The HA turbine can generate 500 megawatts and has a combined heat and power efficiency exceeding 61 percent, a benchmark that has been called the Holy Grail in the power generation business. “GE performed well in the quarter, with industrial segment profit growth of 9 percent and significant margin expansion,” Immelt said. “The environment is volatile, but infrastructure growth opportunities exist, and GE is executing well.”

Immelt’s quarterly earnings call with investors also included a presentation by GE Healthcare Life Sciences. This GE business is developing technologies supporting companies on the leading edge of medicine. These customers are involved in drug discovery, advanced diagnostics and bioprocessing, which is using living cells to produce components for a new generation of drugs called biopharmaceuticals.

With advances in biomedicine, biopharmaceuticals have become the fastest growing class of drugs. They have a market size of about $100 billion and account for a quarter of all spending on drugs.

In March 2014, Life Sciences completed a $1 billion acquisition of three businesses from Thermo Fisher Scientific. The businesses are developing and manufacturing the media and sera for growing cells, and aiding with protein analysis and biomedical drug discovery. “There is a lot of vibrancy in terms of demand for these products from the growth markets,” said Nigel Darby, vice president of biotechnologies and chief technology officer at GE Healthcare Life Sciences. “This correlates with the best growth opportunities.”

The Thermo Fisher acquisition ties into GE’s push into high-growth areas, its return to industrials and the sale of non-core businesses. During the last quarter, GE completed the IPO of its North American retail finance unit, Synchrony Financial, the first step of a planned, staged exit from the business. GE is targeting a complete exit from Synchrony Financial through a split-off transaction in late 2015.

In the third quarter, GE also agreed to sell its Appliances business to Electrolux for $3.3 billion, bringing total announced dispositions to $4.7 billion for the year.  The sale still has to be approved by regulators.

Immelt also said that GE was on track to meet cost management goals as part of its “simplification” initiative. “Our total-year framework is intact, and we are executing on our goals,” Immelt said. “We have a big backlog, market diversity, strong recurring revenue and a well-established cost-out program.We expect to continue to deliver in a volatile world.”

For more news on GE innovations, check out GE Reports.