When tons of radioactive water leaked from a storage tank at Fukushima's crippled nuclear power plant and other containers hurriedly put up by the operator encountered problems, Yoshitatsu Uechi was not surprised. He wonders if one of the tanks he built will be next. 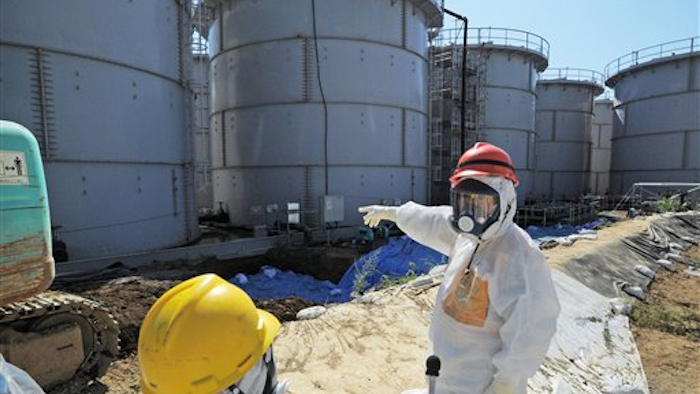 TOKYO (AP) -- When tons of radioactive water leaked from a storage tank at Fukushima's crippled nuclear power plant and other containers hurriedly put up by the operator encountered problems, Yoshitatsu Uechi was not surprised. He wonders if one of the tanks he built will be next.

He's an auto mechanic. He was a tour-bus driver for a while. He had no experience building tanks or working at a nuclear plant, but for six months last year, he was part of the team frantically trying to create new places for contaminated water to go.

Uechi and co-workers were under such pressure to build tanks quickly that they did not wait for dry conditions to apply anti-rust coating over bolts and around seams as they were supposed to; they did the work even in rain or snow. Sometimes the concrete foundation they laid for the tanks came out bumpy. Sometimes the workers saw tanks being used to store water before they were even finished.

"I must say our tank assembly was slipshod work. I'm sure that's why tanks are leaking already," Uechi, 48, told The Associated Press from his hometown on Japan's southern island of Okinawa. "I feel nervous every time an earthquake shakes the area."

Officials and experts and two other workers interviewed by the AP say the quality of the tanks and their foundations suffered because of haste — haste that was unavoidable because there is so much contaminated water leaking from the wrecked reactors and mixed with ground water inflow.

"We were in an emergency and just had to build as many tanks as quickly as possible, and their quality is at bare minimum," said Teruaki Kobayashi, an official in charge of facility control for the plant operator, Tokyo Electric Power Co.

Leaks and other flaws found in several tanks have raised concerns about further and more damaging failures, particularly if another big earthquake, tsunami or typhoon hits. The plant suffered a triple meltdown after Japan's devastating 2011 earthquake and tsunami.

The plant has substantially stabilized, but decommissioning is expected to take decades, and TEPCO has suffered what Industry Minister Toshimitsu Motegi has described as a "whack-a-mole" succession of mishaps.

The environmental effects of radioactive water pouring in the sea are unclear, though scientists generally agree that the impact so far has been minimal. With years of work ahead, TEPCO is trying to contain as much contaminated material as possible.

Kobayashi acknowledged the need to improve the design of tanks and their foundations when they are replaced with more durable welded-seam tanks.

The plant has more than 1,000 tanks and other containers storing 370,000 tons of partially treated but still highly contaminated water. About one-third of the containers are easy-to-assemble steel tanks with rubber-sponge seams tightened with bolts; they were always considered a stopgap measure. The other tanks are considered sturdier.

The company is in the process of replacing rubber-seam tanks with larger, more permanent welded tanks, and expects to phase out the temporary tanks by March 2016. It intends not only to replace tanks intended for temporary use but to increase storage capacity to 800,000 tons.

TEPCO has recently accelerated its construction of more reliable tanks, but announced Friday that the pace will continue to be stepped up. "The worst scenario is we run out of space, and we must avoid that," TEPCO President Naomi Hirose said at a news conference.

The company also announced emergency water management plans that also include additional tank maintenance. "I have never thought we needed so many people to take care of these tanks until two months ago," Hirose said.

The tank problems have captured international attention, especially since August, when a 1,000-ton tank lost nearly one-third of its toxic content. A month earlier, TEPCO acknowledged that larger amounts of contaminated underground water have been leaking into the Pacific.

TEPCO has dismantled and examined the tank that leaked, but found no obvious design or assembly flaw. Experts say that only widens the scope of the problem. The plant has to live with an imminent risk of more leaks that could spread contamination farther into groundwater and the sea.

"We should assume any tank could leak sooner or later," said Toyoshi Fuketa, a Nuclear Regulation Authority commissioner and nuclear fuel expert.

Massive amounts of contaminated water distract the plant and its workers from their primary task of reactor cooling and decommissioning preparation. Some of the water became contaminated because it was used to cool melted reactors, but some simply leaked into the wrecked plant, with portions escaping into the sea.

TEPCO will have to keep storing water for years, until the plant can create an air-cooling system for the ruined reactors or remove molten fuel out of them, and develop advanced units that can remove radioactive material from water and make it safe enough to release.

TEPCO hopes to limit the amount of water it must store and treat. It plans to pump away ground water before it reaches the reactor area, then release it untainted into the sea. But tank problems threaten those plans because the pump-out wells are downstream from the containers; leaks would contaminate the water before it could be diverted.

The plant's still-high radiation levels, particularly around the reactors and in tank areas, play a role in the quality of tank construction. Crews must work quickly to avoid prolonged exposure, and nuclear-plant veterans usually face radiation only to conduct highly skilled work, so jobs such as tank assembly typically go to contract workers who often come from low-tier subcontractors.

A worker who has been at the plant since the early days of the crisis said many senior workers have quit after their exposures have reached limits, and others are seeking better-paying jobs outside the plant. He spoke on condition of anonymity because he feared his employer could punish him for talking to a reporter.

In October 2012, Uechi was told to climb to the top of the 10-meter-high (30-foot-high) tanks and replace temporary covers for hose-insertion openings with disc-shaped steel covers, each the size of a dinner plate. He found that the temporary covers were nothing but masking tape that a worker could have easily stepped through.

Tales of slapdash construction are not limited to workers. A nuclear regulator, Shinji Kinjo, said water-tightness tests were sometimes held in the rain when there was no way of telling the leak from the rainwater.

The August leak led TEPCO to reveal that it had an earlier tank-yard foundation problem: The tank that leaked had been relocated two years earlier, after the ground underneath it collapsed during a water-tightness test. The company has since taken down two other tanks that were near the collapse area.

In October, when radioactive water overflowed from another tank, TEPCO said that vessel and four others connected to each other were built on a slope slightly tilting to the ocean. The tank that leaked was built without a water gauge and alarm that could have alerted workers.

The company has said that other tanks exceed its self-imposed 1-degree tilt limit. It also said the tanks are not anchored to the ground, but sit on a 20-centimeter-thick (8-inch-thick) layer of cement on top of a wire-mesh panel.

Tetsuro Tsusui, a former industrial plant engineer and a member of a civil group of scientists, said TEPCO's foundation work is insufficient. He said building tanks on slopes is "unthinkable," and that the flaws suggest "a systematic problem of quality and safety control."

Taisei Corp., Japan's leading construction company and one of the primary tank builders, declined to comment.

The maker of the tanks, TKK Co. said tank assembly is "like making a plastic model" and determines the vessels' quality. It said TKK tanks are "a temporary, emergency step to prevent crisis."

TEPCO ultimately needs to rely on tanks that can last up to 40 years, said Kobayashi, the company official. "The current situation may be the toughest, transitional phase," he said.