The South Korean nuclear regulator said Friday it renewed the operating license of the country's second-oldest nuclear power plant until 2022, overriding the objections of residents and anti-nuclear groups. The Nuclear Safety and Security Commission said that seven of nine... 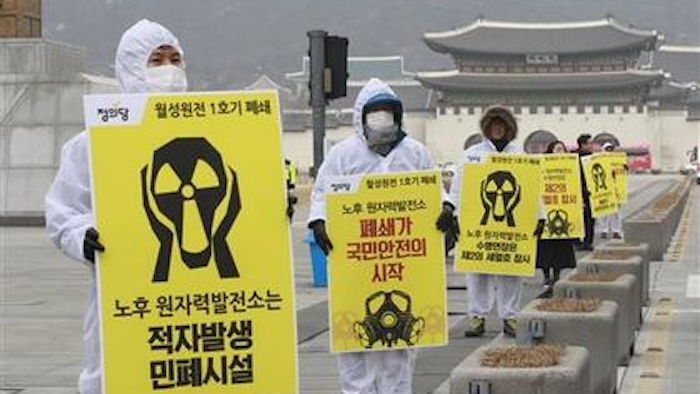 The South Korean nuclear regulator said Friday it renewed the operating license of the country's second-oldest nuclear power plant until 2022, overriding the objections of residents and anti-nuclear groups.

The Nuclear Safety and Security Commission said that seven of nine commissioners voted to restart the Wolsong No. 1 reactor located in Gyeongju city, 275 kilometers (170 miles) south of Seoul.

It was the first such decision in South Korea since safety concerns about nuclear energy and older plants were raised following the meltdowns at Japan's Fukushima Daiichi reactors in 2011. South Korea's 23 nuclear power plants mostly located in the country's southeastern coast provide about one-third of its electricity.

The nuclear regulator said in a statement that it reviewed the plant's ability to withstand natural disasters and its compliance with other legal standards. Two commissioners who asked for more time to review the reactor's safety abstained from the vote at the end of the 14-hour meeting that began Thursday morning and ended past midnight Friday.

South Koreans were sharply divided over the fate of the Wolsong No. 1 plant that had operated for 30 years until its license expired in 2012. Residents of Gyeongju and members of environmental groups staged protests near the nuclear watchdog's office when the commissioners discussed the restart in three meetings since January.

The decision to restart Wolsong No. 1 could galvanize opponents and residents living in the areas of current and future plants, said Suh Kune-yull, nuclear engineering professor at Seoul National University.

"I think there could be a backlash to the nuclear energy industry," Suh said. "It will become increasingly difficult to extend the lifespan of other nuclear plants or to build new ones."

The fate of South Korea's oldest nuclear plant, Kori No. 1, could be reviewed in the next year as the nuclear plant operator must decide by the end of 2015 whether to seek renewal of its operating license. South Korea's government is also seeking to build more nuclear power plants.

Opponents of the Wolsong restart said the plant failed to meet the latest safety standards that came into effect after the reactor first went into operation, and that residents near the power plant want it shut down. Supporters said the safety concerns were overblown and that South Korea, which imports oil and gas, needs the cheap energy source.