Getting Caffeine Fix As Easy As Taking Deep Breath

Move over, coffee and Red Bull. A Harvard professor thinks the next big thing will be people inhaling their caffeine from a lipstick-sized tube. 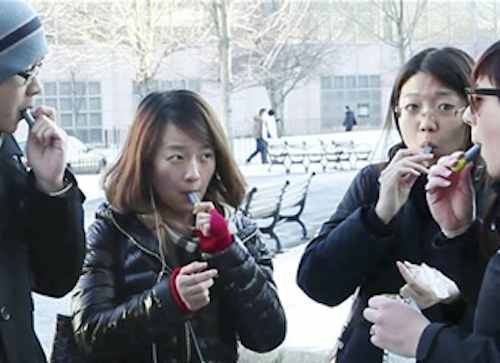 CAMBRIDGE, Mass. (AP) — Move over, coffee and Red Bull. A Harvard professor thinks the next big thing will be people inhaling their caffeine from a lipstick-sized tube. Critics say the novel product is not without its risks.

The product, called AeroShot, went on the market late last month in Massachusetts and New York, and is also available in France. A single unit costs $2.99 at convenience, mom-and-pop, liquor and online stores.

Biomedical engineering professor David Edwards said AeroShot is safe and does not contain common additives, like taurine, used to amplify the caffeine effect in common energy drinks. Each grey-and-yellow plastic canister contains 100 milligrams of caffeine powder, about the amount in a large cup of coffee, plus B vitamins.

But Democratic U.S. Sen. Charles Schumer of New York wants the U.S. Food and Drug Administration to review AeroShot, saying he fears it will be used as a club drug so that young people can drink until they drop. Schumer's national press secretary did not immediately respond to calls for comment.

FDA spokeswoman Siobhan DeLancey declined to comment, saying the agency will respond directly to Schumer on the matter.

Edwards said Schumer's comments are understandable in the context of developments over the last few years, when students looking for a quick and cheap buzz began consuming caffeine-packed alcoholic drinks they dubbed "blackout in a can" because of their potency. But he said AeroShot is not targeting anyone under 18 and it safely delivers caffeine into the mouth, just like coffee.

"Even with coffee — if you look at the reaction in Europe to coffee when it first appeared — there was quite a bit of hysteria," he said. "So anything new, there's always some knee-jerk reaction that makes us believe 'Well, maybe it's not safe.'"

Once a user shoots a puff of calorie-free AeroShot into his or her mouth, the lemon-lime powder begins dissolving almost instantly. Each single-use container has up to six puffs.

"The act of putting it in your mouth is the act of breathing — so it's sort of surprising and often people the first time they take the AeroShot, they laugh ... that it's kind of a funny way of putting food in your mouth," said Edwards, who also came up with a breathable chocolate product a few years back.

Dr. Lisa Ganjhu, a gastroenterologist and internal medicine doctor at New York-based St. Luke's-Roosevelt Hospital, said people need to be aware of how much caffeine they are ingesting.

"You want those 10 cups of coffee, it will probably take you a couple hours to get through all that coffee with all that volume that you are drinking," Ganjhu said. "With these inhale caffeine canisters you can get that in 10 of those little canisters — so you just puff away and you could be getting all of that within the hour."

Even the product packaging warns people not to consume more than three AeroShots per day.

"This tastes really good and I think it rocks," student Zack Huang said after puffing onto a free sample before rushing to join a group of friends who were walking away from campus.

Still, one student was not happy with the taste, echoing sentiment expressed online by some consumers.

People elsewhere vowed they would never give up their morning coffee.

"I want to brew it, I want to stir it and I want to drink it slowly as I absorb the caffeine," said longtime coffee fan Mark Alexander.

The makers of AeroShot appear to be aware of that sentiment, declaring that the product isn't about switching away from coffee, but rather making it easier for people with active lifestyles to get their caffeine fix.

"AeroShot can be used in a variety of settings inconvenient for liquids, such as when you study in the library, board an airplane or get into the car for a long drive," they say in the section dedicated to frequently asked questions on their website. "It's easy to take AeroShot with you when you go biking, skiing, curling, or any other activity that consumes energy."

AeroShot, manufactured in France and the flagship product of Cambridge-based Breathable Foods Inc., is the product of a conversation that Edwards had with celebrity French chef Thierry Marks over lunch in the summer of 2007.

"We were discussing what interesting culinary art experiments we might do together and I had the idea that we might breathe foods since I've done a lot of work over the last 10 or 15 years on medical aerosols," Edwards said.

The first venture Edwards worked on with Harvard students was the breathable chocolate, called Le Whif. Now he's preparing to promote a product called Le Whaf, which involves putting food and drinks in futuristic-looking glass bowls and turning them into low-calorie clouds of flavor.