Jaguar Land Rover is accusing a Chinese automaker of copying its cars. At issue is the Chinese LandWind,  which appears to be a rip-off of the Land Rover Evoque SUV design. 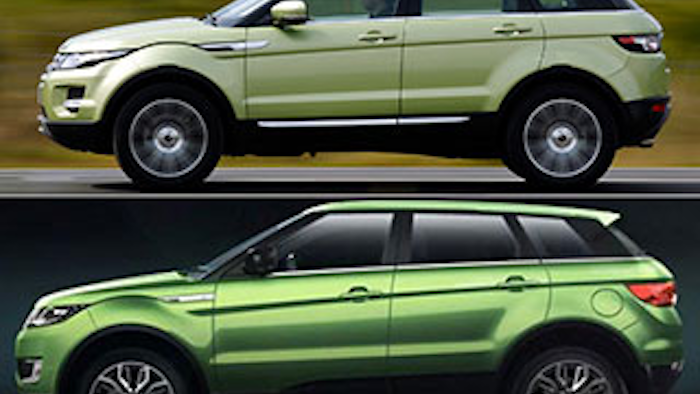 Jaguar Land Rover is accusing a Chinese automaker of copying its cars. At issue is the Chinese LandWind,  which appears to be a rip-off of the Land Rover Evoque SUV design.

Just yesterday The Associated Press reported that a U.S. business group in China is urging the country to be more transparent and fair to instill confidence in companies doing business there. According to the report:

The American Chamber of Commerce in China said in its annual white paper that its members wanted to see the government apply the rule of law and more fairly enforce business regulations. The report also called for better enforcement of intellectual property rights and greater access to the Chinese economy for foreign companies.

Over the past year, foreign companies operating in China have faced challenges ranging from anti-monopoly investigations to proposed rules requiring foreign tech companies to hand over proprietary software source codes.

Right now Jaguar Land Rover is trying to push sales in China and has even constructed a $1.8 billion factory to build enough of its Range Rover Evoque crossover for the country. So, it’s no surprise that the company wouldn’t be exactly happy to see a Chinese car company LandWind unveil an Evoque copy called the X7 at last year’s Guangzhou Auto Show and again at this year’s Shanghai Auto show. LandWind is a joint venture company formed between Chinese companies Changan Auto and Jiangling Motors.

As reported by the Wall Street Journal last November, Jaguar Land Rover has vowed to take action against LandWind.

At a press conference, Jaguar Land Rover CEO Ralph Speth said, "I really regret that all of a sudden copy-paste is coming up again. That will not help the reputation of China, of Chinese industry at all."

“There are no laws to protect us, so we have to take it as it is," Speth told reporters. "In Europe, we can be protected against this kind of copy-paste in the design language, in the features but also the technology."

Here’s more about the controversy from Bloomberg Business:

Should China be held accountable for not protecting foreign companies doing business in China? Or is it just the risk companies take doing business there? Tell us what you think by leaving your comments below.