Manufacturers Are Leaving China, But Where Are They Headed?

Seeing China’s manufacturing sector shrink is a trend that excites Americans, although it may not actually alleviate much of the pressure around a U.S. unemployment rate of 7.3 percent.  The reality, according to many experts, is that the phenomenon is more one of nearshoring than reshoring, as many of these businesses – along with their jobs – head to Mexico. 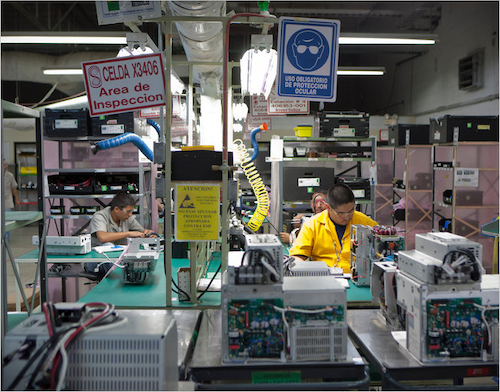 Seeing China’s manufacturing sector shrink is a trend that excites Americans, although it may not actually alleviate much of the pressure around a U.S. unemployment rate of 7.3 percent. The reality, according to many experts, is that the phenomenon is more one of nearshoring than reshoring, as many of these businesses — along with their jobs — head to Mexico.

The competitiveness of offshoring has been declining for years, as China has faced increasing wages and currency costs, as well as higher fuel and transportation costs. There are also many hidden costs and risks that are difficult to anticipate. According to Jason King, Vice President of global business firm AlixPartners, “companies are waking up to the harsh reality that manufacturing offshore in places like China and other low-cost countries is costlier than it initially looked.”

Unlike China, Mexico continues to boast low labor costs and has a huge advantage in terms of proximity to the American market. That said, finding out how many American companies are manufacturing in Mexico is surprisingly difficult. According to Mario Vidana, Senior Trade Specialist with the U.S. Department of Commerce, there are no public directories for Foreign Direct Investment (FDI) companies established in Mexico. In order to obtain this information, you would need to contact the chamber of commerce or industry chamber in each state. Vidana also warned that they are often reluctant to share this information.

So while the exact number of U.S. companies that are relocating their factories to Mexico is unknown, it does appear that the trend is especially apparent in the automotive, aerospace, and textile industries. In an interview with Entrada Group, King points to several key benefits of producing in Mexico compared to China. These benefits include lower transportation and warehousing costs, an improved ability to respond to customer demands, a better control of intellectual property, the ease of proximate time zones between management and production, and the cultural similarities between the U.S. and Mexican markets.

Paula Ramos, Marketing Director at MFI International, echoes many of these advantages, the greatest being the proximity to American markets. MFI International provides manufacturing services in the Juarez, Mexico region that ease collaboration between U.S. companies and Mexican manufacturers. She specifically cites the benefits of working in the border region of Mexico, where there are concentrations of skilled workers and industry.

“You get the benefits from the lower labor rates in Mexico, and you can have your products within the same day. We have cases where we can place an order in the morning and the product comes back to an El Paso facility that afternoon,” Ramos says. “It’s almost like being in the U.S.”

To Ramos, this quick turnaround is what defines nearshoring. “I talk to companies that say ‘nearshoring’ and then mention factories in Columbia and Central America — that’s still far.”

According to Ramos, manufacturing in Mexico is being developed in “clusters” which are often incentivized by the Mexican government. The skilled workforce is available throughout Mexico, and different cities are working to attract different types of investments. Nissan, for example, recently opened a plant in Aguascalientes, which will attract suppliers and OEMs to that region. There are a large number of automotive and aerospace companies moving south, which is building up new clusters, she says.

The Mexican government is incentivizing manufacturing on Mexican soil by making wise investments, according to Ramos. The government is primarily financing improvements to national infrastructure and roads to ease the flow of trade. They have also worked for years on building trade agreements globally, and now hold agreements with 44 countries that allow duty-free trade, she says.

The government has also invested in the education of its people, turning out a prepared, bilingual workforce. According to the United States Embassy in Mexico, more Mexicans — almost 100,000 more — earn engineering degrees annually than Canadians and Germans. These skills are attractive to U.S. companies, especially for a lower price tag than at home.

While the Mexican government has made some smart investments, not all of their recent decisions are going over well with manufacturers. On November 1, Mexico’s congress passed a tax reform measure that will make changes to customs practices and raise the value-added tax (VAT) on export assembly plants in the border regions.

Ramos says that MFI is waiting until the end of the year to see what the final resolution is before making a formal statement, but compares the contentious proposal to health care reform in America.

Currently, a major benefit of producing in Mexico versus in China is avoiding a high VAT. As the system stands now, companies import materials duty free, transform those materials into a product in Mexico, and export the finished product back to the U.S. with zero, or very few, duties. The new VAT would change the way taxes are calculated, and the manufacturing (Maquiladora) industry is lobbying very hard against it.

Another concern that has deterred some companies from manufacturing in Mexico is the ongoing, publicized, drug related violence. Ramos said that this fear is not particularly relevant to manufacturers because of the nature and location of the violence. In Mexico, most manufacturing is done in industrial parks that are gated and secured. “Most manufacturers, like MFI, will arrange transportation for workers from their living areas to and from their workplace,” she says.

What Does This Mean For American Manufacturing?

“I strongly believe North American companies should take advantage of nearshoring labor-intensive operations by establishing production sharing between the U.S., Canada, and Mexico, and boosting economic activity within the region,” she says.

And for Ramos, this is the best part of her job.

“It feels very good, when you start talking to a company and explaining all of the benefits [of producing in Mexico], and then you walk out on the production floor and you see us hiring more and more workers,” she says proudly.

“It’s really about keeping the workers happy, and if you’re doing that by helping companies save some money and become more competitive, that’s a great match.”

Next week, we will follow-up this article by talking with Wilson Lee, Director of Product Manufacturing for Newark element14. Newark element14 is a global electronics distributor that has begun reshoring some of their operations, and will provide some context to the “new normal” of manufacturing for OEMs, and what the U.S. can do to incentivize more reshoring efforts. To view the follow-up article, click here.

If you have comments or questions about this article, or would like to be featured in an upcoming article, please contact me at tia.nowack@advantagemedia.com or on Twitter at @TalesFromTia.