The tide has begun to turn on the flow of manufacturing jobs from the U.S. to China and other low-cost countries, according to a new study. 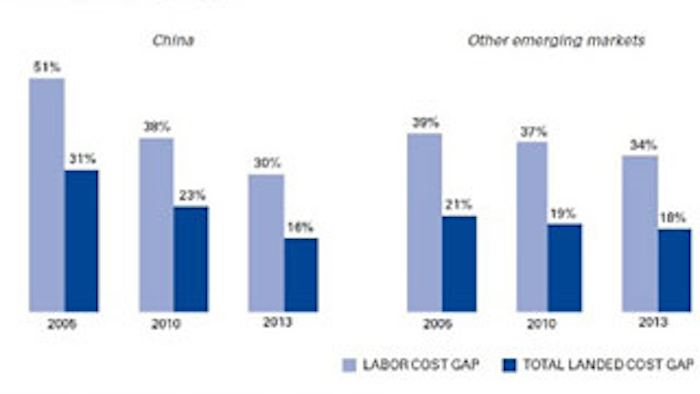 The tide has begun to turn on the flow of manufacturing jobs from the U.S. to China and other low-cost countries, according to a new study from The Hackett Group, Inc. Some companies are already reshoring a portion of their manufacturing capacity, and this trend is expected to reach a crucial tipping point over the next two to three years, as the total landed cost gap between the two nations continues to shrink, driven in part by rising wage inflation in China and continued productivity improvements in the U.S.

At the moment, China remains a manufacturing powerhouse, with nearly 75 percent of the companies surveyed having some manufacturing capability in China for at least three years,  either directly or through contract manufacturers. The Hackett Group estimates that Chinese manufactured exports to the U.S. currently support between 15 and 20 million jobs in China.

The Hackett Group's study offered significant hope for the U.S. jobs market. The study found that companies are exploring reshoring as an option for nearly 20 percent of their offshore manufacturing capacity between 2012 and 2014. This repatriated capacity could roughly offset the jobs that will otherwise move offshore, indicating that the great migration of manufacturing offshore over the past several decades is stabilizing.

Reshoring is expected to become more viable with each passing year, as the total landed cost gap of manufacturing offshore shrinks. The Hackett Group's research found that the cost gap between the U.S. and China has shrunk by nearly 50 percent over the past eight years, and is expected to stand at just 16 percent by 2013. This trend is largely driven by rising labor costs in China, as well as rising fuel prices globally, which affects shipping costs.

"This is good news for the American worker as growth in the U.S. manufacturing sector keeps more high-paying jobs at home," said David P. Sievers, Principal, Strategy and Operations Leader for The Hackett Group.

The research found that the shrinking total landed cost gap could create a tipping point resulting in an acceleration of reshoring. "As the total landed cost gap falls below 15 percent, the economic opportunity will require more companies to rebalance their supply chains and move capacity back closer to customers in the U.S.," continued Mr. Sievers.

According to published reports, many large companies have made public plans to reshore portions of their manufacturing to the U.S. over the past two years, including Caterpillar, Nissan, NCR, Yamaha, Ford, and Electrolux. Earlier this year, both Boeing and GE said they were committed to moving parts of their offshore manufacturing capabilities back to the U.S.

Another significant finding from The Hackett Group study is the increased movement of lower-value manufacturing from China to other developing economies as companies under margin pressure search for lower wage rates outside of China.  Countries including India, Thailand, Vietnam, and Brazil continue to successfully grow their share of global manufacturing as they become more cost effective countries for manufacturing. "The cost increases in China are impossible for companies to ignore," said The Hackett Group Chief Research Officer Michel Janssen. "As Chinese wage rates rise, companies are looking to maintain their competitive edge by either bringing that production closer to developed markets, moving it to lower wage countries, or increasing productivity in China."

The research described here is available, with complimentary registration, at: http://www.thehackettgroup.com/research/2012/reshoring-global-manufactur...