Power from the offshore wind would be connected to the electrical grid. 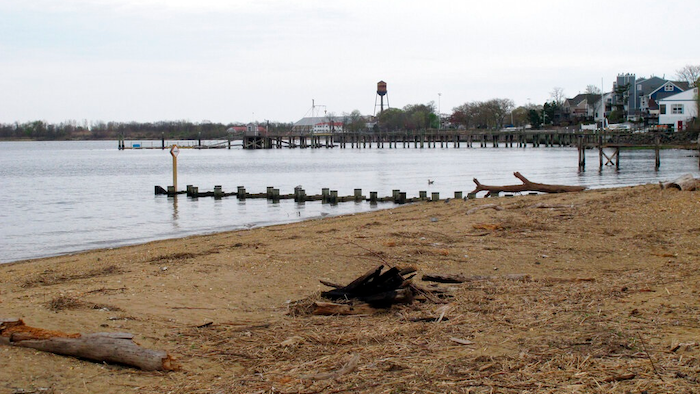 This Tuesday, April 19, 2021 photo shows the waterfront of Raritan Bay in Keyport, N.J. A Massachusetts company wants to build a high-voltage power line that would come ashore in Keyport and connect electricity from a future wind farm off the New Jersey coast to the onshore electrical grid.
AP Photo/Wayne Parry

KEYPORT, N.J. (AP) — A Massachusetts company plans to build a high-voltage line to bring electricity from a future New Jersey offshore wind farm onto land, and connect it to the power grid.

Anbaric, of Wakefield, Massachusetts, has already obtained several permits from New Jersey environmental regulators for what it calls its Boardwalk Power Link project.

It is a 1,200 megawatt transmission line that would connect to an as-yet unspecified wind farm off the New Jersey coast. The line would come ashore in Keyport, in northern Monmouth County on the Raritan Bay, and would run underground along highways for nearly 21 miles (33 kilometers) into Middlesex County where it would connect to a new substation.

That substation would be located next to an existing high-capacity power plant in South Brunswick, where power from the offshore wind would be connected to the electrical grid.

“As offshore wind began to progress in New Jersey, it became extremely clear that there were going to be opportunities to bring all this energy onshore,” said Janice Fuller, the company's mid-Atlantic president.

It would not connect to the state's first offshore wind development, Ocean Wind, a 98-turbine wind farm planned for an area off Atlantic City.

Rather, it will be available for other wind farms, which are considered highly likely to be built in New Jersey, which has set ambitious goals for wind power development.

Gov. Phil Murphy has committed New Jersey to developing at least 7,500 megawatts of wind energy by 2035, enough to power more than 3.2 million homes.

Fuller said the company has obtained a general permit from the New Jersey Department of Environmental Protection, and has made significant progress in applying for other permits from state and federal regulators.

It could take five years to construct and connect the line to a wind farm and the new substation, she said.

The project has its roots in a proposal dating back to the early 2000s in which the company would have built a line to send power from the Deans substation in South Brunswick to Long Island, New York.

It never got built, but Anbaric held onto the resources for the project, including land acquisitions or the option to buy needed land.

The Boardwalk Power Link project would disturb less than half an acre of wetlands, she added.

The Ocean Wind project off Atlantic City, to be built by Danish wind energy company Orsted and New Jersey's PSEG, would connect to the grid at former power plants in Upper Township, Cape May County, and Lacey Township, Ocean County.

Lines would come ashore in Ocean City for the southern route, connecting to the former B.L. England power plant, and in Lacey Township or Ocean Township, known locally as Waretown, to connect at the former Oyster Creek nuclear power plant site.

Infrastructure Plan: $33M to Clean Up Hundreds of Oil Wells