It's another setback for a project that's been debated nearly two decades. 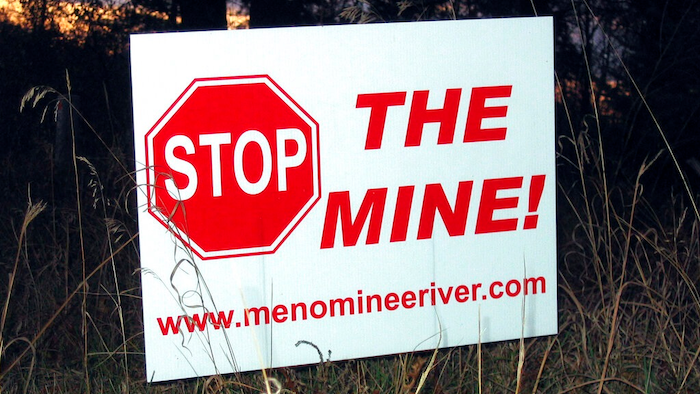 This Oct. 20, 2008 file photo shows, one of many signs that have popped up in yards, on trees and along roads in the Lake Township, Mich., section of Menominee County, where the proposed Aquila Resources Inc. mine would be located. Administrative Law Judge Daniel Pulter has overruled state regulators who granted a permit required for construction of the open-pit mine in the Upper Peninsula, in a decision released Monday. Jan. 4, 2021, creating another delay for a project that has been debated for nearly two decades.
AP Photo/John Flesher, File

TRAVERSE CITY, Mich. (AP) — A Michigan judge has overruled state regulators who approved a key permit for a proposed open-pit mine in the Upper Peninsula, another delay for a project that has been debated for nearly two decades.

Administrative Law Judge Daniel Pulter invalidated a wetlands permit granted in 2018 to Aquila Resources Inc. The Toronto-based company's Back Forty mine primarily would target gold and zinc in an underground sulfide deposit, as well as smaller volumes of copper, silver and lead.

In another twist, the state agency that sided with Aquila two years ago said Tuesday that it agreed with the judge's ruling.

Aquila's application provided too little information on potential damage to wetlands near the river, which runs along the Michigan-Wisconsin line, Pulter said in a decision released Monday. It also failed to show there were no feasible alternative locations for the mine, he said.

“Obviously, we are disappointed by the judge's decision," company President Barry Hildred said Tuesday. "Having reviewed the decision, we believe that Aquila will be able to resolve the cited issues and remain confident that Back Forty will be a safe, disciplined operation that promotes and supports local community socioeconomic development and is protective of the environment.”

Environmental groups and the Menominee Indian Tribe of Wisconsin contend the mine would lower the groundwater table, harm wetlands and expose the river to acidic runoff that can form when sulfide minerals are exposed to air and water.

Pulter's ruling confirms the threat to the environment, human health and Menominee cultural sites, said Joan Delabreau, chairwoman of the tribe, which considers the river a sacred site and its place of origin.

“We will not stop fighting until these waters, lands, and sacred sites are protected for good,” Delabreau said.

Aquila has obtained most of the permits needed to mine the underground ore deposit discovered in 2001.

The wetlands permit was the subject of multi-year negotiations between the company, state regulators and the U.S. Environmental Protection Agency, which said in 2018 that some of its concerns had been satisfied.

Soon thereafter, the Michigan department issued the permit but said Aquila would have to take further steps, including the development of an improved plan for monitoring groundwater and wetlands and preventing contamination.

In his ruling Monday, Pulter noted that the decision ran counter to recommendations of the department's Water Resources Division.

Staffers had questioned the accuracy of an Aquila modeling system designed to measure potential damage to wetlands and how many acres could be affected, Pulter said. They also raised pollution concerns and believed there were other suitable mining locations.

The experts received no evidence that all requirements for issuing the permit had been met, the judge said. Yet department higher-ups followed the EPA's recommendation to grant the permit and order the company to provide more details later.

Such a “conditional permit” is not authorized under the state's water protection laws, he said.

“What happens if the after-the-fact information provided by Aquila is inadequate for the issuance of a permit?" Pulter asked. “Is the permit revoked?"

If that were to happen, there would be no legal basis for the company to challenge the decision, he added.

McDiarmid said Whitmer's administration agrees that when applicants show they have met legal obligations, permits should be issued “in a timely manner." But if they fall short, they should expect denial, he said.

Aquila said the ruling “establishes a permitting approach that markedly departs from wetland permits issued for other mining projects in the Great Lakes region.” Lengthy negotiations with the department had produced a method of estimating wetlands impacts that met federal guidelines, the company said.

Aquila has several options, including appealing to a department permit review panel, suing in state court or submitting a new application.

Dale Burie, president of an opposition group called SAVE the Menominee River, said he expects Aquila to keep pushing for the project.

“This is a triumph for us, but it's not over yet,” Burie said.