The cost will be so great that authorities did not even try to estimate it. 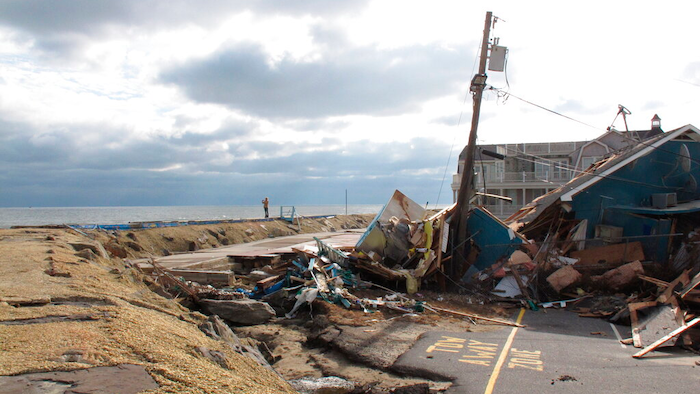 Remnants of an oceanfront building in Sea Bright N.J. that was destroyed by Superstorm Sandy.
Associated Press

ATLANTIC CITY,N.J. (AP) — Gasoline-powered vehicles would become a thing of the past, and nine out of every 10 buildings in New Jersey would be heated and cooled by electricity instead of natural gas or oil, under an ambitious plan laid out Thursday by the state's environmental regulators.

It is an effort so far-reaching and transformative of the way everyday life is lived in the state that its cost is sure to be great — so great that authorities did not even try to estimate it.

Officials with the state Department of Environmental Protection released a report Thursday outlining the state's progress in meeting goals to reduce the emission of planet-warming greenhouse gases.

Shawn LaTourette, the DEP's deputy commissioner and chief of staff, predicted the plan would be attacked from the left and the right.

“You'll hear about cost: ‘Too fast, too soon, too much, slow down,’” he said. “Cost is a significant component in rule-making. The cost to consumer is incredibly important.”

But he said their mandate was not to put a price tag on specific measures, saying that would be part of legislation or the issuance of regulations by state agencies.

“We obviously have our concerns because the report does not address costs or reliability impacts,” said Ray Cantor, vice president of government affairs for the New Jersey Business and Industry Association, “We’re hopeful those issues will be addressed as laws and regulations are considered."

Thursday's report has its roots in a 2007 state law, the Global Warming Response Act, that required New Jersey to try to reduce its greenhouse gas emissions by 20% from 2006 levels by the year 2020. That has been accomplished, largely through market forces that have powered a shift toward natural gas and away from coal-fired or oil-driven power generation, authorities said.

The second half of the law is much more daunting. It set a goal of reducing those emissions by 80% by the year 2050 — that goal was the subject of most of Thursday's report.

Currently, gasoline-fueled vehicles account for over 70% of New Jersey's transportation sector’s emissions. The report envisions 88% of new light-duty vehicle sales — passenger cars, SUVs and light-duty trucks — will need to be electric or hydrogen-powered by 2030, rising to 100% by 2035 in order for the state to meet its goals.

Likewise, 90% of buildings would need to have their heating and cooling source switched to electric to meet the goals. Power plants would also need to be converted from coal, gas or oil to renewable energy sources, the report said.

The DEP officials acknowledged that burning natural gas will continue to be an important source of energy as the transition is made to cleaner sources.

They called for a statewide network of electric car-charging stations.

The officials said much of the difficult and costly decisions will need to be made as laws are passed and regulations issued by state agencies. They called for the state leading the way in some sectors, like converting its vehicle fleet to all electric or hydrogen vehicles as an example to show it can be done.

Jeff Tittel, director of the New Jersey Sierra Club, praised parts of the report, including the call for all-electric vehicles. But he said it “doesn't show the sense of urgency we need” in making the transition away from fossil fuel use.

“When we first started working on the Global Warming Response Act 15 years ago, we thought we had more time,” he said. “The scientists were wrong. The things we thought were going to happen in 2050 are happening today. Climate change and its impacts are accelerating at a greater rate than scientists thought. Time is running out, and we need to take bolder initiatives.”