Two key players in the Republican and Democratic parties in Nevada are teaming up to host a clean-energy talk as the White House abandons a worldwide agreement to curb climate change and states are moving to the forefront of the fight. 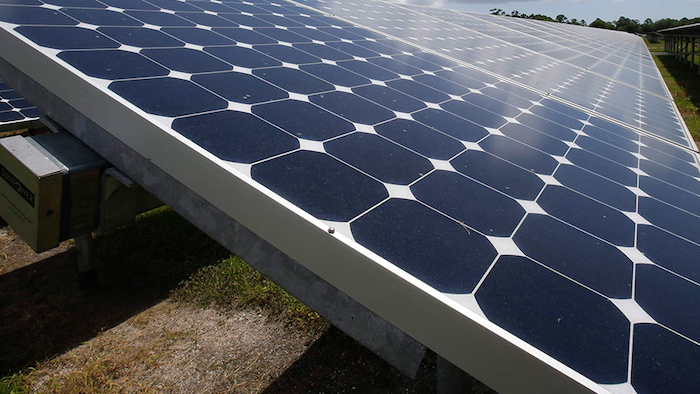 CARSON CITY, Nev. (AP) — Two key players in the Republican and Democratic parties in Nevada are teaming up to host a clean-energy talk as the White House abandons a worldwide agreement to curb climate change and states are moving to the forefront of the fight.

Former Democratic Senate Majority Leader Harry Reid said Wednesday that he's bringing back a summit last headlined by President Barack Obama in 2015. This time, the co-host is a Republican — Gov. Brian Sandoval — a bipartisan move as Congress remains gridlocked on health care and other issues.

However, Sandoval is no newcomer to clean energy efforts or breaking with his own party. He ushered in a world-renowned rechargeable battery factory and supported expanded access to solar, wind and geothermal energy throughout his six years in the governor's office.

"I'm proud that Nevada is a leader in the clean energy conversation," said Sandoval, who has resisted Republican-led efforts to undo Obama's health care law and was the first GOP governor to expand Medicaid.

"The state has a history of collaboration and thoughtful discourse, which results in effective policy-making, and the summit will provide a platform for energy leaders to come together to discuss new ideas and share best practices," he said.

The bipartisan climate effort comes as the Trump administration is pushing coal and leaving the Paris climate agreement to reduce greenhouse gas emissions. States and cities have stepped in with their own plans to keep the U.S. on track, though Sandoval has not pledged to uphold the accord as other GOP governors have.

"I asked Sandoval to help because this is an age of such terrible partisanship — I wanted to make sure there was an umbrella of nonpartisanship, and he's been terrific on this," Reid said in a telephone interview. "So, yeah, it took me a while to make sure I wanted to do this."

The pair will ask innovators, public officials and advocates to discuss at the summit how to motivate Americans to choose energy-efficient technologies.

Reid said it is time to focus on getting that technology into consumers' hands, especially with the expansion of the products' availability and the growth in wind and solar energy capacity.

Brown plans to host a global climate summit and said last week that President Donald Trump does not speak for the nation on climate change consciousness.

Despite his environmental efforts, Sandoval has not joined an alliance of about a dozen states committed to upholding the accord, though Republican governors in Vermont and Massachusetts have.

The governor has pushed for renewable energy that cuts down on climate-changing greenhouse gases. The governor signed a law last month that restored solar energy credits that officials said would make solar panels an affordable option for homeowners and make the state a leader in clean energy production.

The Tesla Gigafactory that Sandoval helped lure to Nevada began churning out rechargeable batteries outside Reno this year for their electric car lineup and household-energy storage units.

But another electric car startup backed by the governor, Faraday Future, said this week that was abandoning plans to build a $1 billion manufacturing plant outside Las Vegas.