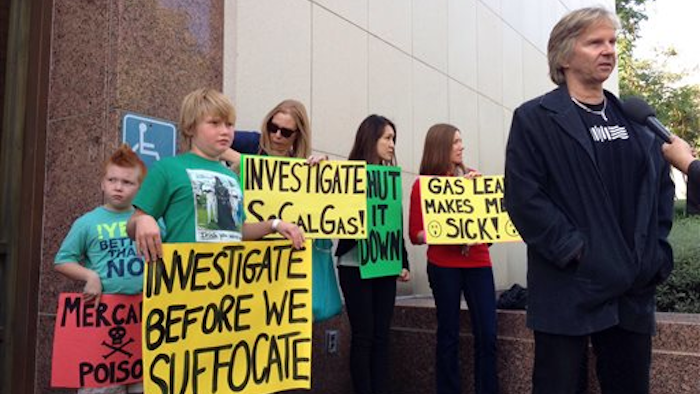 LOS ANGELES (AP) — A utility trying to stop a monthlong leak at a massive natural gas storage facility near a Los Angeles neighborhood said it planned to use a mist to mask the sickening stench as work continues — possibly for three more months — to plug the well.

Porter Ranch residents attended the supervisors meeting to criticize the company's delay in owning up to the leak that began Oct. 23 and said they are wary of claims the deodorizing mist is harmless and fear it could cause unknown chemical reactions.

"We're not your guinea pigs," said Matt Pakucko, president of a group called Save Porter Ranch.

So far, the leak has stumped the gas company, a division of Sempra Energy, which has tried unsuccessfully to pour liquid into a leaking well that goes a mile and a half underground.

Plans were underway to drill a relief well that could take three more months to complete.

The company has 115 wells at the site that pump natural gas into a vacant, underground oil field when demand is low and draw it out for use by customers and power plants when demand spikes. It is believed to be the largest natural gas storage facility in the West and is capable of supplying all of Southern California for more than a month.

The company and public officials said the field is not at risk of exploding and the natural gas, which is mostly methane, is dispersing and does not pose any health problems.

Still, residents have complained of being uneasy and queasy since they smelled the leak.

Public health officials said the wide-ranging symptoms are caused by a chemical added to odorless natural gas so it can be detected, but there are no long-term risks from exposure.

The company plans to use Odex, a biodegradable solution made from food-grade products, to mask the smell.

Cameron Michaels, 11, a fifth-grader from Porter Ranch, told the board he wakes with a bloody nose and his school reeks of the odor from the leak, which prevents them from going outside.

"Now I'm told it's going to be 90 days. It's not OK," Michaels said. "This make-it-up-as-you-go response is totally unacceptable."

The gas company is "deeply sorry" for the smell, inconvenience and frustration residents feel, said Gillian Wright, a vice president with the utility.

After the Los Angeles County Health Department told the company to offer free relocation during the work, SoCalGas has relocated more than 60 families and is handling requests from 250 others.

State air officials estimated that in four weeks the leak had spewed the equivalent of a quarter of the methane — a potent greenhouse gas emission — that the state produced all month.

Supervisors sought some reassurance that the gas company is doing everything to plug the leak.

"It seems as though there's expertise at the gas company, but it doesn't seem like it's working," said Supervisor Sheila Kuehl. "It does give us less confidence in the technology."