The federal Nuclear Regulatory Commission, despite objections voiced by state officials, is giving positive reviews to the decommissioning plans developed by the owner of the closed Vermont Yankee nuclear plant. 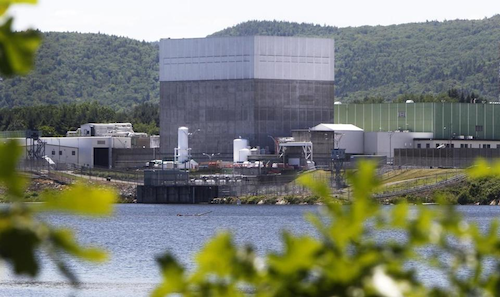 The Vermont Yankee Nuclear Power Station sits along the banks of the Connecticut River in Vernon, Vt. (AP Photo)

MONTPELIER, Vt. (AP) — The federal Nuclear Regulatory Commission, despite objections voiced by state officials, is giving positive reviews to the decommissioning plans developed by the owner of the closed Vermont Yankee nuclear plant.

"We do not have any concerns or objections to the decommissioning road map that Entergy has developed," NRC spokesman Neil Sheehan said Thursday.

He made the comment shortly after the NRC made public a letter it had written to New Orleans-based Entergy Corp. that touched on several aspects of managing the Vernon reactor post-shutdown.

Vermont Yankee closed permanently 13 months ago after nearly 43 years of operation, with Entergy officials saying it was no longer economically viable in a New England energy market that had come to be dominated by generators using cheap natural gas.

Entergy plans to mothball the plant, likely until the second half of this century, before dismantling it in hopes the fund set aside for that work — recently valued at about $665 million — grows and plant components become less radioactive as the years pass.

Fights have erupted between the state and Entergy over management of the fund, with the state suing over the company's use of the fund to pay ongoing expenses including property taxes, and over the company's plan to cut funding for emergency planning in the plant's emergency evacuation zone. That zone extends 10 miles out from the plant, in Vermont's southeast corner, into neighboring communities in Vermont, Massachusetts and New Hampshire.

In the letter released Thursday, the NRC essentially said it did not find any problems with the plant's decommissioning activities. The company's estimates of the total cost of various aspects of decommissioning, $817 million in 2014 dollars, "are not unreasonable," the agency said.

The schedule Entergy set out for the various phases of decommissioning is "adequate to achieve VY license termination within 60 years of permanent cessation of operations," meaning the deadline for the work getting done would be in the mid-2070s.

Vermont Yankee spokesman Martin Cohn said plant officials were "proud" of the results they had gotten from the NRC.

"We met the NRC's requirements and provided all the information" the agency wanted, he said.

The commissioner of the state Department of Public Service, Christopher Recchia, said litigation over Entergy's plan to cut emergency funding and to use money from the decommissioning fund for ongoing operating expenses was pending.