Federal prosecutors rested their case Tuesday in the trial of an 83-year-old nun and two follow nuclear protesters accused of painting slogans and splattering human blood on a Tennessee weapons facility known as the "Fort Knox of uranium." 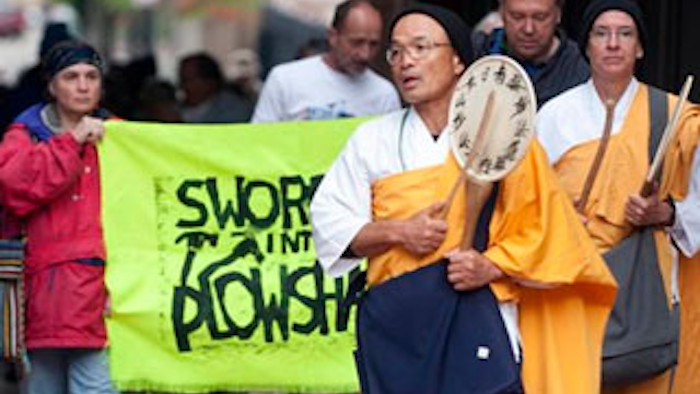 KNOXVILLE, Tenn. (AP) — Federal prosecutors rested their case Tuesday in the trial of an 83-year-old nun and two follow nuclear protesters accused of painting slogans and splattering human blood on a Tennessee weapons facility known as the "Fort Knox of uranium."

Prosecutors argued the act was a serious security breach that continues to disrupt operations at the Y-12 National Security Complex in Oak Ridge.

Attorneys for Sister Megan Rice and Michael Walli, both of Washington, D.C., and Greg Boertje-Obed of Duluth, Minn., said the events of July 2012 were a symbolic act, and that they could not have foreseen that their intrusion would cause the plant to shut down for two weeks as security forces were re-trained and contractors were replaced.

The defendants called themselves "Transform Now Plowshares," a reference to the biblical phrase: "They shall beat their swords into plowshares, and their spears into pruning hooks." They are part of a larger loose-knit group of protesters that have used high-profile demonstrations to draw attention to their nuclear disarmament goals and related causes around the country.

The trio cut through security fences, hung banners, strung crime-scene tape and hammered off a small chunk of the fortress-like Highly Enriched Uranium Materials Facility, or HEUMF, inside the most secure part of complex.

Federal officials have said there was never any danger of the protesters reaching materials that could be detonated on site or used to assemble a dirty bomb, a position stressed by defense attorneys in the case.

Francis Lloyd, Rice's attorney argued that "spraying of biblical graffiti" and other symbolic acts were not meant to cause any damage to the uranium stored in the building.

"What you're not going to hear is that what is kept in the HEUMF was touched or tampered with," he said.

Rice testified that she was surprised the group made it all the way to the interior of the secured zone without being challenged and that plant operations were suspended.

"That stunned me," she said. "I can't believe they shut down the whole place."

After dismissing the jury for the night, U.S. District Judge Amul Thapar heard an hour of arguments over a defense motion to dismiss a sabotage count that carries a maximum prison sentence of 20 years. The judge said he could rule by Wednesday.

"The proof is exactly the opposite," Quigley said. "The security at Y-12 is significantly better today than on the day they showed up."

The trial began with testimony from Steven C. Erhart, the National Nuclear Security Administration manager at the site, who said the break-in has hurt the international credibility of the weapons plant. But he also acknowledged under cross-examination that it exposed serious security flaws that have since been repaired and improved.

"It was an embarrassment from the Y-12 plant and the good people who work there," Erhart said, but it means "Y-12 has never been stronger."

Quigley read several critical findings from a Department of Energy inspector general's report following the break-in, including that the perceived security was unjustified and that a culture of complacency contributed to allowing the three elderly protesters to roam the facility for about two hours.

"I believe a better term would have been the normalization of a deviation from the optimum," he said, bringing chuckles from the overflow audience largely made up of supporters of the defendants.

All three defendants have long protested U.S. military policies. Walli, a Vietnam veteran, was arrested two years earlier for trespassing at Y-12 and sentenced to eight months in federal prison.

The protesters' actions were lauded by some members of Congress, who said the incursion called attention to flawed security at Y-12, first built as part of the Manhattan Project during World War II that provided enriched uranium for the atomic bomb dropped on Hiroshima, Japan.