More than two years after Japan's nuclear disaster, damaged vehicles, twisted metal and other debris remains strewn about the Fukushima plant. Scores of black and gray pipes and hoses cover the ground in some places, part of the company's makeshift system to pump water into the damaged reactors to keep them from overheating. 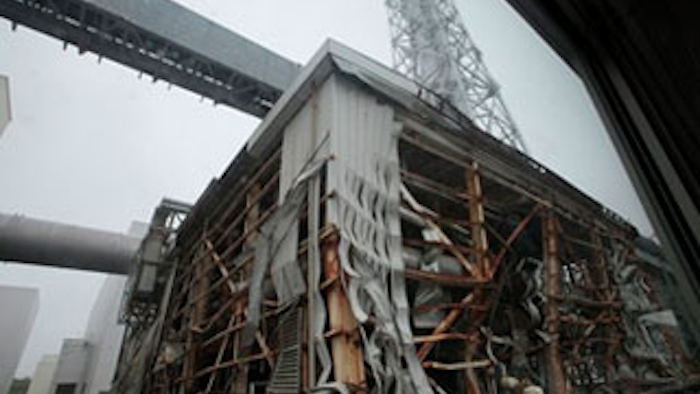 OKUMA, Japan (AP) — More than two years after Japan's nuclear disaster, damaged vehicles, twisted metal and other debris remains strewn about the Fukushima plant. Scores of black and gray pipes and hoses cover the ground in some places, part of the company's makeshift system to pump water into the damaged reactors to keep them from overheating.

Plant chief Takeshi Takahashi told journalists given a tour of the plant Wednesday that workers have cleaned up much of the debris in their work areas, but that the priorities are keeping the plant stable and working toward shutting it down — a process that operator Tokyo Electric Power Co. estimates will take 40 years.

"It's a long road, but we will tackle the decommissioning process by paying special attention to safety," he said.

TEPCO showed off a massive, nearly complete steel structure designed to help workers extract more than 1,500 fuel rods from a damaged reactor building — Unit 4 — at the center of international concerns.

The potentially risky procedure, expected to begin in November and take about a year, would be the first major step in the decommissioning of the Fukushima Dai-ichi plant, where three reactors melted down after the March 11, 2011, earthquake and tsunami, spewing radiation into the surrounding soil and water and forcing about 160,000 people to evacuate.

Concerns have focused on the fuel rods in the cooling pool of Unit 4 because the pool sits atop the damaged building and remains vulnerable to earthquakes. Currently, a jury-rigged system of pipes and hoses pumps water into the fuel pool to keep it cool, as well as into the reactor cores and fuel pools of nearby Units 1, 2 and 3.

TEPCO built the 52-meter (170-foot) tall structure next to and partially over the remains of Unit 4, which suffered a hydrogen explosion after the disaster, to safely remove the 1,533 fuel rods. The rods will be transferred to a joint cooling pool inside a nearby lower building.

After that project is completed, TEPCO will turn its attention to removing the melted fuel from the reactors of Units 1, 2 and 3. The company still isn't sure exactly where the fuel has fallen inside the reactors because radiation levels remain dangerously high inside the buildings.

The Fukushima plant has been hit with a series of problems in recent months, including a rat-induced blackout, adding to concerns about TEPCO's ability to safely shut down the plant.

Viewed from a bus that took foreign journalists — decked out in protective hazmat suits, masks and helmets — within about 20 meters (60 feet) of the four reactor buildings, the area closest to the ocean still was cluttered with debris, including an overturned car on top of a smashed truck.

All around the plant, there are reminders of the tsunami. There's a clear dividing line between short and tall vegetation on a hill, marking the height of the 15-meter (50-foot) tsunami that walloped the plant, knocking out power to vital cooling systems. An empty building with blown-out windows stands next to Unit 1, which also had a hydrogen explosion.

Another major challenge facing TEPCO is storing water that becomes radioactive as it is used to cool the reactors.

TEPCO says about 300,000 tons of water have been stored in about 1,000 tanks around the plant, and that the amount will double within a few years. It plans to build additional tanks to increase water storage capacity to as much as 800,000 tons by 2016.

Some of the contaminated water is ground water that has poured into reactor basements. The utility has drilled 12 holes nearby to try to suck up the water and lower the water table so that less pours in.

The plants never produced a watt of power.
May 5th, 2022
Follow Us
Most Recent