Solar projects in the desert, geothermal power in the mountains and wind energy off the East Coast were cited as examples of progress from top U.S. officials and industry leaders during a green energy conference on Tuesday in Las Vegas. 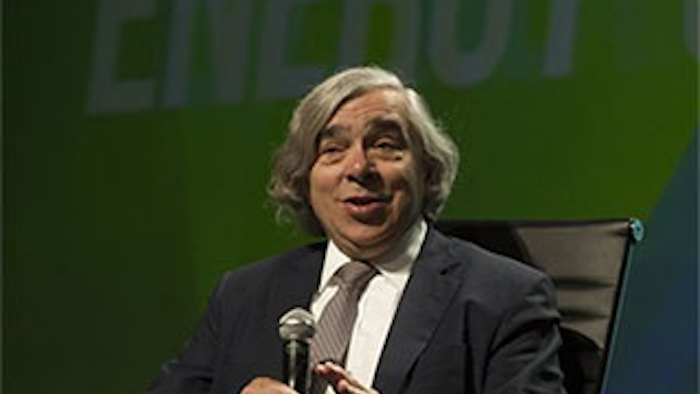 LAS VEGAS (AP) — Solar projects in the desert, geothermal power in the mountains and wind energy off the East Coast were cited as examples of progress from top U.S. officials and industry leaders during a green energy conference on Tuesday in Las Vegas.

But nuclear power nearly stole the show after a federal court in Washington, D.C., ruled that the Nuclear Regulatory Commission violated federal law by failing to approve or reject a decision on whether to issue a license for the Yucca Mountain nuclear waste repository some 90 miles northwest of Las Vegas.

The decision generated sharp responses from several officials attending the conference, including Sen. Harry Reid and Gov. Brian Sandoval. They both oppose the project.

U.S. Interior Secretary Sally Jewel used her appearance before some 600 inventors, innovators and investors at the sixth Clean Energy Summit at the Mandalay Bay resort to praise a geothermal electricity project in California's snow-capped mountains as an example for others.

Jewell said the Casa Diablo project near Mammoth Lakes in the Sierra Nevada is projected to produce enough electricity for 36,000 homes, and demonstrates a willingness by the federal Bureau of Land Management to cooperate with wind, solar and geothermal energy developers.

The administration's top land and water administrator also pointed to the first wind power lease sales in July off the coast of Massachusetts and Rhode Island, plans for another lease sale in September off the coast of Virginia, and the assignment of a 19th BLM solar energy zone in the West Chocolate Mountains of Southern California as progress in the production of renewable energy.

"We have now permitted 25 solar projects on public lands," Jewell said. "There were zero in 2009."

In all, Jewell said, the Obama administration has authorized 47 "utility-grade" solar, wind and geothermal projects on public land, along with transmission projects, "because it's great if you can generate it but it's no good if you can't move it."

Earlier, Reid joined a Moapa Band of Paiutes leader, Eric Lee, and an executive with New York-based K Road Power Holdings to announce a partnership aimed at building a solar array on reservation land outside Las Vegas capable of supplying electricity to thousands of homes annually.

Separately, the tribe announced plans to team with a subsidiary of local fuel retailer Terrible Herbst Oil Co., and California-based Stronghold Engineering to create a company, Moapa Energy, to design and develop energy projects on the reservation.

Energy Secretary Ernest Moniz spoke behind the scenes at the conference with Sandoval, a Republican, about federal plans to ship some 403 canisters of radioactive waste from a federal facility in Oak Ridge, Tenn., to the Nevada National Security Site. Sandoval has said the former national nuclear proving ground north of Las Vegas isn't appropriate for shallow burial of highly radioactive waste that could be used to build a "dirty bomb."

Moniz told reporters before the meeting that the state doesn't have jurisdiction over the shipments.

He said, however, that the Energy Department is reshaping plans in response to Sandoval's concerns, including questions about the safety of transporting the waste in and around Las Vegas.

The waste will be buried deeper than originally proposed, Moniz said, and transportation will be handled with the same security used for nuclear weapons.