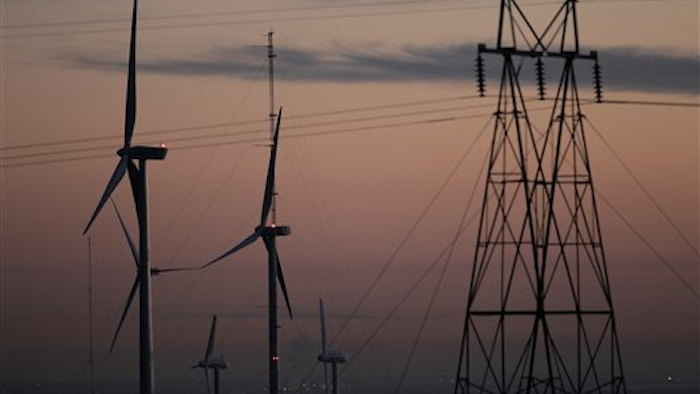 Even when the energy is needed most, weakness in the rural system linking wind turbines to the power grid mean wind companies are routinely taken offline or have their output reduced.

"This is a fact of life," said John Carroll, spokesman for Central Maine Power, which is responsible for the bulk of the grid in Maine.

More than $1 billion has been spent on wind turbines in northern Maine, New Hampshire and Vermont over the past decade. Wind power, touted as a cleaner alternative to coal or gas, has grown from 2 megawatts of capacity in 2005 to about 700 megawatts in the region today, more than the Vermont Yankee nuclear power plant.

But getting it to market remains a challenge.

Built on far-flung mountain ridges and hilltops, wind turbines routinely encounter bottlenecks as they send electricity to the regional power grid. At times of peak demand, energy producers are sometimes brought offline or scaled back to keep power lines from overheating, sagging or even catching fire. There's also concern that if the system is operating at full capacity and a transmission line should fail, it could overload other sections of the grid and cause a broader failure.

As it stands, the mandate of regional grid operator ISO New England from federal regulators is to ensure a reliable power grid. It's the power generation companies' responsibility to connect to the grid.

And taking producers offline, a move called a curtailment, is necessary to ensure the reliability of the power grid, ISO New England said.

But as wind projects are developed, the underlying assumptions of this strategy are under scrutiny.

ISO New England is being too cautious or not planning enough to integrate the renewable energy into the grid, Vermont's largest utility, Green Mountain Power, and Gov. Peter Shumlin have suggested.

Last month, Shumlin wrote a letter to ISO New England President Gordon van Welie, asking him to reconsider the guidelines that determine whether the grid could safely use the power generated by the 21-turbine, 45-megawatt project in Lowell that was curtailed during last month's heat wave. Another wind farm in Maine, which wasn't identified, was curtailed, as well.

At the same time, GMP had to fire up six jet fuel- and diesel-powered generators it has on standby for times of peak demand.

On Tuesday, van Welie answered Shumlin's letter, saying GMP knew its Lowell project faced those limitations and the problems would be reduced once a piece of equipment is installed to protect the grid.

Construction should be completed by the end of the year, but Vermont officials say ISO New England needs to plan better to ensure future projects don't face similar restrictions.

The challenges won't be going away soon.

The renewables industry is in its adolescence and the grid operator is playing the role of the cautious adult, said Rich Sedano, of the Montpelier-based Regulatory Assistance Project, which deals with electric regulatory issues around the world.

"What we are encountering now are growing pains," he said. "Part of it is the expectation of ISO New England, which is paid to be conservative. ... If there were a problem with reliability, no one would complain about their being too conservative."

In Maine, New England's wind energy leader with more than 500 megawatts of capacity, CMP is in the midst of a $1.4 billion upgrade that aims to double the capacity of the backbone of the state's grid by 2015. But it won't necessarily help far-flung wind farms, which still face challenges of getting to the grid, Carroll said.

In the meantime, curtailments will remain a fact of life.

"We've had to curtail wind and we'll continue to curtail wind," said Ellen Foley, an ISO New England spokeswoman. "We want to help people understand why we're doing it."

Ring reported from Montpelier, Vt., and Sharp from Portland, Maine.