A solar power developer has signed a lease for what could become the state's largest solar farm, producing up to 100 megawatts of electricity. 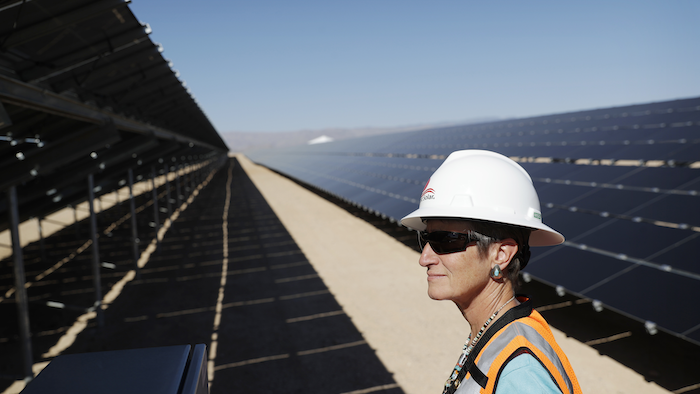 Secretary of the Interior Sally Jewell tours a solar project site, Thursday, Sept. 15, 2016, on the Moapa River Indian Reservation about 40 miles northeast of Las Vegas. Jewell was making her third stop on a tour of renewable energy sites around the country. (AP Photo/John Locher)

LIMESTONE, Maine (AP) — A solar power developer has signed a lease for what could become the state's largest solar farm, producing up to 100 megawatts of electricity, officials said Tuesday.

Ranger Solar wants to develop more than 600 acres at the former Loring Air Force Base, but first the Yarmouth-based company must clear regulatory hurdles and negotiate power purchase agreements with buyers of the energy.

"We know we have a long road ahead of us, but we're committed to it. We're hoping to bring new renewable energy to the region and new economic investment to northern Maine," said Aaron Svedlow, the company's director of environmental permitting.

Ranger Solar, which approached the local development authority last year, would like to see construction underway before 2019, which would allow for time for necessary approvals, he said.

The lease covers several parcels at the 3,800-acre Loring Commerce Centre, as the base is now known, said Carl Flora, president of the Loring Development Authority.

Airports have been popular places for solar projects because there's often compatible land near the runways, Flora said. The project won't limit future development at the former base and won't hinder future aeronautical uses of the land, he said.

The power produced by the solar farm, 100 megawatts, would be enough to supply thousands of homes. The former Maine Yankee nuclear power plant produced 900 megawatts.