Puerto Rico's troubled power company does not have the money to make more than $1 billion in payments due to creditors through July unless a restructuring deal is approved, officials said Tuesday. 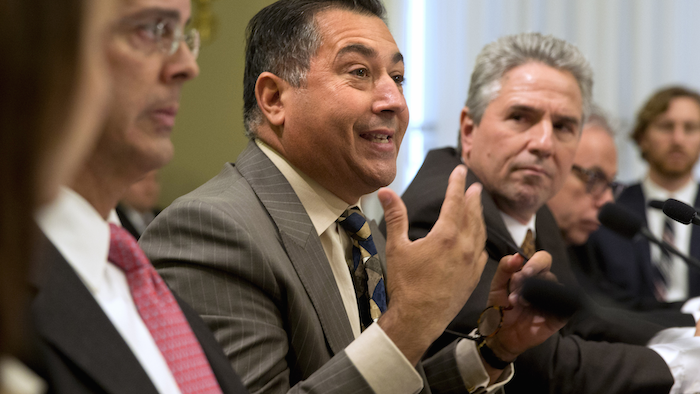 Carlos Rivera Vélez, with the Puerto Rico Manufacturers Association, center, testifies on Capitol Hill in Capitol Hill in Washington, Tuesday, Jan. 12, 2016, before the House Energy and Mineral Resources subcommittee hearing on the financial situation of Puerto Rico's Electric Power Authority. Officials say Puerto Rico's troubled power company does not have the money to make more than $1 billion in payments due to creditors through July unless a restructuring deal is approved. (AP Photo/Jacquelyn Martin)

SAN JUAN, Puerto Rico (AP) — Puerto Rico's troubled power company does not have the money to make more than $1 billion in payments due to creditors through July unless a restructuring deal is approved, officials said Tuesday.

The warning came during a hearing in Washington, D.C., by the congressional Subcommittee on Energy andMineral Resources on the financial situation of Puerto Rico's Electric Power Authority, the largest U.S. public power utility.

Lisa Donahue, the company's chief restructuring officer, said the $700 million due on fuel lines of credit and roughly $428 million due in principal and interest on outstanding bonds represent more than twice the amount of cash the company currently has available.

"(The company) will not be able to make up the difference with revenue from operations during this period," she said.

Puerto Rico recently defaulted on $37 million in interest on bonds and faces its first lawsuit over diverting funds to meet other bond payments amid an economic crisis.

Donahue said the power company already would have run out of money if it hadn't reached a restructuring deal in December with 70 percent of those who hold its debt. That deal still requires Puerto Rico legislators to approve a bill that would reform the company. Critics warn that would hurt cash-strapped clients by giving the agency too much power to hike rates, among other changes.

Puerto Rico's power bills are on average almost twice those in the U.S. mainland and have contributed to the island's economic crisis by scaring away potential investors and forcing some businesses to close or lay off workers.

Government officials including Pedro Pierluisi, the island's representative in Congress, urged Congress to provide Puerto Rico with a restructuring mechanism.

"If these hearings are merely a forum for Congress to criticize the Puerto Rico government, while disregarding its own contribution to the crisis, this is not a constructive exercise," Pierluisi said.

Donahue, however, acknowledged that she didn't know if a bankruptcy mechanism would lead to lower bills or boost the island's manufacturing sector.

Meanwhile, Republican Rep. Raul Labrador of Idaho asked why the agency was having trouble collecting money from customers including municipalities and urged officials to find their own solutions to the financial crisis.

"You don't need Congress to help you be responsible," he said.

Puerto Rico has been mired in economic stagnation for nearly a decade and faces $72 billion in public debt that the governor has said is unpayable and needs restructuring. The power company, which has come under scrutiny following numerous allegations of corruption, holds some $9 billion of that debt.