TransCanada argues in a new court filing that President Obama exceeded his constitutional authority by rejecting the Keystone XL pipeline. 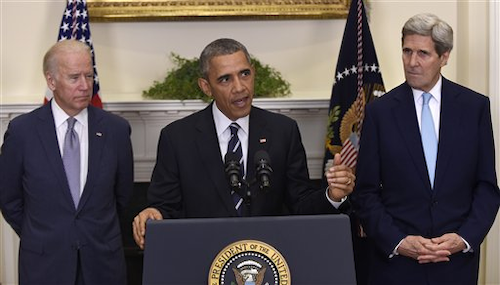 TransCanada argues in a new court filing that President Obama exceeded his constitutional authority by rejecting the Keystone XL pipeline.

The Canadian energy giant filed a lawsuit in federal court in Houston that seeks to overturn the November decision denying the pipeline.

A second measure filed by TransCanada, meanwhile, alleged that the rejection violated the terms of the North American Free Trade Agreement and seeks more than $15 billion in damages.

The Keystone XL project, which was first proposed in 2008, sought to complete a massive pipeline network between Canadian oil reserves and Gulf Coast refineries.

The proposal, however, came to exemplify the general dispute in Washington between business interests and environmental advocates.

President Obama ultimately rejected the project over a State Department finding that it would not advance the national interest. But he also said that Keystone XL would "undercut" U.S. leadership on climate change ahead of a sweeping UN conference in Paris.

TransCanada, in the Houston lawsuit, countered that the president could not unilaterally reject the project, particularly if the decision "rests on foreigners’ mistaken objections."

"Any power to prohibit such activities unquestionably would rest in the Congress, not the president acting without statutory authority," the company's attorneys wrote.

The NAFTA challenge, meanwhile, alleged that the November decision was a "symbolic gesture" rather than a decision based on the project's merits.

The U.S. has never lost a NAFTA case, but TransCanada said that a careful evaluation showed "a clear violation of NAFTA in these circumstances."

"Stated simply, the delay and the ultimate decision to deny the permit were politically-driven, directly contrary to the findings of the administration’s own studies, and not based on the merits of Keystone’s application," the filing said.