The wind farm will power Block Island, a group of about 1,000 year-round residents who currently use diesel fuel shipped from the mainland. 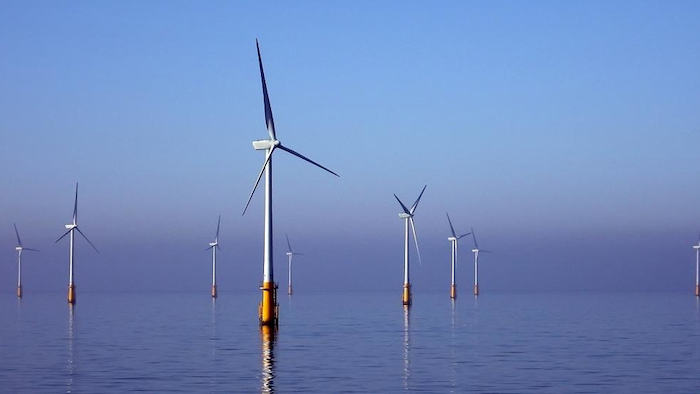 Gizmodo published an article about a public tour held at the facility in October in advance of turning the giant fan blades on for the first time, including a look at the “sky-diving” sometimes needed in order to do maintenance. Deepwater Wind’s Block Island Wind Farm in Rhode Island cost $300 million, funded by Deepwater Wind and other private investors.

The wind farm will power the small community of Block Island, a group of about 1,000 year-round residents who currently use diesel fuel shipped from the mainland. The utility company National Grid will also buy power from Deepwater Wind and sell it around Rhode Island.

A previous large-scale offshore wind project in New England, the $2.6 billion Cape Wind in the Nantucket sound, was held back by an opposition movement after receiving state and federal approval. Although it was set up to have 130 turbines and be larger than Block Island Wind Farm, construction never began on Cape Wind.

The Rhode Island Manufacturers Association sued National Grid, Deepwater Wind, and some members of the Rhode Island Public Utilities Commission over the Block Island wind farm in July, saying that the farm’s agreement with National Grid would increase the cost of electricity. A federal judge dismissed the suit.

According to the U.S. Department of Energy, more than 2,000 gigawatts of energy could potentially be harvested using offshore wind farms in the oceans and the Great Lakes. Deepwater Wind estimates the facility to run at 45 percent capacity in average wind speeds, which matches 2011 predictions about improved efficiency.

Federal installations face a deadline of making 80 cores per year by 2030, with the first 30 due in five years.
Feb 18th, 2021
Follow Us
Most Recent