Known as the Wendelstein 7-X stellarator, the $435 million device was first fired up in December using helium. This time, they used hydrogen. 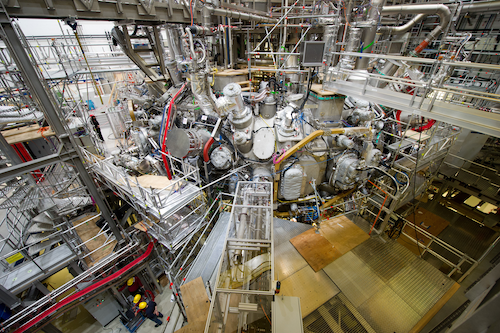 The nuclear fusion research center at the Max Planck Institute for Plasma Physics where the first plasma has been produced at the "Wendelstein 7-X" in Greifswald, Germany. (Stefan Sauer/dpa via AP, File)

Scientists in Germany flipped the switch Wednesday on an experiment they hope will advance the quest for nuclear fusion, considered a clean and safe form of nuclear power.

Following nine years of construction and testing, researchers at the Max Planck Institute for Plasma Physics in Greifswald injected a tiny amount of hydrogen into a doughnut-shaped device — then zapped it with the equivalent of 6,000 microwave ovens.

The resulting super-hot gas, known as plasma, lasted just a fraction of a second before cooling down again, long enough for scientists to confidently declare the start of their experiment a success.

"Everything went well today," said Robert Wolf, a senior scientist involved with the project. "With a system as complex as this you have to make sure everything works perfectly and there's always a risk."

Among the difficulties is how to cool the complex arrangement of magnets required to keep the plasma floating inside the device, said Wolf. Scientists looked closely at the hiccups experienced during the start-up of the Large Hadron Collider in Switzerland more than five years ago to avoid similar mistakes, he said.

The experiment in Greifswald is part of a world-wide effort to harness nuclear fusion, a process in which atoms join at extremely high temperatures and release large amounts of energy. 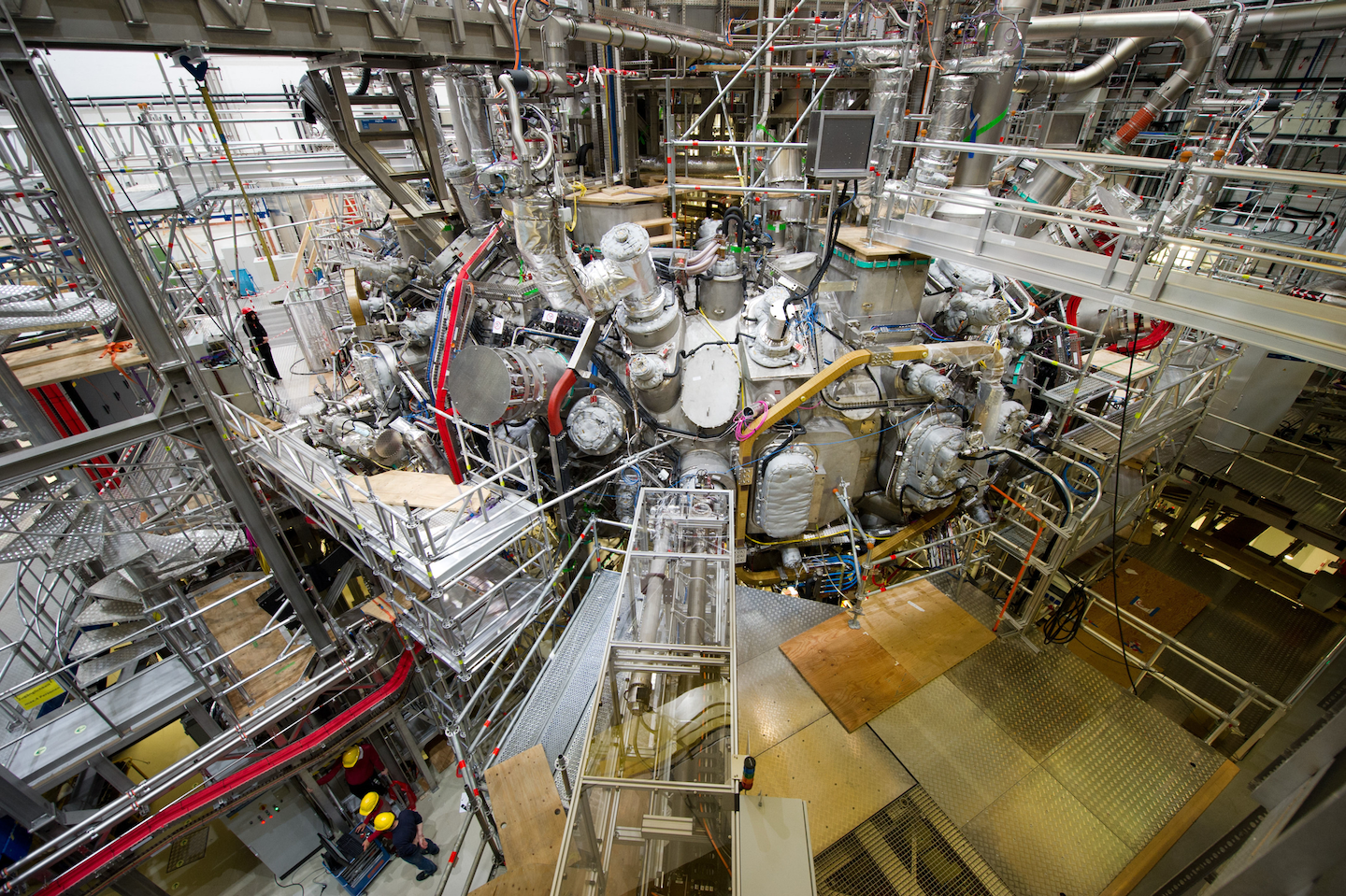 The nuclear fusion research center at the Max Planck Institute for Plasma Physics where the first plasma has been produced at the "Wendelstein 7-X" in Greifswald, Germany. (Stefan Sauer/dpa via AP, File)

Advocates acknowledge that the technology is probably many decades away, but argue that — once achieved — it could replace fossil fuels and conventional nuclear fission reactors.

Construction has already begun in southern France on ITER, a huge international research reactor that uses a strong electric current to trap plasma inside a doughnut-shaped device long enough for fusion to take place. The device, known as a tokamak, was conceived by Soviet physicists in the 1950s and is considered fairly easy to build, but extremely difficult to operate.

The team in Greifswald, a port city on Germany's Baltic coast, is focused on a rival technology invented by the American physicist Lyman Spitzer in 1950. Called a stellarator, the device has the same doughnut shape as a tokamak but uses a complicated system of magnetic coils instead of a current to achieve the same result.

The Greifswald device should be able to keep plasma in place for much longer than a tokamak, said Thomas Klinger, who heads the project.

"The stellarator is much calmer," he said in a telephone interview ahead of the start. "It's far harder to build, but easier to operate."

Known as the Wendelstein 7-X stellarator, or W7-X, the 400-million-euro ($435 million) device was first fired up in December using helium, which is easier to heat. Helium also has the advantage of "cleaning" any minute dirt particles left behind during the construction of the device.

David Anderson, a professor of physics at the University of Wisconsin who isn't involved in the project, said the project in Greifswald looks promising so far. 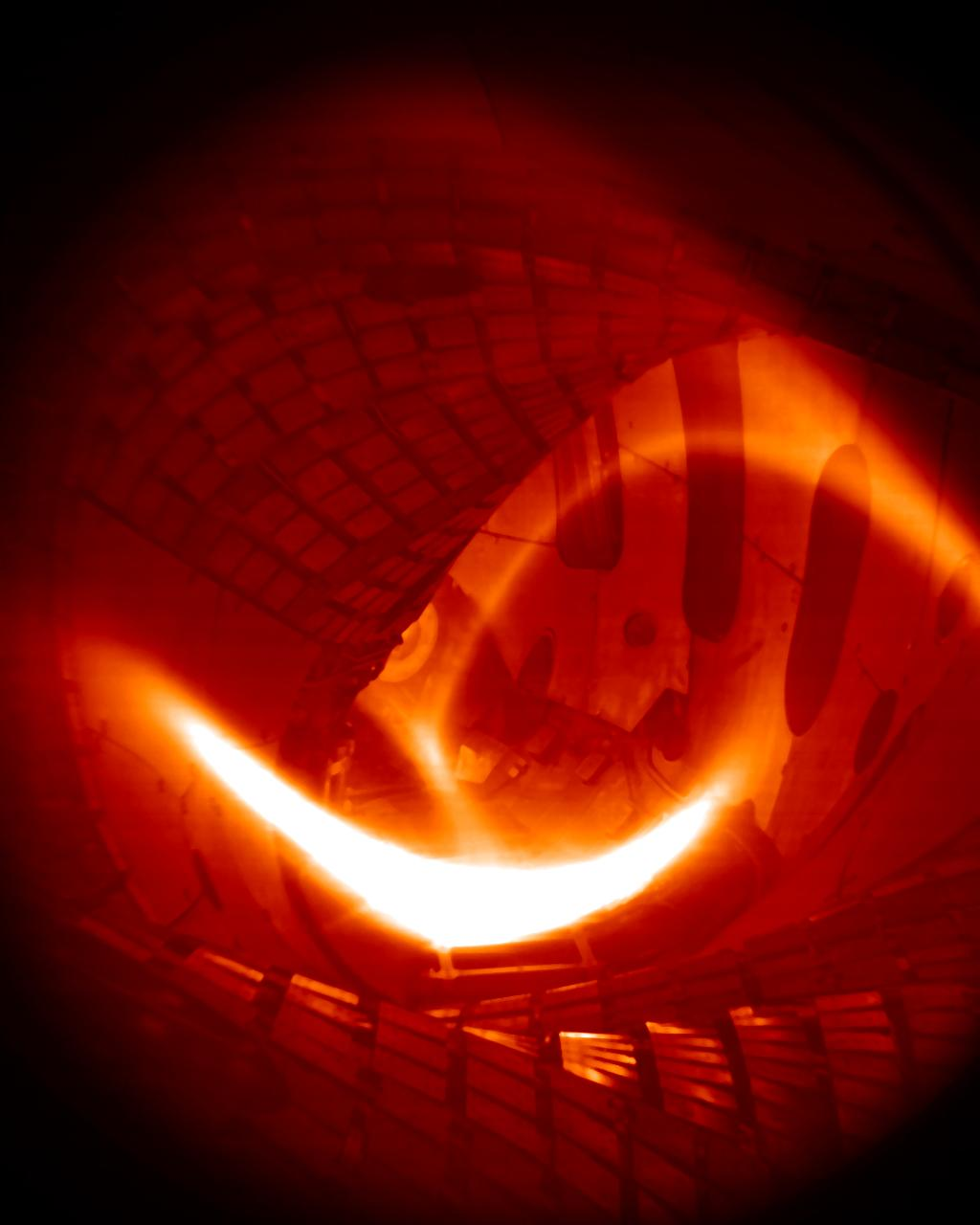 "The impressive results obtained in the startup of the machine were remarkable," he said in an email. "This is usually a difficult and arduous process. The speed with which W7-X became operational is a testament to the care and quality of the fabrication of the device and makes a very positive statement about the stellarator concept itself. W7-X is a truly remarkable achievement and the worldwide fusion community looks forward to many exciting results."

While critics have said the pursuit of nuclear fusion is an expensive waste of money that could be better spent on other projects, Germany has forged ahead in funding the Greifswald project, costs for which have reached €1.06 billion euros in the past 20 years if staff salaries are included.

Chancellor Angela Merkel, who holds a doctorate in physics, personally pressed the button at Wednesday's launch.

"As an industrial nation we want to show that an affordable, safe, reliable and sustainable power supply is possible, without any loss of economic competitiveness," she said. "The advantages of fusion energy are obvious."

The United States Department of Energy, too, contributed funding for the project, giving American scientists a chance to help develop cutting-edge technology and participate in the experiment, said Edmund J. Synakowski, the DoE's associate director.

Although it's not designed to produce any energy itself, scientists hope that over the coming years W7-X will test many of the extreme conditions such devices will be subjected to if they are ever to generate power.