Falling Oil Prices Will End Eventually, But Not Anytime Soon

On Tuesday the Energy Department lowered its expectations for crude oil and most fuels for this year and next. 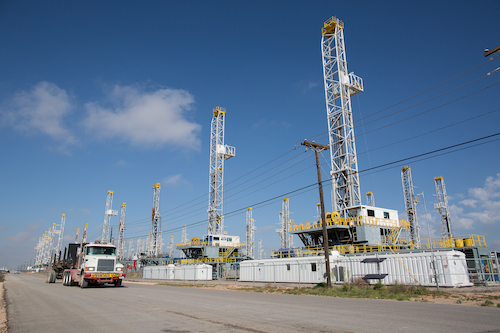 Even after trending down for a year and a half, U.S. crude has fallen another 17 percent since the start of the year and is now probing depths not seen since 2003.

"All you can do is forecast direction, and the direction of price is still down," says Larry Goldstein of the Energy Policy Research Foundation, who predicted a decline in oil in 2014.

On Tuesday the price fell another 3 percent to $30.44 a barrel, its lowest level in 12 years. Oil had sold for roughly $100 a barrel for nearly four years before beginning to fall in the summer of 2014.

Many now say oil could drop into the $20 range.

The price of crude is down because global supplies are high at a time when demand for it is not growing very fast. The price decline, already more dramatic and long-lasting than most expected, deepened in recent days because economic turmoil in China is expected to cut the growth in demand for oil further.

Lower crude prices are leading to lower prices for gasoline, diesel, jet fuel and heating oil, giving drivers, shippers, and many businesses a big break on fuel costs. The national average retail price of gasoline is $1.96 a gallon.

On Tuesday the Energy Department lowered its expectations for crude oil and most fuels for this year and next. The department now expects U.S. crude to average $38.54 a barrel in 2016.

But layoffs across the oil industry are mounting, and oil company bankruptcies are expected to soar. BP announced layoffs of 4,000 workers on Tuesday. Fadel Gheit, an analyst at Oppenheimer & Co, says as many as half of the independent drilling companies working in U.S. shale fields could go bankrupt before oil prices stabilize. 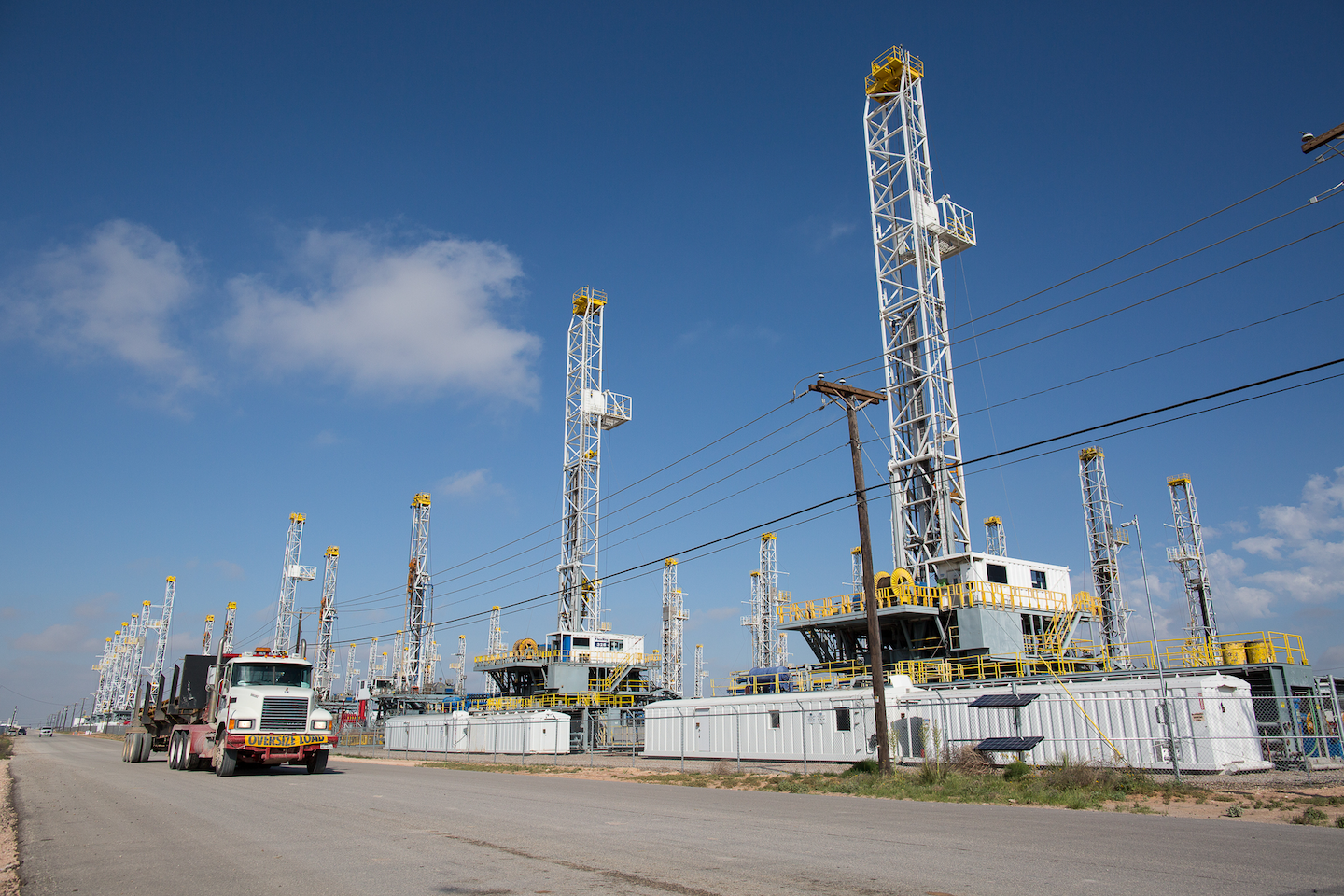 A boom in U.S. oil production thanks to new drilling technology helped push global supplies higher in recent years. Other major oil producers and exporters in the Middle East and elsewhere have declined to reduce their own output in an attempt to push prices back up. Iran, trying to emerge from punishing economic sanctions, is looking to increase exports in the coming months, which could add further to global oil stockpiles.

The Energy Department said U.S. crude oil inventories "remain near levels not seen for this time of year in at least the last 80 years." It says global supplies exceed global demand by about 1 million barrels per day on average. Economists at the Federal Reserve Bank of Dallas believe excess inventories won't begin falling until 2017.

The higher supplies and lower prices haven't stimulated a sharp rise in demand. Most of the increase in world oil demand over the past several years has come from China, but signs are pointing to much slower economic growth there, which in turn reduces demand for fuels made from crude.

Disappointing reports last week about China's manufacturing sector and a fall in the yuan's value triggered a global stock sell-off and an even more dramatic decline in the price of oil and other commodities.

The first five days of the year marked the worst start of a year for oil in history, according to S&P Dow Jones Indices, and oil has only fallen further since.

Motorists are saving every time they fill up. The Energy Information Administration figures that the average U.S. household saved $660 on gasoline in 2015 compared the year before, and gasoline is expected to fall another 16 percent in 2016. Tuesday the EIA forecast that gasoline will average $2.03 a gallon for 2016, the lowest since 2004, from $2.43 last year.

Airlines, big users of jet fuel, have posted record profits, and shippers and other businesses are also saving from cheaper energy.

But workers in the oil patch have paid the price. About 17,000 oil and gas workers in the U.S. lost their jobs in 2015, but if you include oilfield support jobs the number is about 87,000, according to Michael Plante, an economist at the Dallas Fed who has written about the effect of oil prices on the economy.

Even so, economists say low oil prices are still a net benefit for the U.S. economy.

"Consumers have more money in their pocketbooks," says Amy Myers Jaffe, an energy consultant who teaches at the University of California, Davis. And for businesses, "I can hire more people or buy new equipment because I no longer have to spend that money on energy." 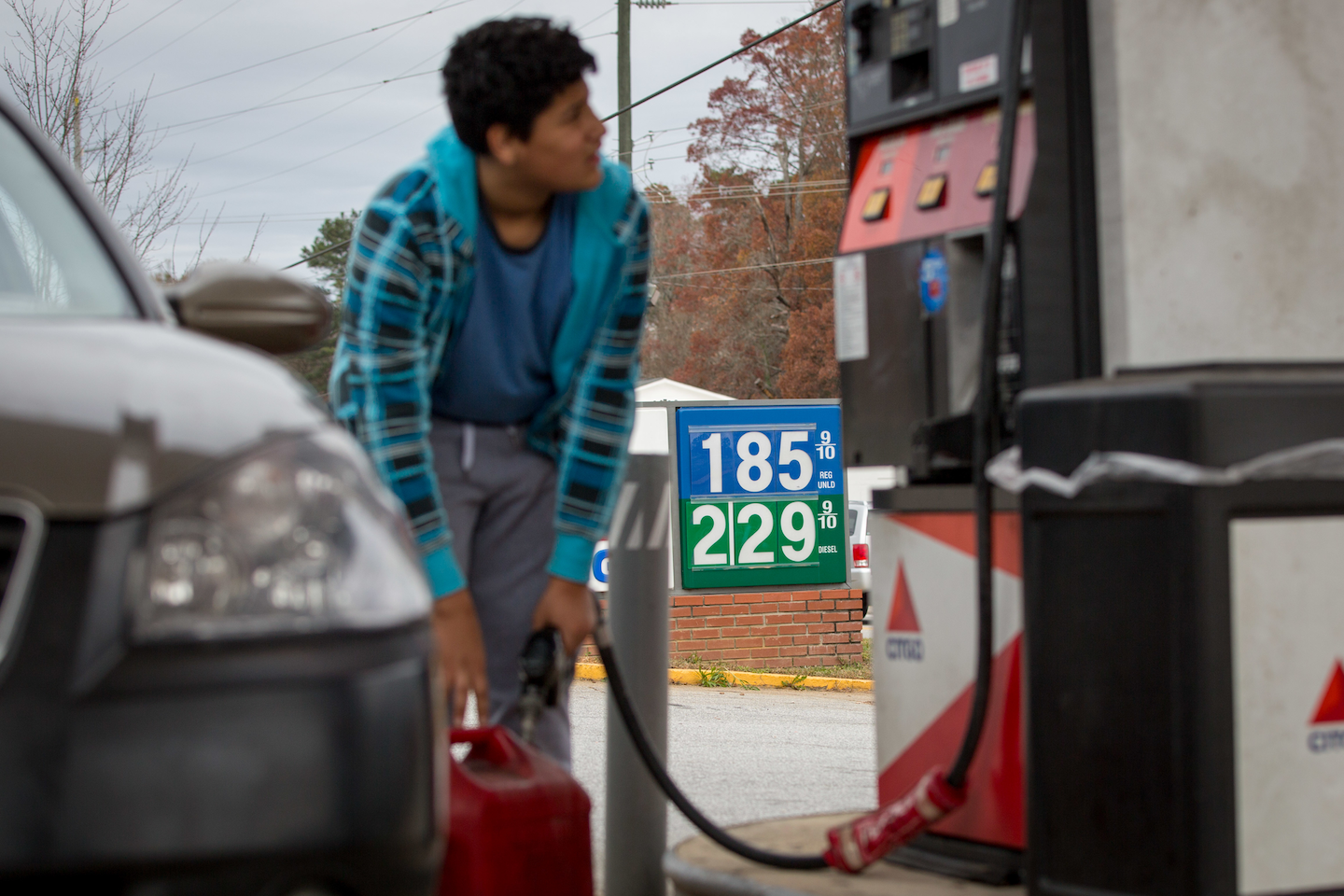 The price of oil continues to fall, extending a slide that has already gone further and lasted longer than most thought, and probing depths not seen since 2003. (AP Photo/Kevin Liles)

When Does It End?

Oil traders and Wall Street analysts expect further declines in oil prices in the coming weeks. Several have predicted that prices will fall below $30 a barrel and even approach $20 a barrel.

But prices are expected to rise sooner or later. Tension between Saudi Arabia and Iran has increased in recent weeks, and Middle East turmoil often causes prices to rise because traders worry about a potential disruption in supplies in the world's most important oil region.

And just as $100 oil encouraged the new production that contributed to this plunge in prices, $30 oil is discouraging the big investment needed for exploration and production for the future. The number of rigs drilling for oil in the U.S. has fallen by more than two-thirds, to 516 last week from an October 2014 peak of 1,609, according to a closely-watched count by the drilling services company Baker Hughes.

Eventually, analysts say, the supply will fall below demand and prices will rise. Oppenheimer's Gheit thinks oil will eventually rise and settle into a range between $50 and $70 a barrel — but not anytime soon.

"The longer it remains low, the more violent the reaction to the upside is going to be," he says.