The leaking well is the largest natural gas storage facility west of the Mississippi River and can provide energy to all of Southern California for a month. 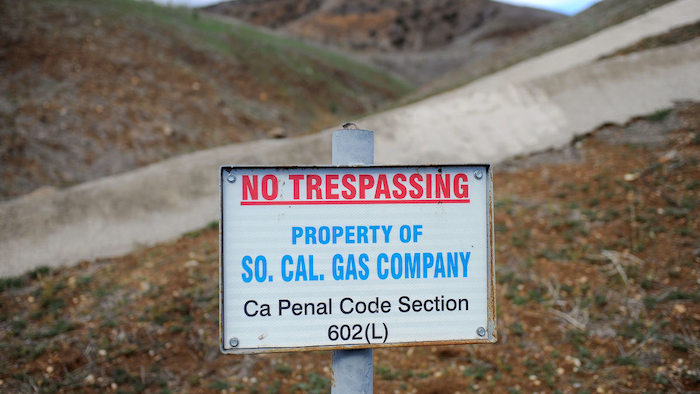 A sign declares the boundary line of the Southern California Gas Co. gas fields where a gas well has been leaking methane daily near the community Porter Ranch, Calif., Thursday, Jan. 7, 2016. California Gov. Jerry Brown declared a state of emergency over the massive natural-gas leak that has been spewing methane and other gases into a Los Angeles neighborhood for months, sickening residents and forcing thousands to evacuate. (AP Photo/Michael Owen Baker)

Laura Gideon and her family endured the sickening stench from an out-of-control natural gas leak for about a month before they could no longer tolerate the nausea, headaches and nosebleeds.

After she went to the emergency room in November vomiting and with a severe migraine, Gideon, her husband and their two children abandoned the only home they'd ever known together in the upscale Los Angeles suburb of Porter Ranch.

They moved in with her parents about 10 miles away to await a fix that could still be months away.

"We're in mourning now," she said. "We didn't ever want to leave. We were in a nice gated community. We were safe, you know, supposedly good schools. This wasn't our plan."

Thousands of her neighbors have voluntarily followed suit in an exodus from an invisible threat that wafts occasionally and doesn't sicken everyone in its path, though it continues to spew enormous amounts of climate-changing methane.

The leak has cost the utility $50 million so far and is expected to balloon as the company tries a tricky fix to plug a well deep underground, while also shelling out compensation for exasperated residents and fighting dozens of lawsuits.

Gov. Jerry Brown declared an emergency last week for the prolonged blowout that requires the utility to cover the costs and instructs state regulators to protect ratepayers.

The well is one of 115 in the Santa Susana Mountains where Southern California Gas Co., a division of San Diego-based Sempra Energy, stores natural gas in a vacant oil field about a mile and a half underground. It is the largest natural gas storage facility west of the Mississippi River and can provide energy to all of Southern California for a month.

It has been gushing the equivalent of about a quarter of the state's daily output of methane, along with other gases, since it was reported Oct. 23. It is also blamed for depositing tiny oil droplets on cars and houses that are about a mile away. 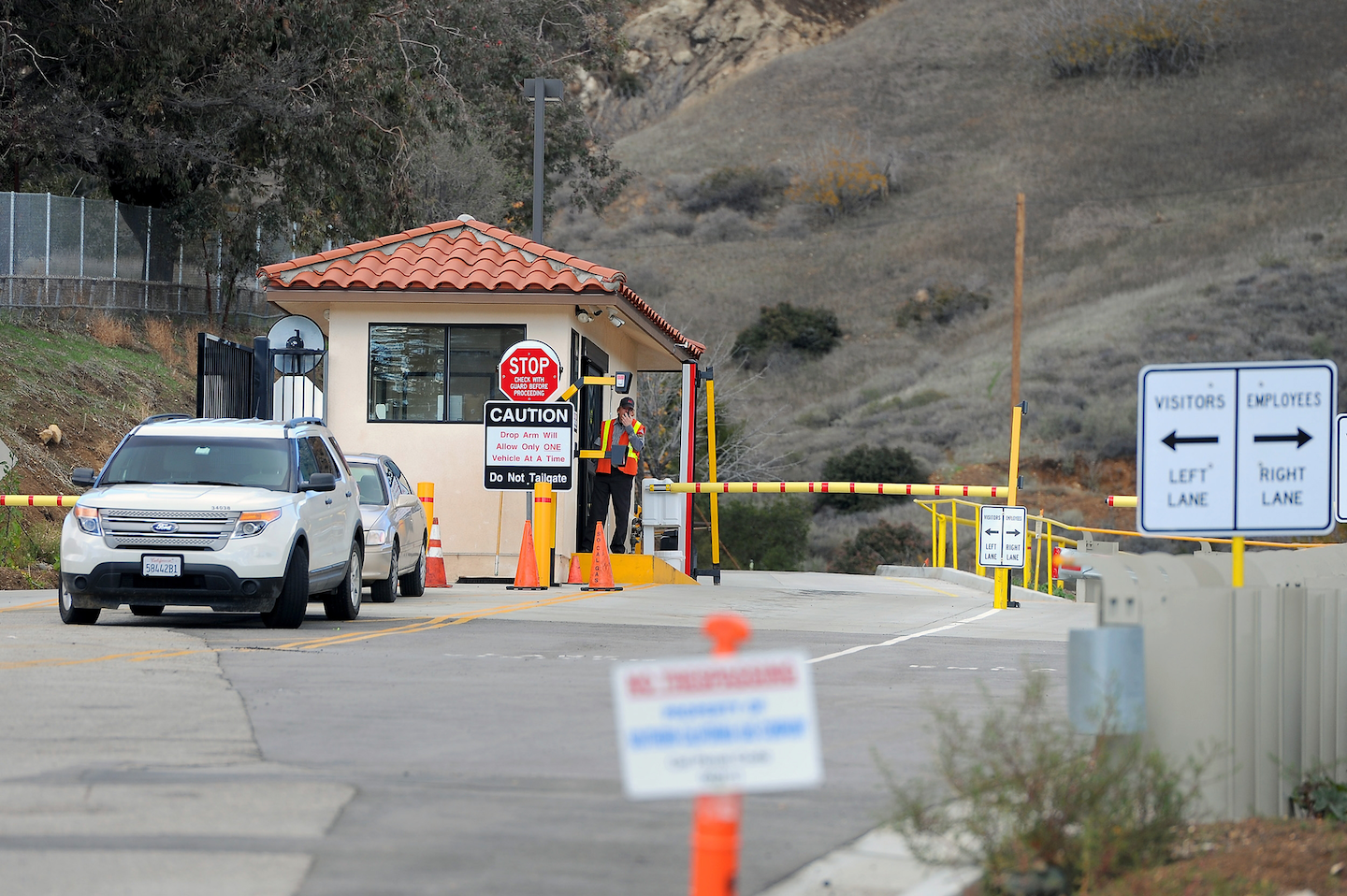 A guard gate is manned at the entrance of the Southern California Gas Co. gas fields where a gas well has been leaking methane daily near the community Porter Ranch. (AP Photo/Michael Owen Baker)

The hillside Porter Ranch community of about 30,000 people in mostly single-family homes has grown considerably in the three decades since scenes in the movie "E.T. the Extraterrestrial" were filmed here.

Public health officials said most of the gas is dissipating and not causing long-term problems, though many residents have left because they doubt the air is safe. Foul-smelling additives that make highly flammable gas detectable have been blamed for maladies including irritated throats, coughs and respiratory problems.

"It's like being in a disaster area, but it's not a disaster you can see," said Sue Hammarlund, who has seen her share of national disasters as a Red Cross volunteer and has suffered from headaches and nosebleeds recently. "I think this is more debilitating mentally."

Two local schools nearest the leak closed in December and nearly 1,900 students will start the year at different schools Tuesday.

On Saturday, hundreds of residents crowded into a high school gym to urge air quality regulators who are reviewing a proposal to control the leak to take more aggressive action and shut down the gas storage facility.

While more than 4,500 families have either left or are on the move, many have stayed behind — either because they're not bothered by the smell, aren't worried or don't want to hassle with moving.

Bob Casselman has lived near the entrance to the gas facility 43 years. His wife, Pat, has only noticed the smell a few times and had very few symptoms. The retirees are concerned about the impact on property values, but they're not moving.

"I can't understand all these people," Bob Casselman said. "Everybody wants a freebie ... Unless something's really bad, we don't complain."

The company has apologized for failing to disclose the leak after residents began complaining about the smell and for reacting slowly to their concerns.

The incident is unprecedented for a utility and it is "forging new ground," said Gillian Wright, a SoCalGas vice president.

Under orders from the county health department to relocate people who want to leave, SoCalGas has offered to pay up to $250 a night for hotels, plus $45 per person per day for food, or up to up to $7,500 a month for rental homes. The leak is expected to be stopped in March, but the company has agreed to house people through April.

Some residents have complained about not getting help calls returned and not finding relocation services helpful. 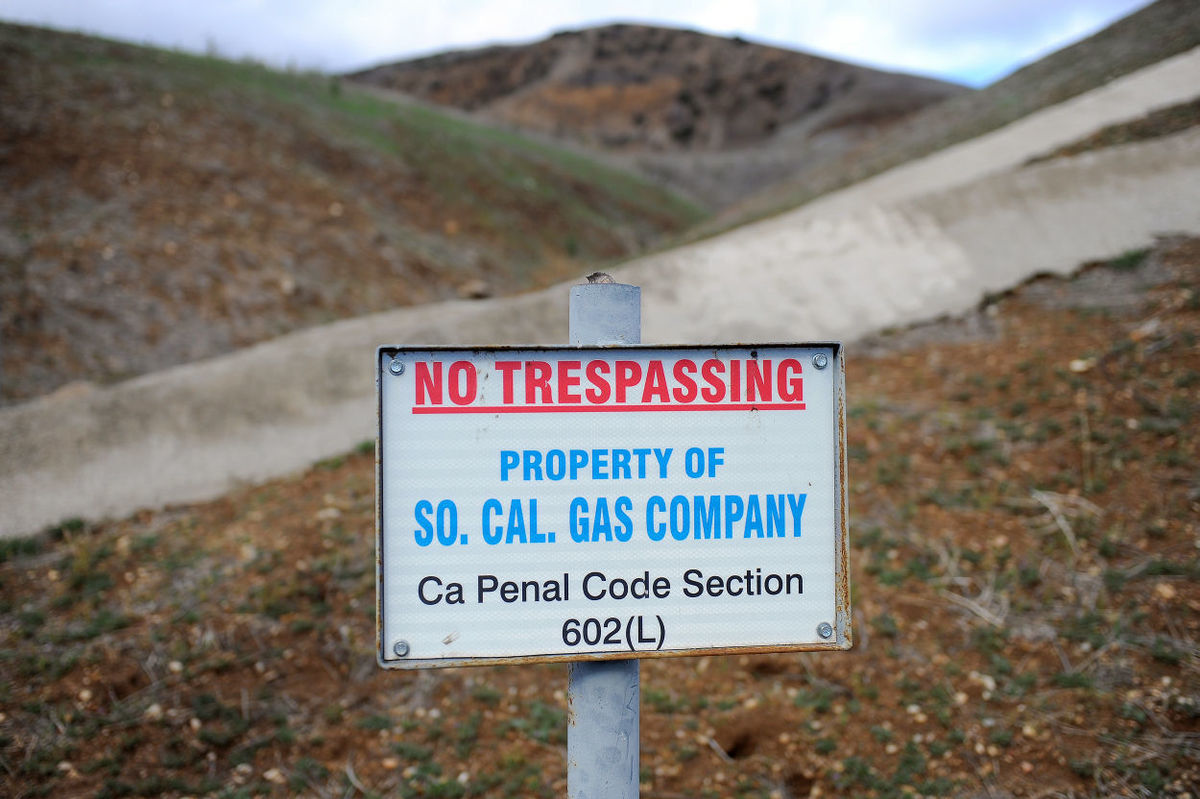 A sign declares the boundary line of the Southern California Gas Co. gas fields where a gas well has been leaking methane daily near the community Porter Ranch, Calif., Thursday, Jan. 7, 2016. California Gov. Jerry Brown declared a state of emergency over the massive natural-gas leak that has been spewing methane and other gases into a Los Angeles neighborhood for months, sickening residents and forcing thousands to evacuate. (AP Photo/Michael Owen Baker)

Cheri Derohanian said representatives she spoke with in Chicago and Colorado were useless because they didn't know the lay of the land. One found her a downtown Los Angeles condo that was 30 miles away and better suited for urban hipsters than her family of four.

"We're not a bunch of hicks. We're like Porter Ranch, it's like, you know, the Beverly Hills of the valley," Derohanian said. "We're like BMW people and you're giving us Pinto service."

Many have set out on their own only to lose bidding wars to neighbors or encounter sky-high rents when landlords realize they're gas leak refugees.

Megan Zahedi said she hasn't been helped by the gas company and when she sought housing she found rents doubled to $9,000 a month and houses were snapped up immediately.

"We're not looking for a vacation provided by the gas company," said the single mother, who fears paying a mortgage and additional rent. She feels like a bad parent as her two children suffer from rashes, nausea and headaches, and have been abandoned by their friends.

Down the street in the 1,100-home Porter Ranch Estates, Gideon entered a dark and cold home to pick up a few things Wednesday. She moved here with her college sweetheart 17 years ago. It's where her children took their first steps. The heights of the two are penciled on a wall in the garage.

Everything in the two-story stucco-and-brick house was as they left it seven weeks ago. Portraits and family vacation photos lined walls and shelves. Her husband's UCLA football jersey was framed on the family room wall. Toys and dolls were scattered on her daughter's bedroom floor.

A neighbor who is among those who fear a crime spike in vacant houses called to make sure it was Gideon in the house.

The stench was gone that day. Her 11-year-old daughter, Faith, didn't get a headache and said it felt good to be home — even briefly. Gideon isn't sure what the future holds, but she doesn't plan to return permanently.

"The American dream turned into a bit of disaster for us," she said. "We're not coming back. In my opinion, it would be negligent."