The liquefied natural gas project would be one of the largest of its kind. 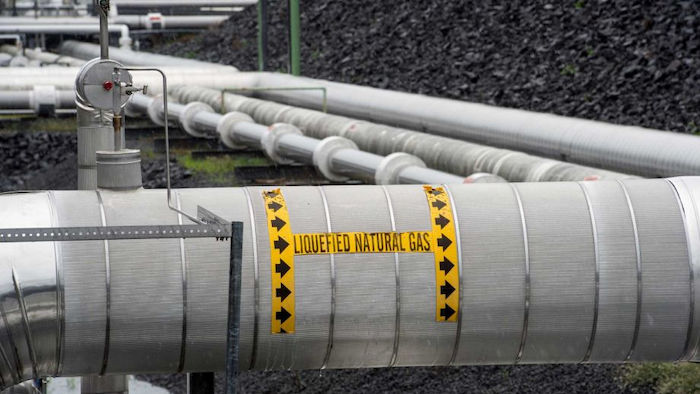 The Legislature on Wednesday approved buying out one of the state's partners in a proposed major gas project, taking over an increased share of the project that many hope could be a boon for Alaska as oil production declines.

The House on Wednesday voted 39-0 to pass legislation authorizing $157 million for the buyout and project-related costs. Of that, an estimated $68 million will go to Canadian pipeline company TransCanada Corp. to acquire TransCanada's interest in the project. The Senate approved the bill 16-3 on Tuesday.

Lawmakers have been meeting in special session since Oct. 24 to consider Gov. Bill Walker's recommendation to approve the buyout. The House adjourned from the special session Wednesday; the Senate is expected to do so on Thursday.

"I applaud the Legislature for coming together to help advance a project that best serves Alaska's future," Walker said in a release.

As envisioned, the liquefied natural gas project would be one of the largest of its kind, with an 800-mile pipeline, a gas treatment plant and transmission lines connecting to gas fields, and a liquefaction plant and export terminal. Asia is the anticipated overseas market and access points along the pipeline route are expected to serve Alaskans.

A decision on whether to build the project could be a few years away, and there's no guarantee it will be built.

Alaskans have long seen a gas project as a way to shore up revenue amid declining oil production, but numerous efforts to launch one have gone nowhere. There are high hopes for this project, in part because of the involvement of the North Slope's major producers — BP, ConocoPhillips and Exxon Mobil Corp. — and the importance to the state's financial future as oil production declines.

"I see no other way that we can continue to pay the state's bills into the future without this pipeline," said Rep. Mark Neuman, R-Big Lake, and co-chair of the House Finance Committee.

In the deal with TransCanada, the state was obligated to pay the company for costs it put into the project on the state's behalf, plus about 7 percent interest, regardless of whether the project succeeds or fails, according to a consultant for the Walker administration, Deepa Poduval. The roughly $68 million is to reimburseTransCanada for costs so far.

In pushing for a buyout, Walker's administration is betting it can get financing cheaper elsewhere.

The administration also argued that a buyout would increase the state's voting rights and allow it to have a more direct say in the decision-making process. The Alaska Gasline Development Corp. is expected to acquireTransCanada's interest in the project.

During the session, a TransCanada official, Vincent Lee, told lawmakers the company believes in the project but also agrees with Walker's recommendation to buy out TransCanada's interest. He said the company and Walker administration are approaching the project from different angles. He called it a mutual dissolution.

Of the $157 million in spending authorized by the bill, roughly $89 million would go toward state project costs.

The state's upfront investment costs could be $7 billion to $8 billion higher without TransCanada'sinvolvement, but Alaska also could get up to $400 million more in annual cash flows once the project is operational, based on the expectation of cheaper financing, Poduval has said.

Legislative consultants said the financial case for keeping or getting rid of TransCanada was too close to be persuasive and that the decision on whether to buy out the company should be based on strategic considerations.

Many legislators agreed that it made sense to part ways with TransCanada now, though some expressed concerns about the level of organization of the state's gas team. The House narrowly passed a resolution introduced Wednesday, calling on Walker to clearly describe the organizational structure and authority of those authorized to help the Alaska Gasline Development Corp. in the gas project.

The next big date looming for the project is Dec. 4, when the project partners are scheduled to vote on a work plan and budget for 2016. Walker also is seeking agreements with the producer partners to ensure their gas could not be withheld from the project even if they are no longer involved.