Icebergs near tankers carrying oil from the trans-Alaska pipeline are likely to be smaller but more numerous over the next two decades. 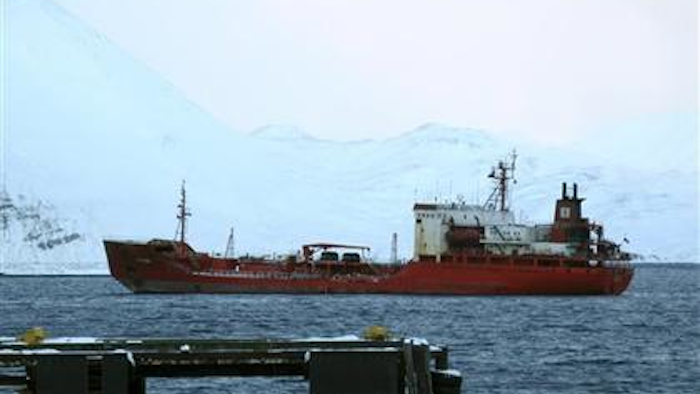 Icebergs that threaten tankers carrying oil from the trans-Alaska pipeline are likely to be smaller but more numerous over the next two decades, according to a study by a citizens oversight group.

Ice that calves off the Columbia Glacier near Valdez has to travel farther to reach shipping lanes because the glacier has receded more than 10 miles since 1980, according to the report prepared for the Prince William Sound Regional Citizens' Advisory Council. The longer distance to Prince William Sound means icebergs have more opportunity to shrink from melting and fracturing.

Ice remains a serious threat, however. Smaller icebergs can more easily clear an underwater barrier, the glacier's terminal moraine, which grounds the largest icebergs leaving Columbia Bay. The smaller icebergs that can float over the moraine will continue to be a hazard, said Mark Swanson, director of the council.

"It's going to pose a risk for shipping for the foreseeable future," until the glacier finally retreats out of the ocean and onto land, he said by phone from Valdez.

The citizen's council was created in the aftermath of the grounding of the Exxon Valdez, a 987-foot tanker that struck Bligh Reef on March 24, 1989. The Exxon Valdez spilled roughly 11 million gallons of crude oil. It was the nation's largest oil spill until the 2010 Deepwater Horizon blowout in the Gulf of Mexico.

The crew of the Exxon Valdez had received permission to stray from shipping lanes to avoid Columbia Glacier ice.

"They just forgot to turn back and then they found a reef," Swanson said. "They avoided one hazard and found another."

An iceberg figured into a second tanker incident five years later. The 894-foot Overseas Ohio, heading north to pick up oil, struck an iceberg head-on. The collision tore a 17-by-20-foot hole in the vessel's bulbous bow.

Icebergs that ride low in the water, weighed down by rock, are hard to see.

"Those are the ones that could really booger up a ship," said Swanson, a former Coast Guard officer who was captain of the port in Valdez from 2002 to 2005.

The trans-Alaska pipeline these days carries an average of 496,571 barrels of Alaska North Slope crude oil per day. Tankers carry the oil to West Coast refineries.

Advancing glaciers flowing into the ocean gouge a deep trench and push forward a wall of rock and debris on which ice rests. As the Columbia Glacier has retreated, that underwater terminal moraine has acted as a barrier to big icebergs near the head of Columbia Bay. The moraine is 60 feet deep at its deepest point. In the past, Swanson said, large icebergs would run aground on the moraine and clog the movement of icebergs.

The study by W. T. Pfeffer Geophysical Consultants LLC revealed that that height of the moraine has not been affected. However, many more icebergs are simply floating over it.

The Coast Guard manages ice risk with 24-hour radar. Five of the escort tug boats dispatched to accompany tankers in and out of Valdez are equipped with radar that can detect ice.

"There are probably 50, 60 days per year when tanker traffic is in some way restricted based on ice hazards," Swanson said. That could mean operating in daylight only, one-way traffic or complete closure of the shipping lanes.