The Johnsons are worried about their land, which has been in the family for three generations. 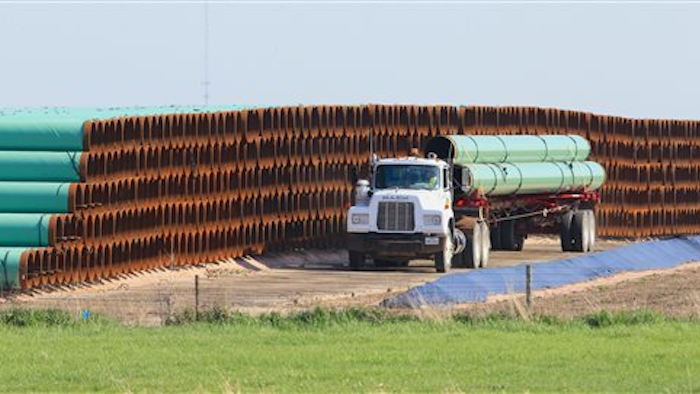 A Texas company that already has obtained shipping commitments from oil companies to build a 1,100-mile pipeline from western North Dakota to Illinois is having a tougher time getting permission from North Dakota landowners.

Chuck Frey, vice president of engineering for Dallas-based Energy Transfer Partners LP, told the state's Public Service Commission on Thursday that subsidiary Dakota Access LLC only has acquired 56 percent of the easements needed despite wanting to begin construction on the $3.8 billion project this year.

"Our goal is to reach voluntary agreement with all landowners," Frey told the three-member panel that oversees a slew of public interests, from pipelines to grain elevators. He said the company "would be forced to use the eminent domain process" if agreements can't be reached.

Zachary Pelham, a lawyer working for the Public Service Commission, said the panel has had complaints from some landowners that the company had used "strong-arm tactics" and "some even felt threatened" if they refused to sign off on easements.

Frey told the panel that he was aware of the allegations and that the company has established a toll-free telephone number to report any concerns.

North Dakota Pipeline Authority Director Justin Kringstad said the project, if approved, would be the largest-capacity pipeline for the state's crude to date — moving 450,000 barrels daily though South Dakota and Iowa to an existing pipeline in Patoka, Illinois, where shippers can access Midwest and Gulf Coast markets.

The company still needs to obtain federal and other states' permits but plans to have the pipeline in service late next year. Almost 360 miles of the pipeline would pass through North Dakota at a cost of about $1.4 billion, the company said. The steel pipeline will vary in diameter from 12 inches to 30 inches and would be buried at least 4 feet below ground.

The pipeline's path in North Dakota would cross beneath the Little Missouri River once and the Missouri River twice, near Williston and Mandan. The pipeline also would employ safeguards such as leak detection equipment; workers monitoring the pipeline remotely in Texas could close block valves on the pipeline within three minutes if a breach is detected, Frey said.

That's of little salve to Sherilyn and Grant Johnson, who run a farm and ranch near Almont, about 40 miles west of Bismarck. The couple told The Associated Press that they joined about 60 other landowners to negotiate and express concerns.

"It's not that we're dead set against it," Sherilyn Johnson said. "We just want some assurances."

The Johnsons said they worry about their land, which has been in their family for three generations.

"What will happen 50, 100, 150 years from now when the pipeline has fulfilled its purpose?" Sherilyn Johnson said. "This pipeline is going to be in the ground for the end of time."

Roger Kaseman told the AP that he and his wife, Lenore, signed a 99-year easement with the company worth "just under $50,000" for permission to place about a half-mile of pipeline on their farmland in south-central North Dakota. He said the company treated the couple professionally and fairly.

"We had a long list of questions concerning safety and liability and the impact on the land long-term," Kaseman said. "They answered every question in detail and to our satisfaction."