BNSF Railway Co. says it intends to buy a fleet of 5,000 strengthened tank cars to haul oil and ethanol in a move that would set a higher safety standard for a fleet that's seen multiple major accidents. The Texas-based subsidiary of Warren Buffet's Berkshire Hathaway, Inc. announced the voluntary step Thursday. 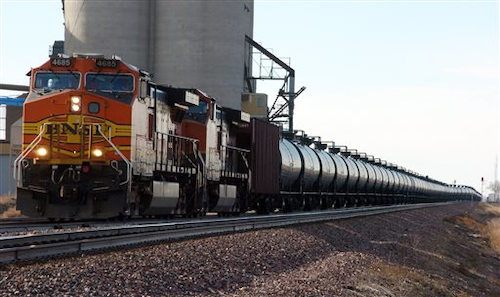 BILLINGS, Mont. (AP) -- BNSF Railway Co. says it intends to buy a fleet of 5,000 strengthened tank cars to haul oil and ethanol in a move that would set a higher safety standard for a fleet that's seen multiple major accidents.

Railroads are under pressure to prevent accidents after a string that included an oil train derailing in Quebec last July and killing 47 people.

Oil and ethanol shipments by rail have increased dramatically in recent years. Much of it is being hauled by an old fleet of some 78,000 tank cars that are prone to split during derailments.

BNSF says it does not want to wait for the government to finalize pending regulations on improved tank cars.