At the Iowa Renewable Fuels Association's annual meeting Tuesday in Altoona, the ethanol's chief Washington lobbyist noted that the industry is battle-hardened, having successful fought against oil interests to get the biofuel mandate, which currently requires that renewable fuels make up about 18 billion gallons of the nation's fuel supply. 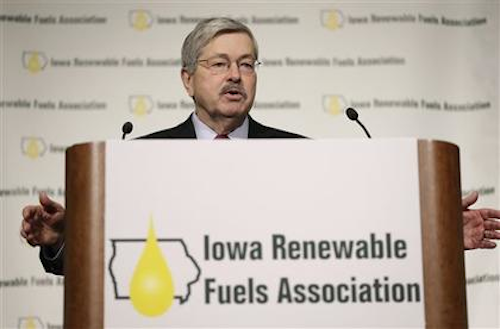 At the Iowa Renewable Fuels Association's annual meeting Tuesday in Altoona, the ethanol's chief Washington lobbyist noted that the industry is battle-hardened, having successful fought against oil interests to get the biofuel mandate, which currently requires that renewable fuels make up about 18 billion gallons of the nation's fuel supply.

"We're up against the richest companies in the history of the word. And they are irritated. They don't like the fact that a bunch of farmers from Iowa have taken 10 percent of their barrel, 10 percent of their market," said Bob Dinneen, president of the Renewable Fuels Association, a national ethanol and biodiesel industry trade group.

The Environmental Protection Agency announced in November plans to reduce this year by almost 3 billion gallons the amount of ethanol and other biofuels required by federal law to be mixed into gasoline. The agency has been gathering public comment for the proposed rule change. Tuesday was the final day for comments to be submitted.

The EPA said lower than expected demand for gasoline caused by more efficient engines and drivers cutting back figured in to its proposal. The agency said if it stuck to the volumes mandated by law, the amount of biofuel required would generate more ethanol than many engines can safely handle.

The petroleum industry is pushing hard for the change and would like the 2007 Renewable Fuel Standard law repealed.

"Our major concern is that ever-increasing biofuel mandates under the Renewable Fuel Standard could harm consumers and damage their automobiles while potentially creating supply shortages," said Carlton Carroll, a spokesman for the American Petroleum Institute, a Washington-based trade group. "A growing chorus of concerned groups is urging reform and repeal the before the mandate can put consumers in harm's way. This is not a battle of one industry against another. It's a battle against bad public policy."

The annual conference of Iowa ethanol manufacturers and supporters usually is an upbeat event focused on the past year's accomplishments and plans for new markets. But this year's meeting was sharply focused on the EPA proposal.

If the agency moves forward with the rule, Dinneen said, a lawsuit is likely.

"We will not shy away from defending this program to the bitter end," he said. "It's too important."

He was talking to a sympathetic audience.

Iowa, with 42 refineries, leads the nation in ethanol production, making about 30 percent of the U.S. supply. It is mostly made from corn, for which Iowa is also the leading U.S. producer. The state also is the top biodiesel manufacturer with 12 factories that make the fuel additive largely from soybeans, another leading crop for the state. Iowa's governor, Terry Branstad, also has been working to convince the EPA to reverse course.

"We must stand together and promote this homegrown fuel. We must continue to fight against our country's addiction to foreign oil. We paid a deep price for that in dollars and lives," he said.

Branstad said ethanol has provided a market for corn that boosts farm incomes and supports more than 40,000 jobs in the state. He credited it with driving record enrollment in agriculture programs at Iowa State University.

"Our kids are coming back to the farm in rural communities because there are jobs and opportunity and they can see a career there," he said. "We do not need to see that all taken away from us."

Others at the conference discussed bright spots for the industry, including growing export markets. Last month, China for the first time accepted U.S. ethanol for import, Dinneen said.