Tomblin, the Democratic governor, urged passage of a chemical storage regulatory program. The bill aims to address shortcomings that allowed 7,500 gallons of coal-cleaning chemicals to seep into the Elk River on Jan. 9. Freedom Industries, which owned the plant that leaked the chemicals, filed for Chapter 11 bankruptcy Friday. 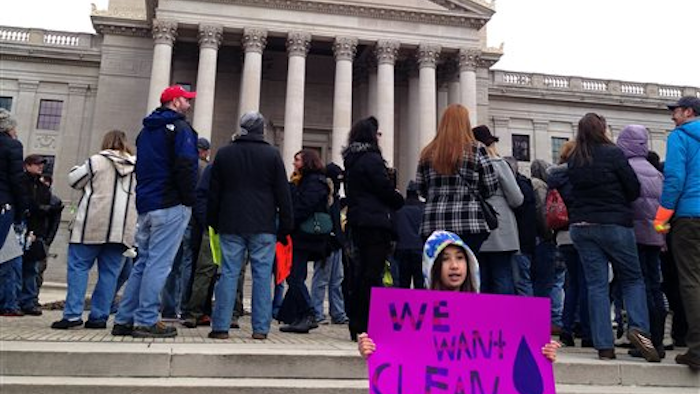 Tomblin, the Democratic governor, urged passage of a chemical storage regulatory program. The bill aims to address shortcomings that allowed 7,500 gallons of coal-cleaning chemicals to seep into the Elk River on Jan. 9. Freedom Industries, which owned the plant that leaked the chemicals, filed for Chapter 11 bankruptcy Friday.

Freedom Industries' safety flaws, including a last-resort containment wall filled with cracks, went largely undetected, because as a facility that neither manufactured chemicals, produced emissions, or stored chemicals underground, it was not subject to environmental regulations, state Department of Environmental Protection officials have said. The chemical that spilled also wasn't deemed hazardous enough for additional regulation.

The material flowed 1.5 miles downstream and made it into West Virginia American Water Company's water supply.

Below-ground tanks storing chemicals face environmental regulations, but ones above the surface fall into a regulatory loophole, officials have said. The department made several routine visits to the Charleston site between 2002 and 2012, but found no violations.

The governor's bill, which hasn't been filed yet, would mandate annual inspections of above-ground chemical tanks, and would require water systems serving the public to draft emergency plans in case of spills.

Storage facilities would self-report locations, construction and maintenance of tanks, and file annual reports. They would need to detail their spill-prevention mechanisms, and would be subject to penalties from the Department of Environmental Protection if they don't comply.

"This proposed legislation will ensure that all above-ground storage facilities are built and maintained consistent with required safety standards," Tomblin said.

Manchin, D-W.Va., wants the federal government to set standards for state-run regulatory efforts. His proposal would require states to inspect chemical facilities that could threaten a public water system every three years. Others would be inspected every five years. States could recoup costs from responding to emergencies. The bill is also supported by U.S. Sens. Jay Rockefeller, D-W.Va., and Barbara Boxer, D-Calif.

The Centers for Disease Control and Prevention has acknowledged that scarce information was available about the chemical that spilled, crude MCHM, when officials established a safe level for people to start drinking the water again.

But a "toxic" atmosphere in Washington, D.C., has prevented environmentalists and the chemical industry from finding middle ground on additional regulation, Manchin said.

On Jan. 14, U.S. House Speaker John Boehner responded to a reporter's question about the spill, saying there are enough regulations already. He chided President Barack Obama, claiming his administration ought to be "actually doing their jobs."

"I am entirely confident that there are ample regulations already on the books to protect the health and safety of the American people," Boehner said.

Manchin said Boehner made the statement "very quickly after (the spill) had happened," before the speaker knew about the lack of regulation for above-ground storage tanks. Manchin said he's going to speak with Boehner about his bill.

"I think that John (Boehner) would be responsive once he sees what we are doing," Manchin said.

Freedom Industries has a bankruptcy court hearing scheduled Tuesday afternoon in Charleston. Its bankruptcy status temporarily shields the company from dozens of lawsuits, many by businesses that were shuttered for days under a water-use ban.

The company is requesting permission to take out up to $5 million in credit from WV Funding LLC. That company, which was founded Friday, links back to J. Clifford Forrest through a second corporation started Friday.

Forrest is in charge of a company named Rosebud Mining, based at the same Pittsburgh office where Freedom Industries' parent company, Chemstream Holdings LLC, is listed in corporate records.

Forrest has largely signed campaign checks for Republicans, but he has supported Democrats. He gave two $500 donations to Tomblin's 2012 gubernatorial run. Forrest also signed a $30,800 check for the Republican National Committee in 2012, and has given multiple $50,000-plus donations to Republican committees in Pennsylvania.