Texas' oil and gas regulator has opened a new investigation into allegations that methane is contaminating North Texas water after residents complained that independent sampling by university researchers revealed high levels of the explosive gas in their residential wells, the state agency and scientists said. 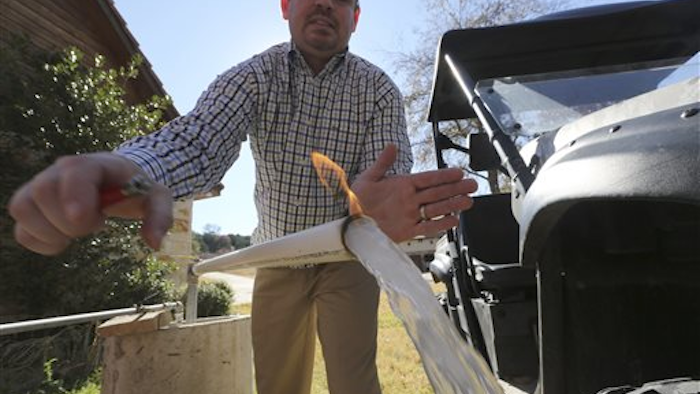 HOUSTON (AP) -- Texas' oil and gas regulator has opened a new investigation into allegations that methane is contaminating North Texas water after residents complained that independent sampling by university researchers revealed high levels of the explosive gas in their residential wells, the state agency and scientists said.

Further analysis by another independent scientist, Geoffrey Thyne, of testing done by the U.S. Environmental Protection Agency and natural gas company Range Resources indicates the contamination is spreading to more wells and the levels are increasing in some cases. Thyne said his preliminary analysis strengthens his belief that the contamination originates at wells drilled by Fort Worth-based Range.

"The leak continues and it's spreading," Thyne told The Associated Press. "I can say, based on the current data, there are at least two other wells that show the same source ... which is the Range well."

The Texas Railroad Commission, the state agency that oversees oil and gas drilling, opened its new investigation in August, spokeswoman Ramona Nye said in an email. Additional information will be released when the investigation is complete, possibly in February, she said.

Range Resources has no evidence the gas in the water and the gas it is producing is the same, company spokesman Matt Pitzarella said in an email. The gas in the water is naturally occurring, as sometimes happens. Range's tests do not find dangerous levels of methane in the water, but the company encourages all homeowners to vent their wells.

However, Thyne and Duke University scientist Rob Jackson say they have seen dangerous levels of methane. The findings are likely different because the oil and gas industry typically uses a different sampling method, Thyne said.

Thyne's study includes isotopic analysis. This fingerprint-type analysis allowed him to review the unique chemical makeup of the gas found in the water wells and compare it to the gas Range Resources is producing and methane in a rock formation called the Strawn, which is where Range says the gas contaminating the water originated.

Thyne had already reviewed some data for the EPA after it opened its investigation in 2010, but in recent months he did a more thorough analysis. Now, after a preliminary review, Thyne said he is more convinced the gas in at least three of the water wells originates in the Barnett shale — the rock layer from which Range Resources is extracting gas — and is identical to what is found in the company's well bore.

At first glance, it may appear that the gas in the Strawn and Barnett layers are indistinguishable "but in fact, people are able to notice subtle differences," Thyne said.

The case began in 2010 when homeowner Steve Lipsky, who lives in an upscale subdivision in Weatherford about 60 miles west of Dallas, complained to the Railroad Commission that his water was bubbling.

The agency found methane in Lipsky's water. Lipsky, afraid his family could be in danger and that the Railroad Commission was not working fast enough, contacted the EPA. Methane can be explosive if it builds up in a confined space and has an ignition source.

The EPA ruled the gas in Lipsky's water was likely coming from Range Resources' well site in a wooded area about a mile from the family's home. The company used hydraulic fracturing or "fracking" — a method of pumping millions of gallons of chemical-laced water into the ground to break up hard rock — to drill the two wells that were later sold to Legend Natural Gas.

The EPA issued a rare emergency order in late 2010 demanding that Range Resources resolve the problem and supply Lipsky's family with water. But in March 2011 the Railroad Commission ruled Range Resources was not to blame. Range agreed, and refused to comply with the EPA's order, which landed the company in court.

Range settled in March 2012 and the EPA withdrew its order. The company agreed to conduct testing for a year.

Later, at the insistence of Republican congressmen who accused the EPA of needlessly going after the gas driller, the agency conducted an internal review. That investigation sided with the EPA's initial actions, and the Office of Inspector General in a report released Dec. 24 asked for additional measures to ensure there is no risk.

Jackson, the Duke University professor, also specializes in isotopic analysis. He declined to share his study — funded by Duke and the National Science Foundation — until it is peer-reviewed and published, but some homeowners shared test results with the AP.

Jackson found higher levels of methane in some water wells — sometimes five to 10 times higher — than what Range Resources' tests showed. In some cases, the levels are five times higher than the 10 parts per million per liter set as a threshold limit by the U.S. Geological Survey.

"We're seeing high methane concentrations and that result alone indicates to me that EPA closing the case was premature," Jackson told the AP.

Range Resources declined to comment on Jackson's findings, saying he has not shared the results.

Elizabeth Struhs, whose property abuts Lipsky's, fears her family is in danger. Jackson's samples found 17 parts per million of methane per liter of water in her well, while Range Resources said its tests did not detect any hazardous methane level.

"We had good water before they came here and we should have good water now," Struhs said.