Army Plan For OR Ex-Chemical Site May Include Price Tag

Economic development leaders in Eastern Oregon who thought the U.S. Army would give them, at no charge, thousands of acres where weapons such as nerve and mustard gas once were stored now say the Pentagon is telling them to think again. Instead of turning over the site of the Umatilla Chemical... 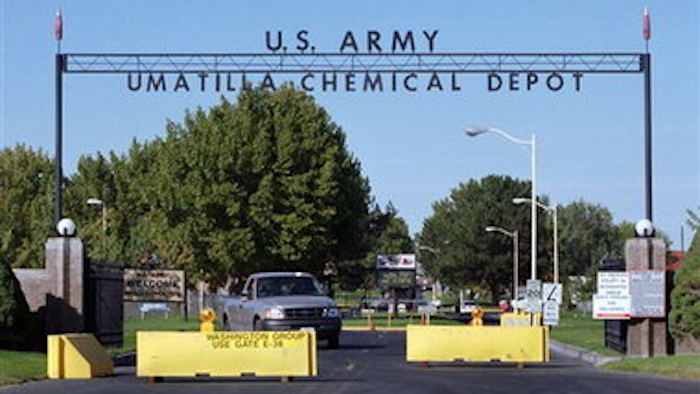 Economic development leaders in Eastern Oregon who thought the U.S. Army would give them, at no charge, thousands of acres where weapons such as nerve and mustard gas once were stored now say the Pentagon is telling them to think again.

Instead of turning over the site of the Umatilla Chemical Depot for free, the Army is considering how to bring in revenue from the disposition of the property, said Don Chance, project manager for the Columbia Development Authority.

The authority was set up by two northeast Oregon counties, two port authorities along the Columbia River and the Umatilla tribe, the East Oregonian newspaper reported .

It's been working on an application for what's called an Economic Development Conveyance, with the understanding the Army would dispose of the property without recompense.

The authority plans to turn over some land to the Oregon National Guard for a training facility, make some into a wildlife preserve, and sell or lease the rest for industrial and agricultural use.

Chance said the Army officials he's been dealing with told him late last year that their superiors have changed their minds, citing the expense of demolishing asbestos-laced buildings.

"They're being pressured to squeeze every dollar out of base closures," Chance said.

None of the Army officials involved have been publicly identified, and it's unclear if the Army is thinking of selling the land on the market.

In response to questions from The Associated Press, spokesman Dave Foster issued a statement that said the Army has made no decisions on the "most appropriate way to convey the property."

Chance said the authority is eager to get the land on the tax rolls. But, he said, the authority lacks money to buy the property, its members are unlikely to be interested in a profit-sharing agreement with the military, and if the Army wants revenue, it probably will have to sell the property in pieces.

In 2011, a defense contractor finished incinerating the depot's store of chemical weapons, as required by a 20th century treaty.

The land was cleared in preparation for a return to civilian uses. The military began acquiring land there in 1940, just before the start of World War II.

Two years ago, the state's congressional delegation took a hand in the disposition of the 31-square-mile tract, inserting a provision in a defense appropriations bill that said it must be transferred under a process spelled out by a base-closing commission and allowing transfers to local governments.

Chance told the authority's members this week that negotiations are underway, so it's too soon to "be political" and enlist the help of Republican Rep. Greg Walden, who represents Eastern Oregon, or the state's two Democratic U.S. senators, Jeff Merkley and Ron Wyden.

But through their media officers or in statements, all three said they would press the community's case.

Walden spokesman Andrew Malcolm said, for example, that "Greg will do all he can to help get this fixed and ensure the Pentagon honors its commitments to the community."