Oil Plunge Is Either Threat Or Boon To Global Economies

A renewed plunge in oil prices is a worrying sign of weakness in the global economy that could shake governments dependent on oil revenues. Yet it is also a bonus for consumers as prices fall at the pump, giving individuals more spending money and lowering costs for many... 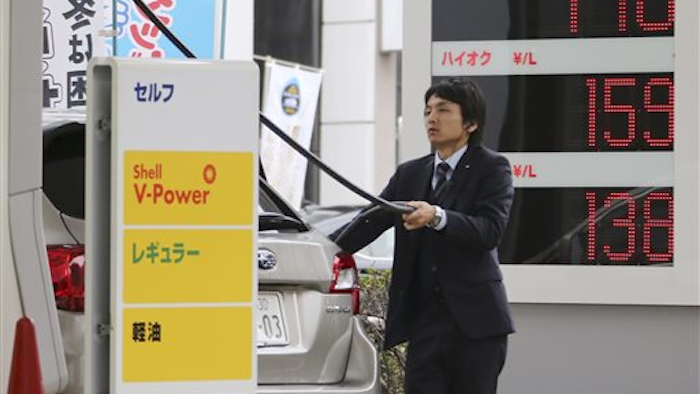 A renewed plunge in oil prices is a worrying sign of weakness in the global economy that could shake governments dependent on oil revenues. Yet it is also a bonus for consumers as prices fall at the pump, giving individuals more spending money and lowering costs for many businesses.

The latest slide follows OPEC's decision to leave its production target at 30 million barrels a day. Member nations of the cartel are worried they'll lose market share if they lower production.

Partly because of the shale oil boom in the U.S., the world is awash in oil at a time when demand from major economies is weak — so prices are falling. Citibank analysts wrote in a report Thursday that global supplies exceed demand by about 700,000 barrels a day now.

Tom Kloza, chief oil analyst at the Oil Price Information Service, expects the price to fall by another $5 or $10 a barrel before stopping. "It's that kind of rout," he said.

Overall, the slide is a boon for consumers in oil-importing regions like Asia, Europe and North America. But there are also some possible negatives.

The U.S. economy will receive an outsized benefit from lower oil prices because the U.S. is the world's largest oil consumer.

U.S. consumers have been surprised and delighted at the lowest gasoline prices since 2010. Drivers in some low-cost states such as South Carolina, Missouri, Oklahoma and Texas could see prices below $2, according to Kloza.

The U.S. national average was $2.79 on Friday. Kloza expects gas to eventually be a full $1 per gallon below its June peak of about $3.70 a gallon. That would save typical households $60 a month for those that burn 60 gallons of fuel.

"It's a nice easy, calculation," Kloza says. "These are numbers that we would have regarded three or four months ago as something from the lunatic fringe."

Canadian consumers are also catching a break. In some regions, such as southern Ontario, gasoline could fall below the important psychological barrier of $1 per liter.

The oil companies propelling a production boom in Canada and the U.S. won't be so happy. Crude produced in Canadian oil sands, deep offshore in the Gulf of Mexico and in some U.S. onshore shale formations is some of the most expensive oil to produce in the world.

Drillers will have to cut back at least some activity. Forcing this kind of slowdown may have been part of OPEC's motivation for declining to cut its own production.

Many of Europe's economies are net importers of oil, so lower prices are likely to give a welcome, if small, boost to growth. Cheaper energy reduces costs for industry and puts more money in consumers' pockets. That will be particularly useful in the 18-nation eurozone, where unemployment is high.

Declining fuel prices also, however, add to one of the eurozone's biggest headaches: low inflation. Weak inflation makes it harder for troubled economies like Greece to reduce debt. It is also a problem for the European Central Bank, which wants to boost inflation from just 0.3 percent currently to around 2 percent.

The few European producing countries — mainly Britain and Norway in the North Sea — face a drop in revenues that could balance out the positives of cheaper fuel.

Russia gets about 50 percent of its state revenue from oil exports, so the government's concerns are clear. The national economy is already sliding into recession under the impact of Western sanctions and investors are pulling money out.

For Russian consumers, the outlook is mixed. Prices at the pump have actually gone up because a drop in the national currency, the ruble, has increased inflation. In local money, 95-octane gasoline costs 35.99 rubles a liter ($2.8 a gallon) in Moscow, up from 35.53 per liter two months ago.

Venezuela pushed for an OPEC cut because it badly needs high oil prices to fund its government. The country's oil production has been steadily declining for years so the combination of lower output and lower prices is already squeezing the nation's finances.

Venezuelan drivers won't immediately see a difference in price, though, because gasoline is heavily subsidized. Drivers there pay the equivalent of 5 cents a gallon.

In Japan, which is a net importer of oil, cheaper crude prices have been slow to filter down to consumers. Also, a recent drop in the yen's value will reduce the savings Japan can reap from lower oil prices.

In June, regular gasoline cost $1.40 a liter ($5.29 a gallon) at the Esso filling station in Shimbashi, near the glittering Ginza shopping strip in Tokyo. The price was $1.44 a liter ($5.44 a gallon) on Friday morning.

Prices are expected to fall but that will complicate the government's efforts to end Japan's deflation.

The Chinese government adjusts retail prices in line with the global market. As a result, Beijing has cut prices repeatedly this year. On Friday, the highest grade gasoline cost $1.20 a liter ($4.54 a gallon) in the capital, down from $1.35 a liter ($5.11 a gallon) in June. Cheaper fuel would ease financial pressure on manufacturers and small businesses. China's economic growth has declined steadily over the past two years.

Elsewhere in Asia, the impact is varied. In Indonesia, fuel costs have risen because the government has cut subsidies, more than offsetting the decline in global oil prices. The higher prices triggered street protests, so the latest fall in crude prices may help ease tensions.

Malaysia is among the few oil-exporting nations in Asia, so the drop is hurting its coffers. But it is also cutting expensive fuel subsidies.