An energy company has resumed production at an ethanol plant in Indiana along the Ohio River that was shut down more than two years ago by its previous owner. Valero Renewable Fuels said the plant ... 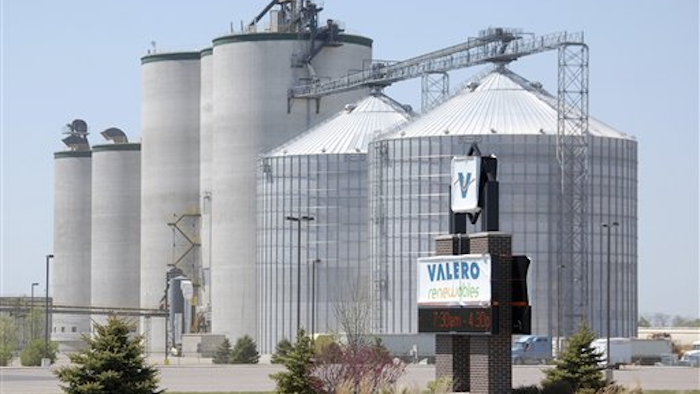 An energy company has resumed production at an ethanol plant in Indiana along the Ohio River that was shut down more than two years ago by its previous owner.

Valero Renewable Fuels said the plant at the Port of Indiana-Mount Vernon was operating with about 65 employees, the Evansville Courier & Press reported.

Local and state officials took part in an event this week marking the resumption of operations at the plant 20 miles west of Evansville that was closed due to a decline in the ethanol market in 2012. Company officials cited the plant's access to corn suppliers as well as strong rail, truck and barge transportation.

"Valero's team recognized there are considerable strategic advantages for the production and distribution of ethanol at an Ohio River port," Ports of Indiana CEO Rich Cooper said. "Valero's investment into this facility creates significant economic impacts in southwest Indiana and throughout our state."

Valero now has 11 ethanol plants in seven states, including one in Linden, Indiana, about 40 miles northwest of Indianapolis.

Aventine started building the ethanol plant in late 2007 but halted construction in 2009 when it filed for Chapter 11 bankruptcy. Aventine emerged from bankruptcy and resumed construction in March 2010 and the plant began producing ethanol in December 2010 with an annual production capacity of 110 million gallons.

The Indiana Economic Development Corp. offered Valero up to $600,000 in tax credits based on its hiring plans.

"Not only is Valero developing a partnership with the Ports of Indiana on this project, but the company is also making a significant commitment to support Mount Vernon and the entire southwest Indiana community," Lt. Gov. Sue Ellspermann said.

Its prefabricated concrete blocks are topped with a thin transparent layer that allows sunlight to hit solar cells.
Jul 15th, 2021
Follow Us
Most Recent