Fee Proposed On Rail Cars That Haul Oil, Other Flammables

U.S. senators from six states on Thursday proposed that the government charge companies a special fee to ship oil, ethanol and other flammable liquids in older railroad tank cars that have been involved in fiery explosions. 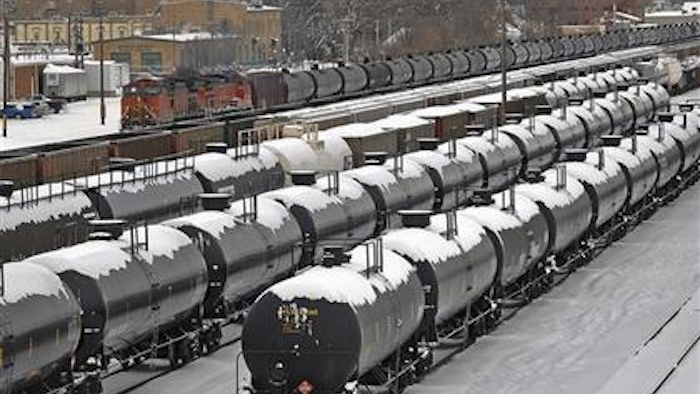 U.S. senators from six states on Thursday proposed that the government charge companies a special fee to ship oil, ethanol and other flammable liquids in older railroad tank cars that have been involved in fiery explosions.

The fee would start at $175 and increase to $1,400 per car by 2018. It would raise an estimated $600 million to train first responders, clean up spills and relocate rail tracks around populated areas.

The proposal would be paired with tax breaks for upgrades to newer tank cars, so they can better withstand derailments. Democratic Sen. Ron Wyden of Oregon told The Associated Press the intent is to offer "market-based" incentives for companies to improve safety.

"The idea is to speed up the phase-out of older tank cars," Wyden said. He added it "allows us to move in a much faster and more aggressive fashion to make oil by rail transportation safer."

On Friday, U.S. Transportation Secretary Anthony Foxx and Canada's Minister of Transport Lisa Raitt are set to announce new rules calling for flammable liquid tank cars to be retrofitted or replaced. The rules could affect up to 155,000 tank cars in the U.S.

But industry representatives have said it could take more than a decade to get that work done — far longer than safety officials want.

Rail shipments of oil and ethanol soared over the past decade following huge increases in domestic production, and the trains now pass regularly through hundreds of cities and towns. Each tank car carries roughly 30,000 gallons of fuel.

Accidents involving older tank cars, known as DOT-111s, include 47 people killed when a train carrying North Dakota crude crashed in the town of Lac-Magantic, Quebec, and one person killed during a 2009 ethanol train derailment in Rockford, Illinois.

Tank cars often are owned not by railroads but by the companies that produce oil, ethanol and other fuels moved by rail. There are roughly 55,000 older DOT-111s that would be subject to the fee.

The tax breaks would cover 15 percent of the expense to upgrade cars constructed since 2011. Those cars were built under a voluntary industry standard that was meant to improve safety. Yet since February, at least 28 of the newer cars have been involved in four oil train derailments that sparked major fires in Illinois, West Virginia and twice in Ontario, according to federal safety officials.

BNSF Railway has imposed a $1,000 fee on older tank cars used to carry crude, according to court documents in a lawsuit from fuel and chemical refiners who contended the surcharge is illegal.

Diana Cronan with the American Fuel and Petrochemical Manufacturers said her group was reviewing the fee proposal offered Thursday.

A railroad representative said the industry backs the senators' push for more robust tank cars "as quickly as possible."

"It has been the freight railroads position for a number of years that we need stronger tank cars to advance the safety of crude transportation," said Ed Greenberg with the Association of American Railroads.