The U.S. Court of Appeals for the D.C. Circuit hears arguments Thursday in two cases challenging the Environmental Protection Agency's ambitious proposal to slash carbon pollution from the nation's coal-fired power plants that is blamed for global warming. 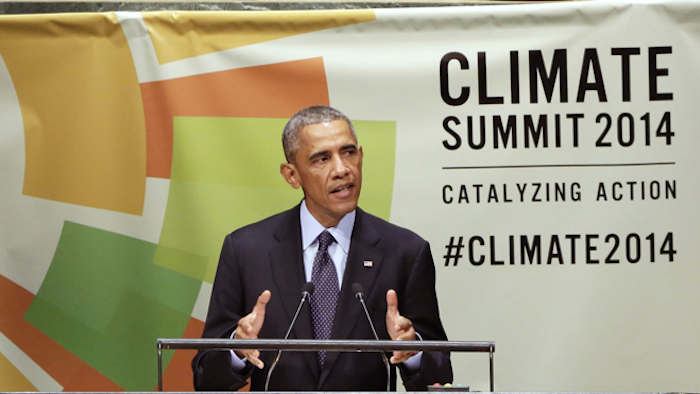 The centerpiece of the Obama administration's effort to tackle climate change is facing a high-profile legal test as a federal appeals court considers a plan that has triggered furious opposition from Republicans, industry figures and coal-reliant states.

The U.S. Court of Appeals for the D.C. Circuit hears arguments Thursday in two cases challenging the Environmental Protection Agency's ambitious proposal to slash carbon pollution from the nation's coal-fired power plants that is blamed for global warming.

The lawsuits — one from a coalition of 15 states and another brought by Murray Energy Corp., the nation's largest privately held coal mining company — are part of a growing political attack from opponents who say the move is illegal and will kill jobs, cripple demand for coal and drive up electricity prices.

The rule proposed by the Environmental Protection Agency last year requires states to cut carbon emissions by 30 percent by 2030. It gives customized targets to each state, leaving it up to them to draw up plans to meet the targets.

But a backlash has been building. Last month, Senate Majority Leader Mitch McConnell, a Republican, sent a letter urging the governors of all 50 states to defy the EPA by refusing to submit the compliance plans.

At issue before the court is whether the EPA has legal authority for its plan under the Clean Air Act. The agency and environmental advocacy groups have urged the court to throw the cases out as premature, since the agency won't issue a final rule until this summer.

David Doniger, director of the Natural Resources Defense Council's climate and clean air program, called the lawsuits a ploy "to dress up the political attacks being led by Mitch McConnell in the Senate and others in the House."

But Murray Energy and the states say the court should issue a rare "extraordinary writ" to stop the EPA from taking action beyond its power even before the rule becomes final. "The stakes are so high, and delay will waste enormous amounts of industry, state, and federal resources and result in increased coal fired power plant retirements that cannot be later remedied," the company said in court documents.

West Virginia and other states argue that the plan is illegal because coal-fired power plants already are regulated under a separate section of the Clean Air Act. They say the law prohibits "double regulation."

The legal debate focuses on dueling provisions added by the House and Senate to the Clean Air Act in 1990. Instead of trying to reach a compromise, Congress included both.

The rule's opponents want EPA to abide by the House language, which says if an industry is already regulated under one section of the law, it can't be regulated under a different part.

The EPA prefers the Senate version, arguing that the agency is only barred from regulating pollutants covered by another section. In this case, the agency says, the law allows it to regulate carbon dioxide, which is not already regulated under a different part of the law. Courts typically defer to an agency's interpretation when the law is ambiguous.

Tribe, the Harvard professor, also is getting a few minutes of time before the court Thursday to argue that the proposal also infringes on the right of states and the role of Congress in violation of the U.S. Constitution.

All three judges on the panel hearing the case were appointed by Republican presidents.