New Technology Cleans Fracking Wastewater And Converts It Into Energy

Researchers from the University of Colorado have developed technology they say could cleanse wastewater from oil and natural gas drilling sites while simultaneously generating additional energy. Critics of the recent boom in hydraulic fracturing operations in the U.S. raised concerns... 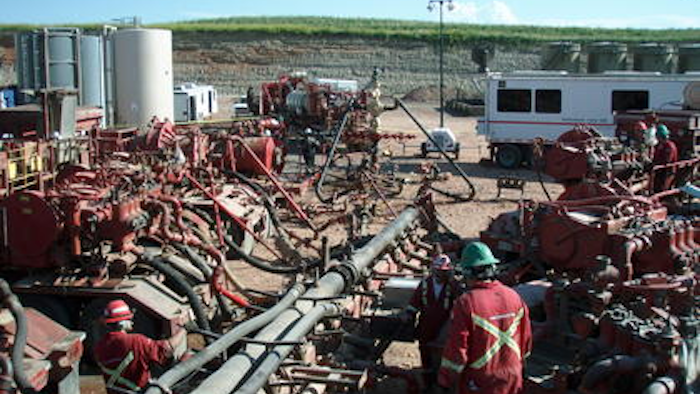 Critics of the recent boom in hydraulic fracturing operations in the U.S. raised concerns environmental concerns from oil spills to small earthquakes, but wastewater discharged from those sites could also have harmful effects.

The substance, called brine, contains high levels of salt and toxic organic compounds that could impact local water supplies if not properly contained. Earlier this year, for example, nearly 3 million gallons of brine leaked from a North Dakota pipeline and contaminated two nearby creeks.

Their system enables microbes to feed on the organic contaminants in brine as they generate an electrical current. The system then operates essentially as a battery, with current extracting dissolved salt from the water.

Researchers also said the system's surplus energy could be used to run other equipment at drilling sites.

"Right now oil and gas companies have to spend energy to treat the wastewater," said report co-author Zhiyong Jason Ren. "We are able to treat it without energy consumption; rather we extract energy out of it."

Scientists said the technology could enable oil producers to treat and recycle water for additional use in drilling. Fracking uses a combination of chemicals, sand and water to blast through shale rock and extract crude oil, and its use of water has sparked concerns at sites in the arid Western U.S.

Ren and researcher Casey Forrestal formed a startup company called BioElectric Inc. in an effort to scale up production of the system and compete with current drilling decontamination costs.