Every morning as principal Brad Foss arrives at his school — after just a 60-second commute — he's reminded of oil's giant footprint in this town. There's the revolving-door student roster that reads like random pages of a school atlas: Jiang from China, Emma from Utah, Jose from Guatemala, Omar from Arizona... 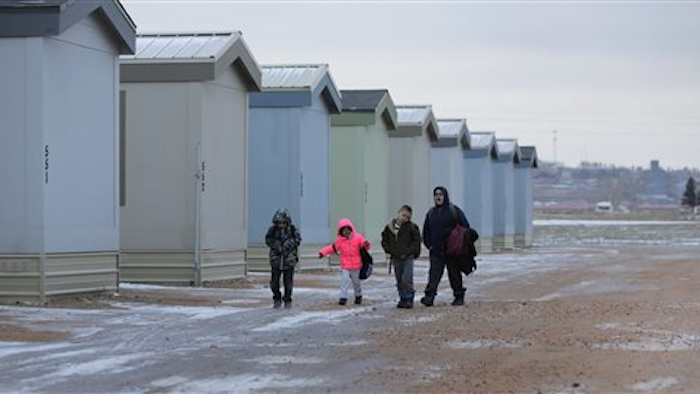 Every morning as principal Brad Foss arrives at his school — after just a 60-second commute — he's reminded of oil's giant footprint in this town.

There's the revolving-door student roster that reads like random pages of a school atlas: Jiang from China, Emma from Utah, Jose from Guatemala, Omar from Arizona.

There are the teachers, many of them transplants, including a dedicated Kurdish refugee who's helping dozens of students learn English, a job that would never have existed until now.

And there are rows of white trailers, temporary homes for several teachers — and for Foss, who's just a minute's walk from his office.

Like the rest of this town, Watford Elementary School has been transformed by the oil boom.

Families with young kids are constantly moving in, undeterred by the recent plunge in oil prices. The 700-plus enrollment is more than double that of 2011. Many newcomers are the offspring of riggers, welders, truck drivers, engineers and others lured from across America — and around the world — by the prospect of good jobs. Their arrival has brought diversity to a school that until recently had virtually none.

"We have a world community within our own little school," boasts Foss. "The kids here can bring the globe to life, and that's kind of cool."

Watford Elementary draws on a school district that spans 1,679 square miles, larger than Rhode Island. No longer a shrinking schoolhouse on the prairie, it's a bustling, ever-expanding melting pot. Since 2011, kids from all 50 states and more than 20 countries, including Yemen, Egypt, Pakistan, Mexico and China, have attended school here.

"A community that has been basically stable and white-bread now has every religion, every race, every cultural niche represented," says Gene Veeder, McKenzie County economic development director. "It's surprising how quickly it has become the new normal."

That 'normal,' though, comes with new strains and growing pains at the school. On any given day, teachers might find themselves hunting up warm clothes for a child arriving from the South or helping the family of another student whose trailer has frozen water pipes. No one could have imagined any of this before the stampede to oil country.

Enrollment has increased so quickly that sixth graders were moved to the high school to make extra room. That building will be converted into a middle school next year, when a new $50 million high school is set to open.

The town's population has exploded at the same frantic pace, pushing up housing costs well beyond many educators' paychecks. (A two-bedroom apartment can go for $2,000-$2,500 a month.) Some teachers live in rent-subsidized apartments or 800-square-foot trailers until they find permanent homes.

Foss will soon be leaving his trailer for a 2,000-square-foot home. "I feel like I've been camping for three years," he says.

Despite declining oil prices, new students are still arriving. Many folks here note that Watford City is in the heart of the most profitable oil-producing area of the Bakken.

That prosperity has been a magnet for many newer teachers.

Melissa Rohrman, a first-grade teacher, traded the lush greenery of Fort Myers, Florida, for the ice-covered prairie so her husband could eventually start an electrical business. "I felt like I was coming to the Gold Rush," she says.

Iva Dees, a 31-year teaching veteran, left French Camp, Mississippi, when opportunity came knocking. Her husband is making more money here driving a water truck than he did in his job hauling logs in the South. Dees jokes that "a lot of the teachers are as displaced as I am." But, she adds, "We are beginning to blend."

The students are doing the same, but it isn't easy because of constant turnover.

"It's hard when you put in all the time and effort to educate these kids and three months down the road they're gone," Foss says. "You just hope you've made progress, but you don't know."

Some kids leave when their parents are transferred to out-of-state oilfield jobs, others when a family's dreams of the good life in the oil patch don't pan out. Some kids who do remain struggle after being uprooted from friends. Living conditions can make the adjustment harder if they end up in a crowded trailer with no privacy or place to study.

School counselor Alex Veeder, who attended the school as a girl, works to smooth the bumpy transitions, noting, "Some of these kids have seen more than I have my entire life ... and they're only in first grade."

Watford Elementary tries to ease the way for new families, offering its showers and laundry room for those without ready access to them in trailer parks. It also provides food package on Fridays for needy students.

School officials emphasize the local housing shortage is a major hardship for families. Foss says about 40 percent of the students are living in trailers or other arrangements considered temporary, which a federal law defines as "homeless."

Perhaps no one knows more about starting over than Selam Ahmed, a Kurdish refugee who teaches English to students who speak another primary language, most often Spanish.

Ahmed sees his own story as an inspiration: His family lost everything when they fled their homeland in northern Iraq during the Gulf War. He arrived in North Dakota as an 11- year-old with didn't speak English. Now he's teaching it to a new generation.

"I want to be a role model," he says. "I want them to see they're not the only ones going through hard times, leaving behind family members, friends, homes. It's not the end of the world. We make the best of it, then we move forward. ... It doesn't matter if you have a mansion or if you have a trailer. It all depends on how you motivate yourself."