From the time coal is scooped from the depths of the Spring Creek strip mine in Montana's wide-open Powder River Basin until it travels more than 6,000 miles across the Pacific Ocean to power plants in South Korea, the price can increase more than fivefold. 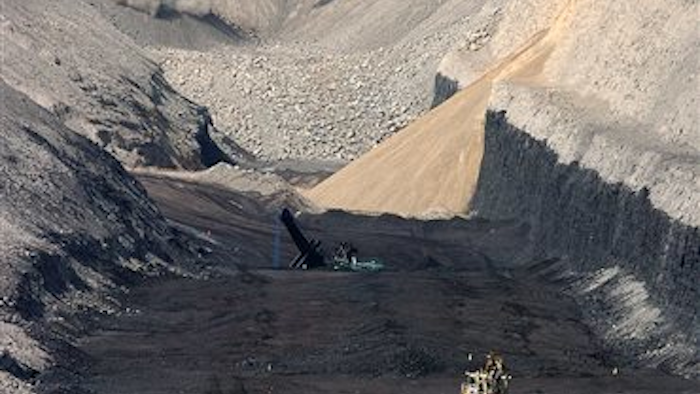 DECKER, Mont. (AP) -- From the time coal is scooped from the depths of the Spring Creek strip mine in Montana's wide-open Powder River Basin until it travels more than 6,000 miles across the Pacific Ocean to power plants in South Korea, the price can increase more than fivefold.

Mining companies, however, are only paying government royalties on the price of the coal when it is mined from federal lands, not when it is sold for more overseas, saving them millions of dollars in the process.

As the Interior Department investigates the industry's export practices and considers a new royalty system, several exporters in the Montana-Wyoming coal region — the nation's most productive — are planning to increase shipments abroad to energy-hungry Asia.

Whatever the department decides on royalties, a matter currently under internal review, the results have the potential to cut into profits at a time when the industry is looking to foreign markets to offset some of the daunting challenges it faces at home.

Proposed ports on the West Coast have the potential to increase U.S. coal exports by 60 to 100 million tons a year, said Jim Rollyson, an energy analyst with the advisory firm Raymond James.

"The international export market is where long-term growth for the industry might come from," Rollyson said. "If you're the government, that's real money you're trying to get there."

Federal officials forecast that 175 coal-burning power plant units will be shuttered in the next five years, equal to 8.5 percent of the total electricity produced by coal, largely because of competition from cheap natural gas and costs of complying with new environmental regulations.

Overseas markets, by contrast, have been booming.

While analysts expect demand to slip temporarily this year, 2012 saw a record 125 million tons of coal exported from the U.S. Some in the industry project that figure could double in just the next five years if new ports and port expansions are built in Washington state, Oregon and the Gulf Coast.

Federal officials declined to say what they've uncovered since the royalties investigation was announced in February. But they've said the probe will continue under the leadership of recently confirmed Interior Secretary Sally Jewell.

"We take this issue very seriously and remain fully committed to collecting every dollar due," said Patrick Etchart with Interior's Office of Natural Resource Revenue.

Among the major coal producers from federal lands in the West, Peabody Energy and Spring Creek owner Cloud Peak Energy have denied any wrongdoing, while Arch Coal, Inc., has declined to comment.

They've warned taxpayers could lose many millions of dollars annually if royalties are unfairly calculated. "Taxpayers deserve to know if Interior's oversight and regulations have kept up" with the rise in exports, said Wyden spokesman Keith Chu.

Royalties currently are paid based on the mine price of coal — about $10.55 a ton in the Powder River Basin, kept low by the volume of coal produced by mines such as Spring Creek, which boasts an 80-foot thick seam of the fuel that extends for miles beneath the surrounding landscape of gently rolling hills dotted with patches of pine.

By the time it hits the export market, that same ton of coal can be sold for $60 or more.

New filings with securities regulators for the first time shed light on the profitability of Cloud Peak's exports — what the company refers to as its "logistics business."

In the past, that business was lumped in with the company's domestic mining operations. It's now been broken out to capture the transportation costs incurred by an affiliate within the company that "buys" coal from the mine and arranges to deliver it from Montana to overseas customers.

The securities filings showed the company earned just over $60 million over the last two years off logistics, most of that from exported coal. Logistics accounted for about 22 percent of the Cloud Peak's 2012 total revenue of $1.5 billion. That portion of the company's profits fall outside royalty calculations.

And rightfully so, argue Cloud Peak executives, who say the export market carries far more risk than domestic sales, and the separate line of business shipping through West Coast ports should be excluded from royalties. In 2013, for example, the company said low coal prices could sharply drive down its export earnings. Even if it doesn't move as much coal, the company says it's still obligated under rail and port contracts to pay for shipping.

"We're taking some risk that the good years will outnumber the bad years, but there's no guarantee on that," said Cloud Peak Vice President Jim Orchard.

The company adds that its domestic operations remain more profitable, with a profit margin of about 40 percent versus just over 10 percent for its export division. Orchard said the company paid $383 million in taxes to state and federal authorities last year, versus a net income less than half that amount, $173 million.

During a recent visit to Spring Creek by an Associated Press reporter, massive mechanized shovels at the bottom of the sprawling mine site scooped up 50 tons of crumbling coal with every pass.

They dumped the fuel into the back of huge trucks that lumbered up to ground level, where they tipped the fuel onto conveyor belts, which in turn moved coal chunks as big basketballs into a processing plant where they could be broken into smaller pieces.

From there, it was loaded onto a procession of BNSF Railway cars that would deliver the coal more than 1,500 miles to Vancouver's Westshore Terminals, one of the main coal shipping ports on the West Coast. Unlike domestic sales, where the customer pays for delivery, Cloud Peak would cover the cost to get the coal to Westshore.

The 260-worker mine is the largest in Montana, and manager Bruce Jones said about a quarter of its production — just over 4 million tons last year — now goes into the export market. That's up from less than one million ton just five years ago.

Several industry analysts including Meredith Bandy with BMO Capital Markets in Denver said calculating royalties based on the mine price of coal appeared to be a valid approach under federal law, particularly given high transportation costs for exports.

But she added that given the political overtones of the issue "it's anybody's guess as to what happens" as the government considers changing royalty rules.

Eight firefighters were injured in the blast.
Jul 29th, 2020
Follow Us
Most Recent