The agency is open to Congress considering legislation limiting federal leases for oil and natural gas development near a national park. 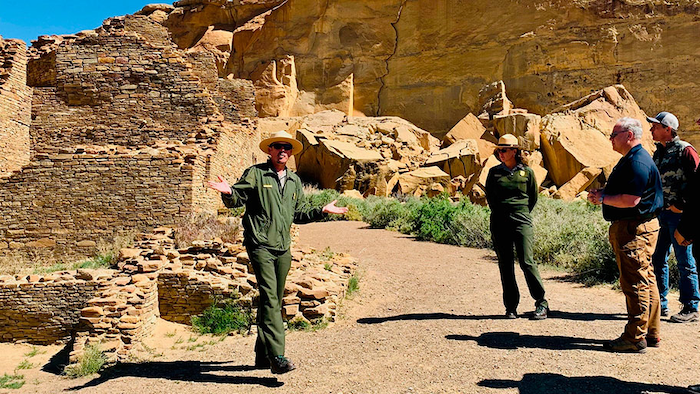 A top official with the U.S. Bureau of Land Management said Wednesday the agency is open to Congress considering legislation limiting federal leases for oil and natural gas development near a national park in New Mexico held sacred by Native Americans.

Michael Nedd, the agency's deputy director of operations, testified before a congressional subcommittee that the agency had no objection to the Democrat-sponsored bill. He said Congress has the authority to dispose of or establish rules for federal property as it sees fit.

"Striking the appropriate balance for public lands use is an important mission that the department takes seriously," Nedd said, mentioning the $1.3 billion in annual revenue generated by development on federal lands in New Mexico and Interior Secretary David Bernhardt's acknowledgement that some areas would benefit from more protections.

The shift in the agency's stance follows a recent visit by Bernhardt to Chaco Culture National Historical Park.

After touring the world heritage site and meeting with leaders from Navajo Nation and New Mexico's pueblos, Bernhardt said the Bureau of Land Management will defer leases within 10 miles (16 kilometers) of the park over the next year while regulators prepare a new management plan for the region's resources.

As part of Bernhardt's commitment, that plan will include alternatives that reflect provisions of the legislation as well as the views of tribal leaders who are seeking permanent protections.

Chaco park includes what's left of an ancient civilization whose monumental architecture and cultural influences have long been a mystery. While the park represents the heart of the area with its towering stone structures and ceremonial kivas, numerous archaeological sites lie outside its boundaries.

Scientists agree the location offered something of a religious or ritualistic experience for its inhabitants centuries ago. Many of Chaco's structures align with celestial events, such as the summer solstice.

It was U.S. Sen. Martin Heinrich who invited Bernhardt to Chaco. The New Mexico Democrat said Wednesday he's optimistic about the path forward.

"This is about listening to tribal leaders and all of the New Mexicans who are calling on us to preserve the integrity of Chaco's irreplaceable resources and the sacred landscapes in this region for future generations," Heinrich said.

The Bureau of Land Management in recent years has put off leasing federal parcels within the buffer zone, but most of the surrounding area is made up of tribal land and allotments owned by individual Navajos.

The legislation would not affect mineral rights on that land, meaning development would still be possible. But many allotment owners are concerned their holdings will be landlocked if the federal parcels are put off-limits.

That would mean millions of dollars in lost revenues for some families on Navajo Nation, which has grappled for years with high rates of poverty and unemployment.

"This is a steadfast personal property right that sustains our livelihoods and way of life," said Delora Hesuse, one of the Navajo allotment owners. "This income is important to us."

Hesuse said lawmakers behind the measure are ignoring Navajos who live in Chaco's shadow.

"Our voices as allotted landowners are being silenced by the environmentalists claiming to speak for all of us," she said.

Environmentalists, archaeologists and a coalition of pueblo leaders from elsewhere in New Mexico repeatedly have called for a moratorium on drilling in the area. Pueblo leaders say their cultural ties to the region are still strong. Some also have concerns about pollution from increased drilling.

While the battle is over what lies beyond the park boundaries, supporters of the legislation usually point to the heart of Chaco in expressing their reverence for the wider area.

U.S. Rep. Deb Haaland, a Laguna Pueblo member, chaired Wednesday hearing. The New Mexico Democrat said Chaco is more than "just a pile of rocks" and that she's astounded when she thinks about the effort it must have taken for the inhabitants to plan and execute such a carefully thought-out community.

Santa Ana Pueblo Gov. Timothy Menchego said he was amazed the first time he visited Chaco, recognizing similar building patterns in his own community more than 100 miles away.

He urged visitors to stand among Chaco's ruins, close their eyes and imagine what it was once like—the smell of smoke and the sounds of a bustling city.

"It's still alive," he said. "All our places of religion and places of power remain alive."