Engineers are deploying a trash collection device to corral plastic litter floating between California and Hawaii in an attempt to clean up the world's largest garbage patch in the heart of the Pacific Ocean. 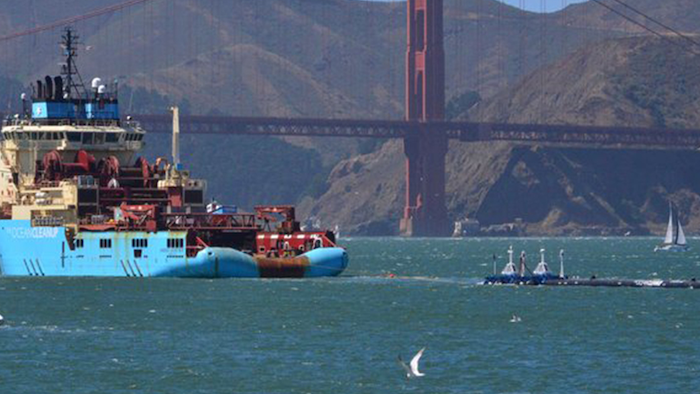 Engineers are deploying a trash collection device to corral plastic litter floating between California and Hawaii in an attempt to clean up the world's largest garbage patch in the heart of the Pacific Ocean.

The 2,000-foot (600-meter) long floating boom is being towed from San Francisco to the Great Pacific Garbage Patch—an island of trash twice the size of Texas.

The system was created by The Ocean Cleanup, an organization founded by Boyan Slat, a 24-year-old innovator from the Netherlands who first became passionate about cleaning the oceans when he went scuba diving at age 16 in the Mediterranean Sea and saw more plastic bags than fish.

"The plastic is really persistent and it doesn't go away by itself and the time to act is now," Slat said, adding that researchers with his organization found plastic going back to the 1960s and 1970s bobbing in the patch.

The buoyant, U-shaped barrier made of plastic and with a tapered 10-foot (3-meter) deep screen, is intended to act like a coastline, trapping some of the 1.8 trillion pieces of plastic that scientists estimate are swirling in that gyre but allowing marine life to safely swim beneath it.

Fitted with solar power lights, cameras, sensors, and satellite antennas, the cleanup system will communicate its position at all times, allowing a support vessel to fish out the collected plastic every few months and transport it to dry land where it will be recycled, said Slat. 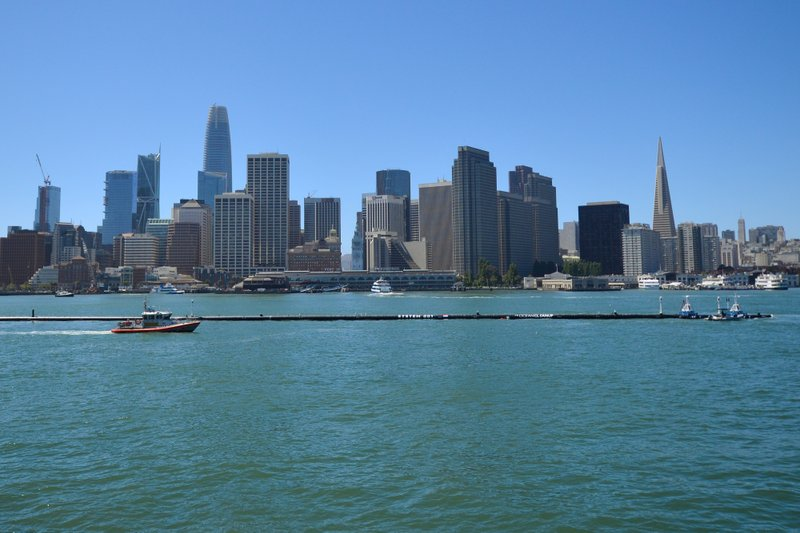 The Ocean Cleanup’s first buoyant trash-collecting device is seen in front of the San Francisco skyline en route to the Pacific Ocean on Saturday, Sept. 8, 2018. Once deployed, the boom will form a U-shaped barrier to trap plastic and trash that currently makes up the "Great Pacific Garbage Patch." (AP Photo/Lorin Eleni Gill)

Shipping containers filled with the fishing nets, plastic bottles, laundry baskets, and other plastic refuse scooped up by the system being deployed Saturday are expected to be back on land within a year, he said.

Slat said he and his team will pay close attention to whether the system works efficiently and withstands harsh ocean conditions, including huge waves. He said he's most looking forward to a ship loaded with plastic coming back to port.

"We still have to prove the technology...which will then allow us to scale up a fleet of systems," he said.

The Ocean Cleanup, which has raised $35 million in donations to fund the project, including from Salesforce.com chief executive Marc Benioff and PayPal co-founder Peter Thiel, will deploy 60 free-floating barriers in the Pacific Ocean by 2020.

"One of our goals is to remove 50 percent of the Great Pacific Garbage Patch in five years," Slat said.

The free-floating barriers are made to withstand harsh weather conditions and constant wear and tear. They will stay in the water for two decades and in that time collect 90 percent of the trash in the patch, he added. 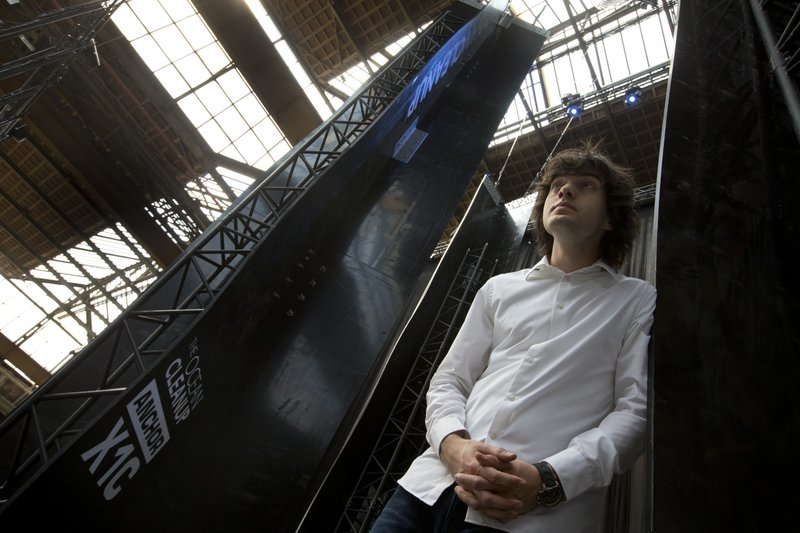 In this May 11, 2017, file photo, Dutch innovator Boyan Slat poses for a portrait next to the anchors of his plastic collecting system, suspended from the roof of a building in Utrecht, Netherlands. Engineers will deploy a trash collection device to corral plastic litter floating between California and Hawaii in an attempt to clean up the world's largest garbage patch in the heart of the Pacific Ocean. The 2,000-foot (600-meter) long floating boom will be towed Saturday, Sept. 8, 2018, from San Francisco to the Great Pacific Garbage Patch, an island of trash twice the size of Texas. The system was created by The Ocean Cleanup, an organization founded by Slat. (AP Photo/Peter Dejong)

George Leonard, chief scientist of the Ocean Conservancy, a nonprofit environmental advocacy group, said he's skeptical Slat can achieve that goal because even if plastic trash can be taken out of the ocean, a lot more is pouring in each year.

"We at the Ocean Conservancy are highly skeptical but we hope it works," he said. "The ocean needs all the help it can get."

Leonard said 9 million tons (8 million metric tons) of plastic waste enter the ocean annually and that a solution must include a multi-pronged approach, including stopping plastic from reaching the ocean and more education so people reduce consumption of single use plastic containers and bottles.

"If you don't stop plastics from flowing into the ocean, it will be a Sisyphean task," Leonard said, citing the Greek myth of a task never completed. He added that on September 15 about 1 million volunteers around the world will collect trash from beaches and waterways as part of the Ocean Conservancy's annual International Coastal Cleanup. Volunteers last year collected about 10,000 tons of plastics worldwide over two hours, he said.

Leonard also raised concerns that marine and wildlife could be entangled by the net that will hang below the surface. He said he hopes Slat's group is transparent with its data and shares information with the public about what happens with the first deployment.

"He has set a very large and lofty goal and we certainly hope it works but we really are not going to know until it is deployed," Leonard said. "We have to wait and see."

The system will act as a "big boat that stands still in the water" and will have a screen and not a net so that there is nothing for marine life to get entangled with. As an extra precautionary measure, a boat carrying experienced marine biologists will be deployed to make sure the device is not harming wildlife, Slat said.

"I'm the first to acknowledge this has never done before and that it is important to collect plastic on land and close the taps on plastic entering into the ocean, but I also think humanity can do more than one thing at a time to tackle this problem," Slat said. 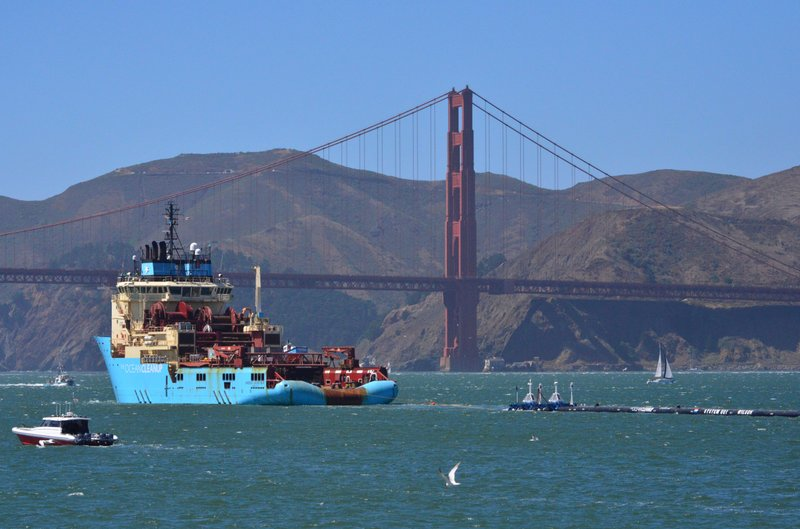 A ship tows The Ocean Cleanup’s first buoyant trash-collecting device toward the Golden Gate Bridge in San Francisco en route to the Pacific Ocean on Saturday, Sept. 8, 2018. Once deployed, the boom will form a U-shaped barrier to trap plastic and trash that currently makes up the "Great Pacific Garbage Patch." (AP Photo/Lorin Eleni Gill)